Giants running back Saquon Barkley had to be carted off after suffering an ankle injury in the first quarter on Sunday. Barkley was later ruled out for the game, along with quarterback Daniel Jones (concussion protocol) and wide receiver Kenny Golladay (knee). 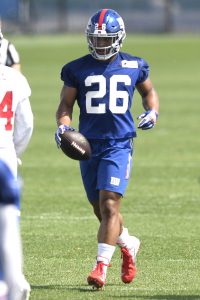 Barkley’s left foot bent the wrong way after a collision with Cowboys cornerback Jourdan Lewis. An overhead shot of the injury (Twitter link via Will Brinson of CBS Sports) showed severe swelling. That likely indicates a lateral inversion sprain, according to Dr. David J. Chao (on Twitter). Additional testing will confirm what Barkley is dealing with, but it sounds like he’ll miss a few games at minimum.

Jones was the next star to go after clashing helmets with linebacker Jabrill Cox. Mike Glennon stepped in for Jones, and he may get the call again next week if Jones needs additional time to recover. Now, Golladay has also been ruled out for the game, leaving the Giants offense severely shorthanded. Beyond those three, they’re already without wide receivers Sterling Shepard (hamstring) and Darius Slayton (also hamstring), plus left tackle Andrew Thomas (foot).

The Giants entered today’s game at 1-3, dead last in the NFC East.