Giants cornerback Sam Beal pleaded guilty to a pair of gun charges, as NJ.com’s Zack Rosenblatt writes. The charges stemmed from a June 2020 arrest in Ohio. Now, he’ll be on probation through June of next year. 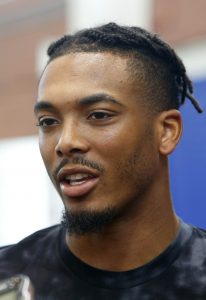 Beal was arrested roughly one year ago today after cops pulled him over and found him with a concealed weapon. One charge is for illegal carrying; the other is for improper handling of the gun. He was also cited for marijuana possession and a traffic violation.

The Giants took a chance on Beal by taking him in the third-round of the supplemental draft in 2018. However, he was forced to redshirt his rookie year after shoulder surgery. There was some talk that Beal could start in 2019, but a hamstring issue cost him most of training camp and the entire preseason and the club was forced to place him on injured reserve in September. Then, he opted out of the 2020 season.

Beal’s odds of making the Giants’ cut this year weren’t looking too great, especially since he joined the club before the arrival of head coach Joe Judge. The legal issues won’t help matters.

If the Giants cut ties, it’ll go down as one of Dave Gettleman‘s biggest misses in recent years. By using a 2018 third-round supplemental pick on Beal, the Giants coughed up their 2019 third-rounder in the regular draft. All in all, Beal has played just six times across three seasons.