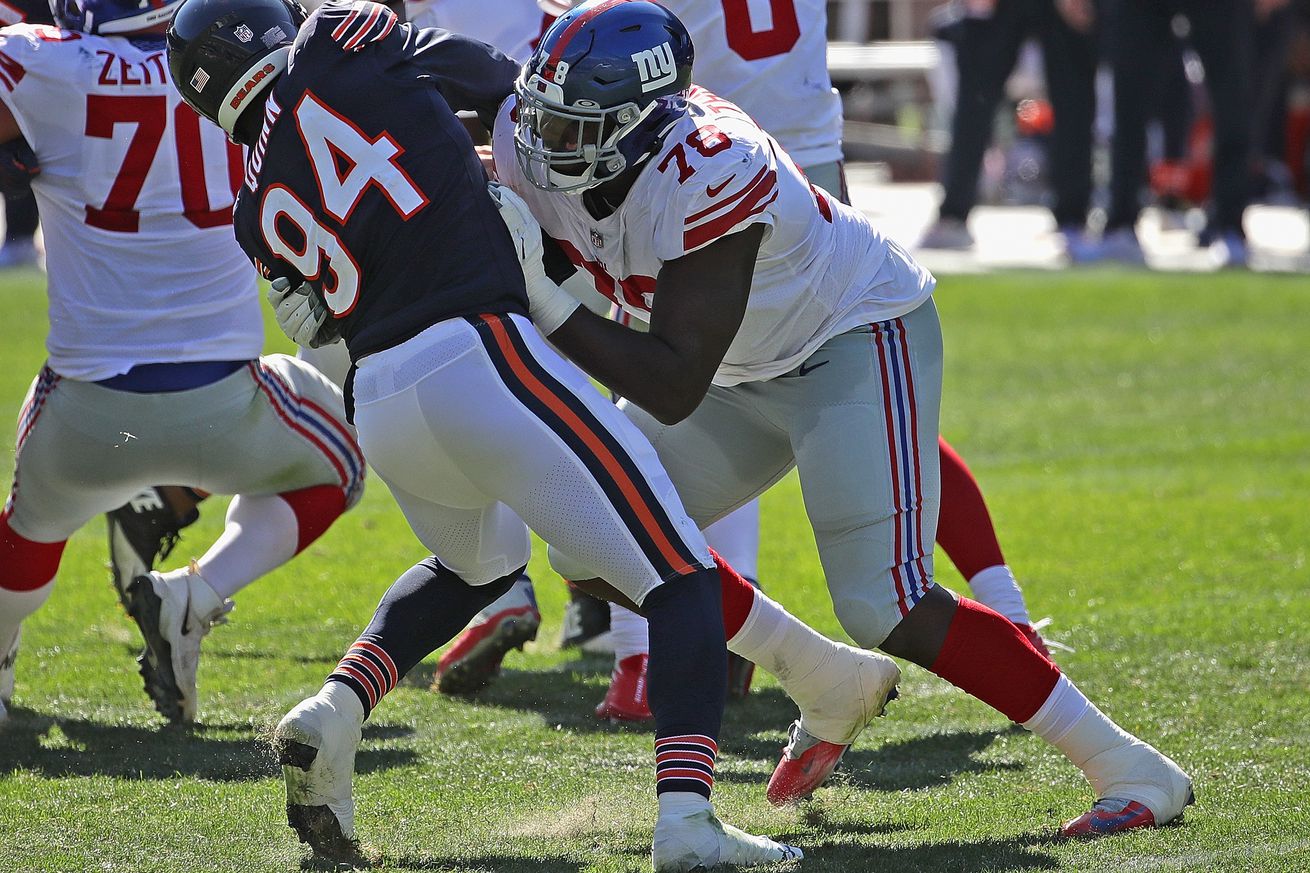 The Washington Football Team drafted Chase Young No. 2 overall in the 2020 NFL Draft to terrorize opposing quarterbacks. The New York Giants drafted Andrew Thomas no. 4 overall to protect Daniel Jones and anyone else who plays quarterback for the team.

The two meet Sunday for what could be the first of many matchups in the seasons to come. They won’t line up head-to-head consistently as Washington moves Young around their defensive front consistently.

Their performances will no doubt be compared by analysts and by fan bases of struggling teams looking for signs of brighter days ahead. Their head-to-head reps scrutinized and dissected. Conclusions will be drawn, and have actually already been drawn, about both players. Which is downright silly entering the sixth game of their rookie seasons.

Thomas vs. Young, though, will get a lot of attention when the 0-5 Giants host the 1-4 Washington Football Team on Sunday at MetLife Stadium.

“I’m sure Andrew’s going to be fired up for it. I’m sure they’ll both be fired up for it. I don’t think I’m going to have to push him extra this week,” said Giants offensive line coach Marc Colombo. He’ll be ready for the challenge, and it will be a challenge. It’s a good pass rusher, really good pass rusher. It’ll be exciting to see that matchup. I’m looking forward to it.”

Draft analysts expected the former Ohio State star to be a difference-making pass rusher right away, and that has been the case. Young missed Week 4 and the majority of Week 3 with a groin injury, but he has 2.5 sacks, a forced fumble and 2 quarterback hits in 3+ games.

The Young hype machine is already in overdrive. One writer indicated Young may already be Washington’s best player. Another went way beyond that, skipping a few steps and heading straight to gold jacket happy talk

“Chase Young is that type of guy where he is going to just be dominant for somewhere between 10-15 years,” Springs said.

Thomas has been anything but dominant

GM Dave Gettleman said after the draft that the Giants selected Thomas, along with Matt Peart and Shane Lemieux later on, to try and fix the offensive line “once and for all.”

“We’re doing what’s best for the Giants and we feel this move is best for the New York Giants right now,” coach Joe Judge said after the pick. “I think this is going to be a tremendous move right now to help Daniel (Jones) play more confident back there.”

So far, Thomas hasn’t fixed anything. It has, in fact, largely been because of his play that Jones has been under pressure on 43.8 percent of his drop backs, per Pro Football Focus, most in the league.

Thomas has surrendered a league-high 28 pressures, one of only four tackles to have give up 20 or more. Only Geron Christian Sr. (5) of Washington has given up more sacks than Thomas (4). Thomas’s 47.4 PFF pass blocking grade is worst of 36 qualifying tackles and his pass blocking efficiency score of 92.2 is worst of 26 qualifiers.

Giants’ offensive line coach Marc Colombo is, though, far from ready to join some quick to judge members of the fan base in deciding Thomas is a bust, anointing him as Ereck Flowers 2.0.

“Andrew’s capable of being a dominating left tackle in the NFL. I truly believe that. He’s gone against some really good competition, he’s done well at times and at times not so much,” Colombo said via Zoom this week. “A lot of good learning opportunities for Andrew and I truly believe after the amount of pressures and stuff that he’s seen this year, the amount of pass rushers he’s seen he’s really going to be better for it.

“Consistency with him is a key, and that’s me just harping on him every day.”

How does it get better for Thomas?

This is a 21-year-old kid facing the best competition he has ever seen while playing for a team without an established line or quarterback, a new offensive scheme and no offseason.

“Andrew’s young. He’s really young. He’s a rookie, and he’s going to go through some growing pains, but he’s getting better and he did a lot of good things in the game the other day. Used his hands, got a few plays we need to talk about, a few things we need to clean up but for the most part it’s just harping on the details,” Colombo said.

The comparison to Flowers, the failed 2015 first-round pick, is easy to make. It’s also off base, in my view. Thomas is not an uncommunicative young man who is uncomfortable in New York, which Flowers always was. He also does not appear unreceptive to coaching, which some thought Flowers was.

“He’s a great kid. He wants to get better. He asks all the right questions. He works really, really hard out on the field,” Colombo said. “My big challenge to him this week is to show him what he did well on film and be able to to replicate that. Be consistent, that’s it.

“He has some fight to him. If you watch that Dallas game he was aggressive, and it’s what we’re looking for. Sometimes when you’re overly aggressive you get a little out of control.”

“Andrew has faced really the elite rushers of the NFL in his first five games,” Garrett said. “That’s really the nature of his position. The biggest challenge that he’ll have and that all offensive tackles in this league have is, you’re not going always going to win. The other guys are good too. They are going to have success pushing the pocket, getting around the quarterback. You just have to keep coming back and learn from the experiences.”

“I think about a guy like Tyron Smith who we had in Dallas. When we first got him there, he was going against DeMarcus Ware in practice every day. To be honest with you, right at the start he didn’t do very well. DeMarcus Ware really got after him. As it went along in training camp and is it went along when they competed against each other, Tyron started to win some. Then he started to win some more of them and then it would be back and forth and then it was 50/50. Then he started to win more than half,” Garrett said. “That’s really what these guys have to do. They have to keep battling, keep learning from their experiences. Be mentally tough, be physically tough. Technically, become better and you’ll grow and improve as a player over time. There’s no questions it’s one of the most challenging positions in football. To block these elite rushers every week – Andrew has done a nice job so far. He’s going to get better and better as we go.

Thomas had his best run blocking game of the season Sunday against the Dallas Cowboys, but surrendered a sack and eight pressures, ending up with his lowest PFF pass-blocking grade of the season.

Colombo said it’s time for Thomas and the rest of the offensive line to stop taking “baby steps” of improvement and that “we’ve gotta start making leaps.”

The most important thing Thomas needs to do is prove to opposing pass rushers that he can close off their inside move. That has been a constant problem thus far.

“What he’s doing is he’s snapping out of his stance and he’s kind of over-shooting his target,” Colombo said. “When you put that on film you’re going to get a heavy dose of it. … He’s gotta realize one thing — focus on your target. If your target’s the inside number, that’s it. Wherever that target goes, you go.

“He’s getting excited, he’s trying to set out there with quickness, you know, handle the speed. He’s got feet to handle the speed. The inside move, it’s a cardinal sin for an offensive lineman to lose inside. That’s something really we’re going to push here moving forward because it does keep showing up. That’s something that Andrew’s gotta get fixed, that’s something I’ve gotta do a better job coaching him on what keys to look for when the guy’s going to come inside. And he’s got to know that every single defensive end has watched it and seen it have success and you’re going to get it all game. Until you shut it down, you put it on tape shutting down the inside move you’re going to get it every time.”

It sure would be nice if Thomas would begin to take the leap Colombo is looking for this Sunday. The fact that Young will often be lined up across from him makes it even more important.