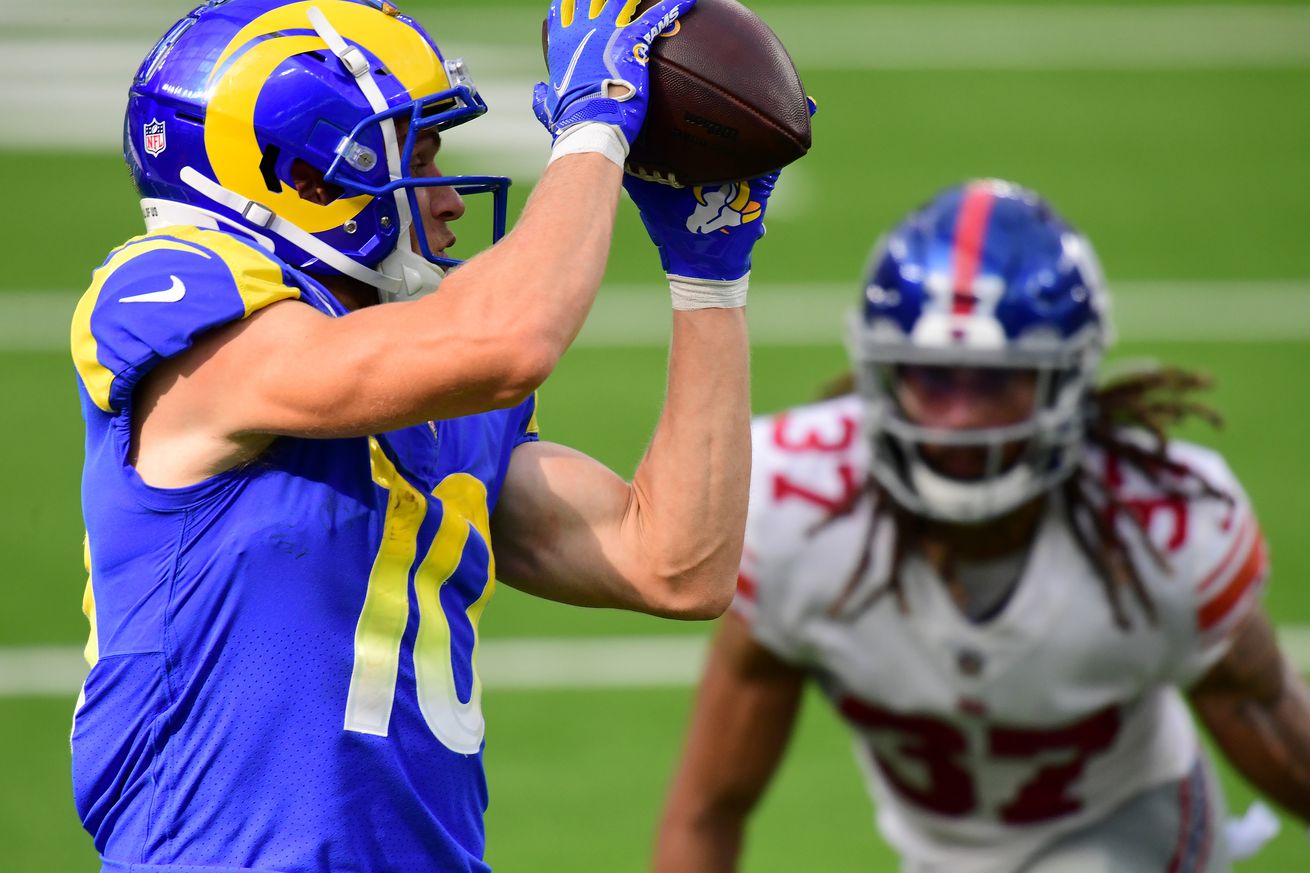 At the end of the Giants’ Week 3 matchup against the San Francisco 49ers, Isaac Yiadom was benched in favor of Ryan Lewis. Despite Yiadom’s struggles, Patrick Graham gave him a short leash to start once again vs. the Los Angeles Rams, but it only took a quarter before Lewis found his way back onto the field in favor of Yiadom.

Lewis, who spent part of the 2019 season with Graham in Miami, is a 26-year-old 2017 undrafted free agent journeyman out of Pittsburgh. He’s 6-foot, 195 pounds, and he was picked up by New York after the Washington Football Team waived him at the beginning of September. Lewis played 18 snaps against the 49ers and 42 against the Rams. In the Rams game, he was targeted 6 times, surrendering 4 receptions for 41 yards.

The struggles of Yiadom were evident on tape, and it gave offensive coordinators a glaring liability to attack, along with Devante Downs when the Giants were in nickel sub-packages. Lewis is an upgrade; he’s a more balanced, quicker, smoother, athlete than Yiadom. His footwork is solid, as are his hips and transitions. There are times in zone where he’s put into a tough position to cover the outside, and he’s really forced to flip his hips, which we saw twice against the Rams, but the technique he used is coached for the type of three deep look the Giants have been running.

New York is playing Cover 3 cloud to the field on Robert Woods (17). Lewis is to the bottom of your screen and takes the motioning Cooper Kupp (10). Kupp splits the numbers after his motion and Lewis, whose responsibility is the deep third to the boundary, lines up directly over the top and about 6 yards off Kupp. It’s second and 8 and at the snap Lewis goes into his Cover 3 backpedal with his back to the sideline; this is done in order to funnel routes inside to the middle hook defenders and the deep middle of the field closed (MOFC) safety. He has to respect the speed of Kupp, so he gives the cushion and basically gives Jared Goff and Kupp an easy pitch and catch for a short gain. If Lewis was a bit more square, and a bit more outside, it may have mitigated the probability of the completion of this easy out route. When a corner is in zone, funneling routes inside with his back to the sidelines, it leaves the outside vulnerable because the corner has to flip his hips and stay tight to the wide receiver, which isn’t easy when you have deep responsibilities. The thought process is to give up these short gains in order to stop bigger ones. It’s not a knock on Lewis, but something to monitor because it did happen twice, in two different types of coverage.

I feel like he’s in a better position on this play, albeit Woods is inside of the midline of the numbers, but Lewis is on top of Woods route. Lewis bites on the subtle inside plant by Woods and then the receiver does a good job pivoting outside and forcing Lewis to flip his hips. These are short gains that are tough to stop with that technique. This specific coverage on the play above is man MOFC with a six-man pressure package. I’d like to see him be a bit more square with his post snap back pedal in this type of coverage.

Lewis is in Cover 3 bail that was disguised as two-high pre snap. It’s difficult to defend quick game, three-step, passing concepts when executing the bail technique, and Lewis falls victim to that on this 6-yard curl from Josh Reynolds (11). Logan Ryan drops down to cover the flat, but the Rams were too quick. It is important to note that Lewis’ primary responsibility is the deep third to the field. He needs to ensure he’s in the best position to execute that coverage assignment, so defending these quick passing concepts from bail technique is difficult, especially with his hips pointed to the goal post as he bails.

The Rams decided to line up tight a lot against the Giants who bring a five-man pressure package at Jared Goff. Graham called an excellent game and the Giants dropped into zone dominating the middle of the field, but watch how Lewis adjusts, multiple times, throughout this play pre- and post-snap. Los Angeles motions Woods to Lewis’ side at the snap and Lewis doesn’t miss a beat. He quickly flips his hips, senses the wheel route, restricts Woods’ space, and rides him off the red-line while staying inside the hip pocket of Woods, and keeping his eyes on quarterback Jared Goff. This is a benefit to playing the technique that was maligned in the previous three clips. Lewis eyes Goff down, and watches as the quarterback’s eyes transition to the deep cross from Reynolds. Then Lewis leaves Woods’ route, in a controlled, balanced manner, and explodes up field towards Reynolds. The throw was possibly purposely overthrown by Goff. Lewis looks quick, balanced, athletic, and in position throughout the entirety of the rep.

This is another good example of zone technique with a five-man pressure package. The Giants loved bringing the nickel blitz with Darnay Holmes against Jared Goff. Lewis gives up a reception on a quick post/curl route, but Lewis is in a good position to execute his assignment. He’s outside and over the top of the receiver, and he’s funneling the receiver towards Tae Crowder, who is in middle hook zone near the hash. The Giants’ linebackers seem to be instructed to turn towards the strength of the offensive formation when gaining depth in their zone drops; this play is a 3×1 set, so both Crowder and Martinez turn to the strength which is the field side. This is one of the many reasons why Graham and the Giants were able to control the middle of the field. On this play, Lewis tries to funnel the receiver to Crowder, but the post/curl was the perfect route for the receiver to sit in between the coverages of Lewis and Crowder. It’s another bang bang play for a minimal gain, but it wasn’t a glaring mistake by Lewis.

Lewis does a nice job in a middle of the field open (MOFO) Cover 2 defense against San Francisco. The 49ers are in a third and 9 and the play design is meant to high-low Lewis who is the flat defender. Lewis does a great job eliminating the honey hole and forcing quarterback Nick Mullens to go somewhere else with the football. Lewis is aware of the running back in the flat, but he’s reading the out breaking route from the stack. He senses the rounded break and outside stop and sinks to a depth where he forces Mullens to feel uneasy about pulling the trigger on that throw, which seemed to be his second read (glanced at the seam from the tight end, but Blake Martinez covered that well). This is a good understanding of space and threat; he could have easily relied on the deep half safety to make an impossible play and cover the underneath throw, but he didn’t; he sunk beyond the sticks and eliminated two routes. Too bad Mullens found another receiver for the first down.

This is a bit of insight into the communication and switch coverages that the Giants ran against the Rams. It’s a 3×2 set with three defenders to the boundary, and Lewis, Logan Ryan, and Lorenzo Carter dropping off into coverage. We can see the communication by Ryan to Lewis to drop and take the deep route in this zone match, three deep, type of defense. The Giants bring 4 rushers, Ryan takes the flat, and Lewis transitions to the seam route. This play works because the communication and because the Giants are playing MOFC. That seam is breaking into a deep safety, so Lewis can switch and take outside leverage against the seam, while Tyler Higbee runs towards the deep safety. There was a quick window for Goff to throw this ball (with Julian Love focusing on the field and not the strength), but the movement and zone match elements, along with the pre snap assumption that Ryan was going to take the vertical from the No. 2 or No. 3 threw him off, so he checked the ball down to Woods.

This is Lewis in man coverage playing very good trail technique against the Rams. It’s third and 10 and the Rams are tight. The Giants bring five men and are in Cover 1 man, where corners typically line up with outside leverage as well. There’s a single high safety in Adrian Colbert (34), who is on the field side. Logan Ryan is the other safety who drops down to the middle of the field and eyes the running back. Ryan is protecting the middle of the field as Martinez takes Malcolm Brown (34). Lewis is at the top of the screen and makes contact up the stem of the receiver; he rides the outside shoulder in man coverage of the receiver, gets to the outside hip, and essentially runs the receivers’ route for him. This is excellent trail technique inside the divider line with safety help. It would take an incredible throw for the Rams to complete this pass over the top of Lewis.

Here’s a similar rep against the 49ers. Has single high safety help, but watch how patient he is at the line of scrimmage; he doesn’t allow a clean release and he forces the receiver inside. Once the receiver attempts to stack and turn back outside, Lewis flips his hips, gets his head around, and doesn’t come close to allowing the receiver to break phase with him. These man coverage reps are solid from Lewis.

Above are two clips of hard nosed tackling. One being on special teams, which is still valuable and important.

Lewis is an upgrade over Yiadom, but he still has much to prove. His athletic ability, reactionary quickness, apparent football intelligence, physicality, and man coverage skills are solid. Although he’s intriguing, his real test will come this week at Dallas. The Cowboys have a trio of receivers that are all very good in Amari Cooper, CeeDee Lamb, and Michael Gallup. Lewis should see a lot of Gallup, who is a very good receiver on a stacked offense. Kellen Moore may see Lewis and target him frequently because of his inexperience, and due to the presence of James Bradberry on the opposite side of the field. Sunday will be a big day for Lewis, who will be placed in several tough positions by Dallas. If he steps up to the challenge, the Giants just might have found a solution at the second cornerback spot for the rest of 2020.