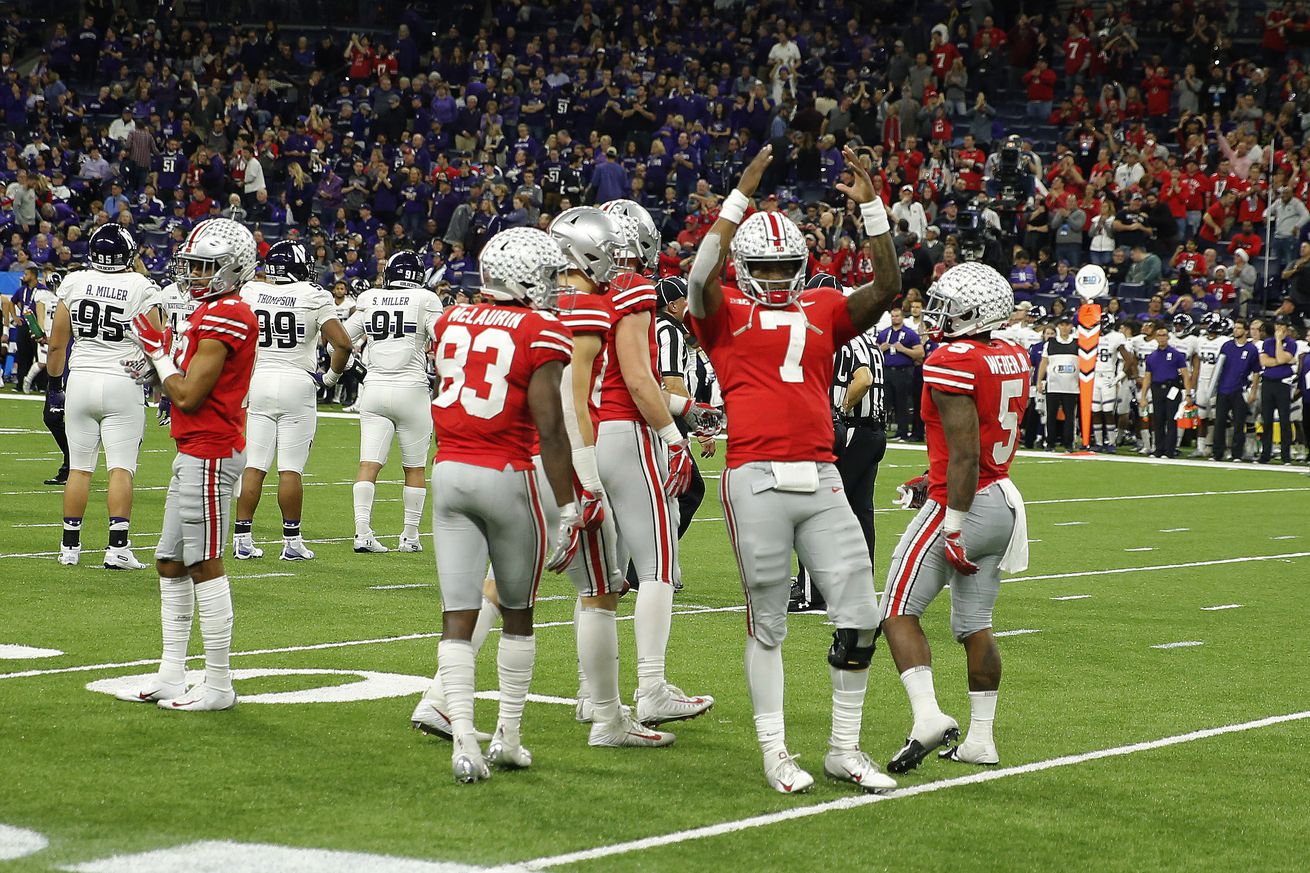 The 2019 NFL Draft is officially one week away. Teams are in the final stages of setting their draft boards and top decision makers will spend the upcoming holiday weekend discussing strategy.

There have been so many rumors and news nuggets, as well as so, so, much smoke billowing out of the various outlets that it is a bit hard to keep track of everything. So let’s take this opportunity to go back and take a second look at some of the things we might have missed for all the noise.

Catching up on Dwayne Haskins

Predicting who the Giants will draft at sixth overall is, as Ed has described it, a “crap shoot.” But we do know they at least appear to have done their due dilligence on the 2019 quarterback class. A huge contingent of the Giants’ top brass hit the road to watch Kyler Murray, Dwayne Haskins, Will Grier, Drew Lock, and Daniel Jones in person, then bringing them in to their facilities for Top 30 visits.

The last of those visits went to Dwayne Haskins, who the Giants hosted for the draft version of a slumber party. The last day of official visits was Wednesday, April 17th, and the Giants’ leadership had dinner with Haskins on the night of the 15th before hosting him in their facilities for his official visit on the 16th.

The #Giants are hosting #OSU QB Dwayne Haskins on a 30 visit today and tomorrow, source said. They were also out in full force at his Pro Day, preparing for pick No. 6.

We don’t know how the Giants feel about Haskins, but he is saying all the right things. In a guest appearance on Ian Rapoport’s podcast, Haskins said that he welcomed the opportunity to sit behind Eli Manning, saying “Eli Manning is a legend. I grew up watching Eli and I’d have no problem sitting behind him and learning from him, like how I did with J.T. [Barrett] at Ohio State,” Haskins told NFL Network Insider Ian Rapoport on the RapSheet and Friends podcast. “Whatever team drafts me, I’ll be able to sit back and learn from the guy that’s there and be able to compete with him and push him, but know that a guy’s there because he’s a veteran, he’s done it before, he’s professional.”

That has to appeal to a Giants team which is still all-in on Manning as their best option at quarterback.

It also has to appeal to the local media as well. It’s fair to say that if the Giants select Haskins, it will be the Football Gods’ gift to the NYC back pages. A “local boy made good,” who went to the Giants’ youth camps after the team beat the 18-0 New England Patriots, getting to live out his dream by quarterbacking the team he grew up loving? The human-interest stories practically write themselves.

In a nice shake-up from the endless deluge of mock drafts that make up most of our media diet this time of year, Spencer Hall put together a “Reverse Mock Draft” over on the SB Nation main page. Essentially, it looks at the top prospects as though they were free agents who could sign wherever they wanted.

Perhaps unsurprisingly, he pairs Haskins and the Giants as an “ideal” match.

The one thing I definitely know about Haskins: He already knows that it is very smart to get the ball to fast people quickly, and then let them do the work. This seems basic, but a lot of college quarterbacks never learn this. This refusal to learn the value of a checkdown can be awesome viewing: See Rex Grossman, RGIII in college, or even Russell Wilson, who was an accomplished and shockingly efficient chuck-and-ducker in college.

To that point: Haskins was calling swing pass audibles in high school. So if someone could just put him in at QB for the Giants and have him throw a hundred short passes to Saquon Barkley in the flat, that would be great.

He’s ideal in more ways than one. The sometimes miserable life of a New York football player is fine here: Haskins originally committed to Maryland, and then switched to Ohio State. Quality of life is obviously not a top concern, nor is good weather or cost of living. Haskins is fine riding trains and eating hot pressed sandwiches standing up for the rest of his life.

Giants fans wouldn’t even have to adjust to new flaws. Eli Manning has slow feet? Well, the big knock on Haskins is slow feet, too. It’s not a flaw, Giants fans. It’s tradition.

I would definitely encourage everyone to check out the whole piece. It’s a nice change of pace and an entertaining read.

Quinnen Williams? Well, the Giants can dream, can’t they?

Haskins wasn’t the only last-minute Top – 30 visit for the Giants. A day after the Giants hosted Haskins, they had Alabama defensive lineman Quinnen Williams in for a visit.

Quinnen Williams scheduled to visit #Jets (4/16) & #Giants (4/17). Prediction: Both teams will love him. @QuinnenWilliams made great impression in 15-minute interviews in Indy, incl on white board. Personal story is moving. Jets could have — will have — enormous decision at 3.

Quinnen Williams (as opposed to Alabama offensive tackle Jonah Williams) isn’t likely to fall to the Giants at sixth overall. He is widely regarded as one of the three best players in the draft, and commonly called the best player in the draft. But it is within the realm of possibility, and he is the one player we can say unequivocally that Dave Gettleman would draft regardless of who else is on the board.

There’s a reason why I say that the Giants would select Williams over any other player in this draft: Dave Gettleman loves him some defensive tackles.

In a piece for The Ringer, looking at some of the biggest draft tendencies in the NFL, Robert Mays identifies the defensive line, and defensive tackle position in particular, as the apple of Gettleman’s eye.

It takes a confident man to feel comfortable saying “hog mollies” every time he steps in front of a microphone, and Dave Gettleman is that man. Throughout his tenure with both the Panthers and the Giants, Gettleman has made no secret of the fact that he likes to build through his defensive line. In his first draft in Carolina, in 2013, he took two defensive tackles in the first two rounds (Star Lotulelei and Kawann Short). Three years later, with both players still on the roster, Gettleman drafted defensive tackle Vernon Butler with the 30th overall pick. Gettleman has overseen six drafts as a GM. His team has taken a defensive lineman in the first three rounds in five of those drafts.

Possible targets: All of them.

That Gettleman loves defensive linemen shouldn’t be much of a surprise as it is a trait he shares with Jerry Reese (who drafted either an offensive lineman, defensive lineman, or both in the first three rounds of eight of his eleven drafts) and both of them learned under Ernie Accorsi.