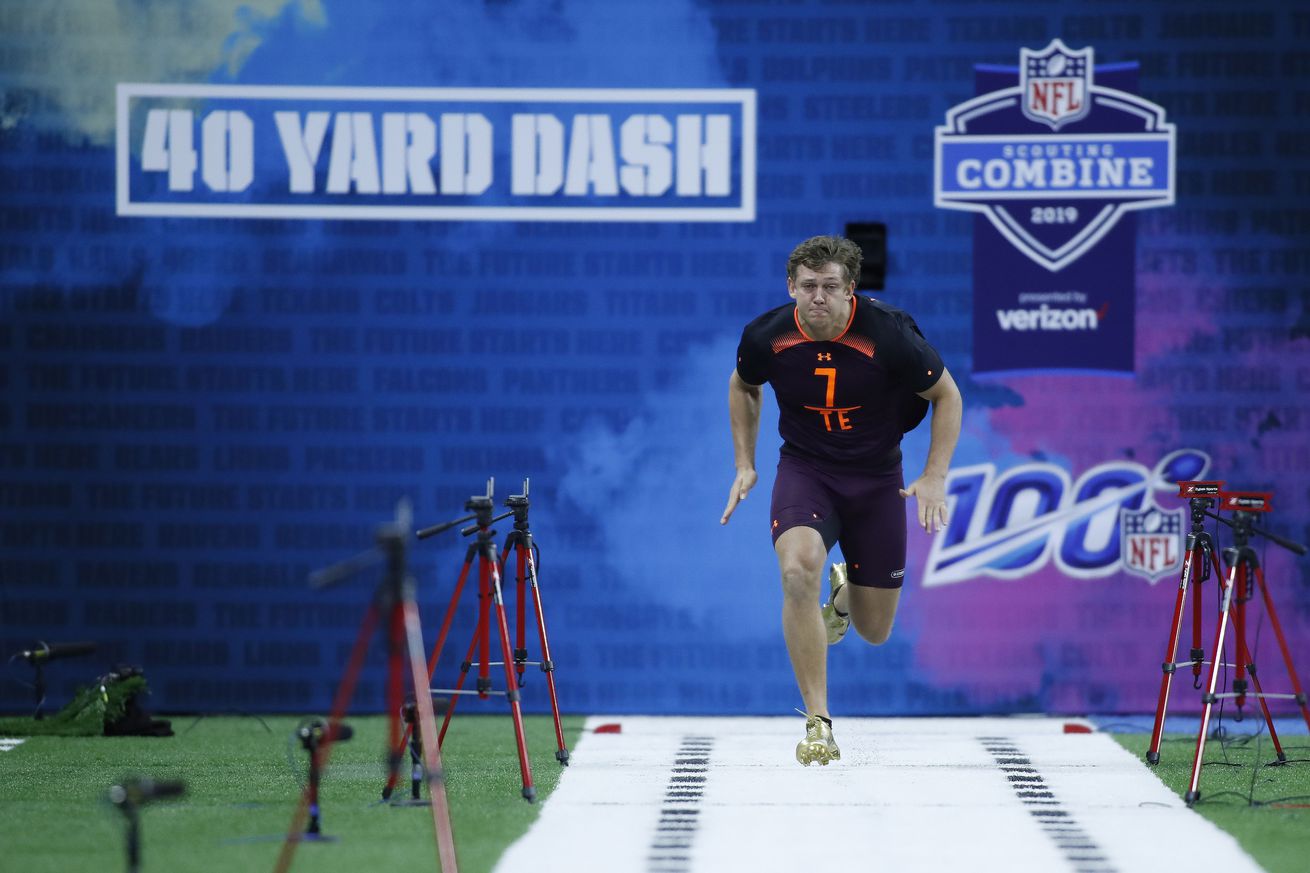 Edge rusher at No. 6? Nah, how about a pass receiver?

With now single days until the 2019 NFL Draft, there is still a question of what the New York Giants will do in the first round. With 12 picks total, there are questions surrounding what the entire weekend will entail, but specific questions still surround the sixth and 17th overall picks. It appears the Giants aren’t going to target a quarterback at No. 6 and if that’s the case, I personally don’t think it makes much sense to go for one at 17 — especially if that quarterback is Daniel Jones, who does not project favorably as a first-round pick.

By now, we’ve all seen versions of the same mock drafts for the Giants, so let’s do something a little different for this seven-round mock. And I mean really different:

I realize we’re going to have to spend a lot of time here with the reasoning for this pick and I promise there is reasoning that went into this selection. First, we’ll get into Hockenson as a player. He’s really good, you guys.

Despite being relegated to the more traditional tight end role next to a pass-catching tight end like Noah Fant at Iowa, Hockenson was the more productive receiver. Here’s how they compared in 2018 with stats from Bill Connelly at Football Study Hall:

Hockenson isn’t as athletic as George Kittle, the former Iowa tight end who somehow lasted until the fifth round in 2017, but he’s still a well above average athlete and his combination of receiving and blocking ability makes him an easy plug-and-play starter from Day 1.

Now, let’s get into some bigger picture reasons for why this could make more sense:

What the Giants didn’t do enough of last season, though, was pass from 12 personnel. 12 personnel is generally treating like a running formation… and that’s kind of the point. Teams still expect the run with multiple tight ends on the field. They react more often with base personnel and stack the box more often. Passing out of 12 personnel is like running play action without having to fake the handoff. Look at the difference between passing effectiveness in 11 and 12 personnel across the NFL in 2018:

Some of the league’s smarter and more progressive teams took advantage of that last season. Both the Kansas City Chiefs and Philadelphia Eagles were among the team who used 12 personnel more often than the Giants last season. Kansas City passed 66 percent of the time from that grouping and Philadelphia did so 61 percent of the time. The Giants, though, only passed 42 percent of the time. That could serve as a positive for the Giants in 2019 with teams expecting the run from that personnel grouping. Then add the value of Hockenson and Engram as the pass catchers on the field.

– Offense is more important than defense: Welcome to the NFL in 2019. Offense just matters more. Of the final eight teams in the playoffs last season, five of them were in the top-5 of offensive DVOA. None of them were in the top-5 of defensive DVOA. There has to be some level of competency on defense — and we’ll get to that — but a stud player on offense is going to matter more than one on the other side of the ball.

Of course, the Giants can’t run out the current defensive depth chart they currently have — improvements are needed. EDGE is the biggest hole on the roster, but one way to make the job of a pass rusher easier is to have a good secondary behind it. A stud pass rusher is great, but that doesn’t matter if a receiver is running wide open for the quarterback to hit quickly. A stud corner, though, could lock down that receiver and give a pass rusher more time to get to the quarterback. A top corner will also play more defensive snaps than a top pass rusher.

We discussed this theory a little at the end of the season with the Giants — they had an above average pressure rate on defense, but the problem wasn’t the lack of creating sacks, it was that the secondary couldn’t hold up long enough for the pressure to matter. With the secondary as currently constructed, that would likely be the case again regardless of who was rushing the passer.

Enter Greedy Williams. Williams measured in just under 6’2” at the combine and ran a 4.37 40. Both are ideal measurements to put outside across from Janoris Jenkins. That would also allow Grant Haley to play the slot and not thrust Sam Beal into a major starting role from the outset. Per Sports Info Solutions, Williams played 62.7 percent of his coverage snaps in man last season and allowed just 33.8 percent of targets to be completed against him. The biggest “concern” for him is his tackling, which feels like a nitpick for a corner who only allowed a third of passes thrown his way to be caught.

We’ll put these two together, for obvious reasons. Instead of taking a swing on a top-tier pass rusher earlier in the draft, we can double up in the second and third round. By average expected Approximate Value, using picks 37 and 95 (17.2 AV over five seasons) would be a little less than expected for using the sixth overall pick (23.2) but more than using the 17th overall pick (16.6) on EDGE. But in the best case scenario, where you get two productive pass rushers instead of one, that’s a bigger impact for the defense.

Winovich gets a rap as a “high motor” player, but he also has the athleticism to make that type of drive matter. His 115.4 Speed Score (weight-adjusted 40-time) was the fifth-best for this edge class at the Combine. He only had five sacks in 2018, but was consistently in the backfield with 17 tackles for loss and 25 run stuffs. His 11.8 percent pressure rate could have been better, but his athleticism and technique make that an OK bet early in the second round.

Ximines is a small school prospect out of Old Dominion, but has enough production to translate even while his Combine testing left a little to be desired. He was 10th among this edge class in pressure rate with 17.5 tackles for loss, 12 sacks, and 24.5 run stuffs, which was third to only Winovich and Sutton Smith in this group of edge rushers. He also came out favorably in Football Outsiders’ SackSEER projections, which has him as the seventh best pass rusher in this class, with a better statistical profile than Clemson’s Clelin Ferrell.

Tackle is another position where ideally it would get addressed earlier, but in this mock, it works out just fine. This is a position that needs an upgrade for the Giants, but luckily the bar at right tackle is pretty low and the value of going from there to average is better than average to elite, per a Pro Football Focus study.

Scharping brings value on both sides of the line. He started most of his games at left tackle but has experience on the right side. Per Sports Info Solutions, he was an above average pass blocker at tackle with a blown block rate of 1.36 percent and he is one of the best run blocking tackles in this class with a blown block rate of just 0.72 percent. Scharping didn’t do a full workout at the combine, but he came out above average in every test he participated. This is a potential starter in the fourth round. At worst, he’s a high-level swing tackle.

Jennings is one of my favorite under the radar wide receivers in this class. He didn’t get the hype of David Sills for the Mountaineers, but Jennings was the more productive receiver. By Target Yards Added, West Virginia averaged 3.32 more yards when Jennings was targeted than when a pass was thrown to anyone else on the roster. That number was negative — minus-1.76 — for David Sills. Only three players in the draft class came in above average in Target Yards Added, Positive Play Percentage against man coverage, and Positive Play Percentage against zone coverage (per SIS) — Emanuel Hall, JJ Arcega-Whiteside, and Jennings.

Dogbe is an athletic, disruptive presence on the interior of the defensive line. Last year for Temple, Dogbe had seven sacks and 20.5 run stuffs. That run stuff number was only behind Quinnen Williams and Gerald Willis in this interior class. He’d be a perfect rotational piece to go along with B.J. Hill and Dalvin Tomlinson.

We don’t have an athletic profile for Coney because he didn’t test at the Combine, but he’s done two things really well over his career at Notre Dame: cover and not miss tackles. This late in the draft and in this linebacker class, that’s better than you could ask. Coney was a tackling machine last season with 125 combined tackles — 60 solo with just two broken tackles per SIS. On 19 passes, he allowed just 3.3 yards per target and he allowed just 4.4 yards per target over 35 career passes thrown his way.

Redwine is an excellent athlete — 89th SPARQ percentile among safeties — and has experience at both safety positions. He mostly lined up as the single-high safety for the Hurricanes last season, but also spent 20.5 percent of his snaps in the slot, per SIS. He also blitzed on 6.3 percent of his snaps. He’d be an immediate special teams contributor and would be useful No. 3/4 safety who could be moved around the field.

Depth and versatility are key for these late picks. Udoh tested as an above average athlete at the combine — 60th percentile per SPARQ — and comes with the versatility to play both tackle and guard. He started most of his games at right tackle for Elon, but played some guard his freshman year and took reps there during the Shrine Game practices, where he embraced the move.

Brailford comes with an injury risk — it’s why a 78th percentile athlete coming off a 10-sack season is available in the seventh round — but because it is the seventh round it’s well worth the risk. Although he has played 13 games in each of the past two seasons. He also brings some versatility with snaps at off-ball linebacker this past season for Oklahoma State. Brailford is not yet a polished pass rusher, but with some development could turn into a useful rotation piece.

Pollard represents the two things the Giants don’t need on this roster — a running back and slot receiver — but if the Giants are going to add to the running back rotation, might as well get a player who also excels in the passing game. With 7.1 yards per carry last season and 58.6 percent of his snaps coming in the slot for Memphis, he’s basically a more athletic version — Pollard ran a 4.31 40 — of Jaylen Samuels, who was drafted in the fifth round and saw success last year with the Pittsburgh Steelers. Pollard is also a dangerous kick returner with seven career kick return touchdowns over the past three seasons.