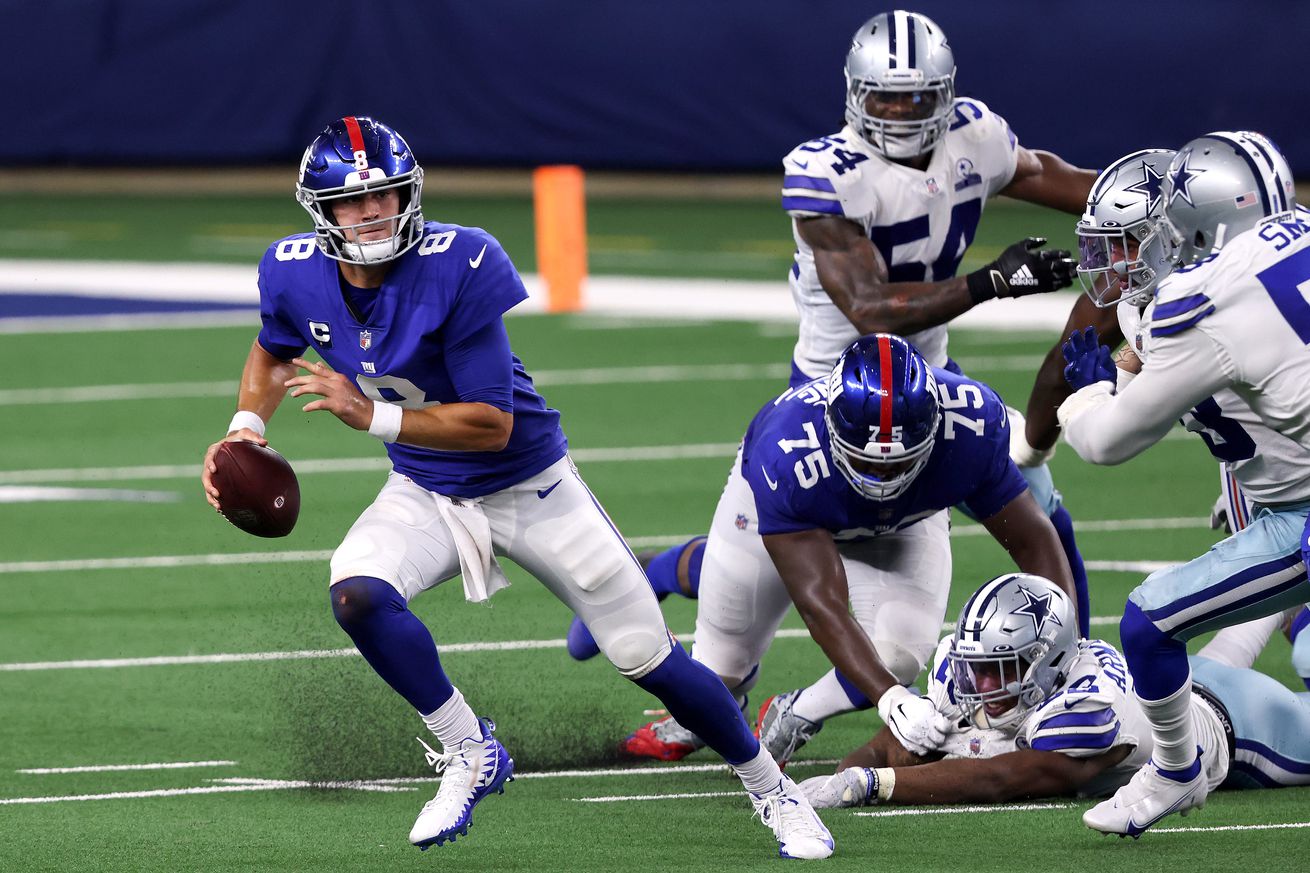 Jason Garrett, Patrick Graham and Thomas McGaughey highlighted the play of Blake Martinez, James Bradberry and Graham Gano, among others

After a disappointing couple of weeks in which the Giants offense was unable to find the end zone, they finally had an offensive presence in their 37-34 loss to the Dallas Cowboys last Sunday. The most points they had scored in a single game before Sunday was 16 points.

Daniel Jones’ performance was neither good nor bad. He finished the game with 20 completions in 33 attempts for 222 yards, no touchdowns or interceptions and one fumble.

Garrett said that Jones is getting more comfortable in the system with each rep in practice and games.

“Quarterbacks, like all the players, it’s just a matter of repetition,” Garrett said. “Being in different situations, running plays against different looks. It just takes time to do that, it takes some experience to do that. I think there have been a lot of positive things over the course of the first five games for Daniel and for our offense. Obviously, there is plenty of areas we need to improve upon. Hopefully, over time there will be more positives and few negatives.”

As Jones continues to find his stride, Garrett’s creative play calling against the Cowboys revealed a side of the Giants offense that fans had not yet seen, including the fake field goal that resulted in a touchdown by Evan Engram (that was eventually overturned) and the two-point conversion to Andrew Thomas.

“Plays like that are typically in game plans week after week and you’re looking for the right opportunity to call those kinds of things,” Garrett said. “Some weeks you might be more apt to call them based upon where you are or what the defense is doing. Other weeks, you might have them in but a little bit less likely to call them. You always want to attack the defense different ways.”

Executing creative plays such as these requires explosive players. In the past, Garrett has called Engram one of the team’s most impactful players. But through five games this season, Engram has been largely silent on the field, recording just 18 receptions for 147 yards and no touchdowns. His longest catch is for 22 yards.

“There have been some really positive plays that he’s made over the course of the first five games,” Garrett said. “Certainly, areas where he can get better and we can get better. Offensive football is a collaborative thing, it’s everybody. The success you have running the ball, blocking them up front, protecting with your offensive line will impact all your skill players. Evan has done a good job taking advantage of some opportunities we’ve given him and certainly we are trying to create more and more for him and for all our guys.”

One player the Giants have seen more consistent offensive production from is Darius Slayton. He has 23 receptions for 365 yards and two touchdowns.

“It seems like any time we go in his direction, he’s able to make plays for us,” Garrett said. “Whether they are little plays or big plays. He continues to grow as a young player that’s not played that much football as this level. His approach is outstanding as a professional.”

Another young player that Garrett has watched grow is former first round pick Andrew Thomas, citing the rookie’s matchups against some of the most elite rushers in football in his first five games, including Kahlil Mack, DeMarcus Lawrence and Aldon Smith.

“He’s certainly gotten his indoctrination to the National Football League by playing against really good players,” Garrett said. “That’s really the nature of his position. The biggest challenge that he’ll have and that all offensive tackles in this league have is, you’re not going always going to win. The other guys are good, too. They are going to have success pushing the pocket, getting around the quarterback. You just have to keep coming back and learn from the experiences.”

In Graham’s press conference this week, he highlighted the play of a number of guys on defense, beginning with cornerback Ryan Lewis.

The question of who would fill the second cornerback role alongside James Bradberry has been asked week after week. The Giants may finally have their answer in Ryan Lewis. According to Pro Football Focus, Lewis allowed four receptions on six targets for 41 yards, playing 74 percent of defensive snaps at the position.

Graham said that he was proud of Lewis’ performance and does not fault him for the two catches that Cowboys receiver Michael Gallup made late in the game.

“We always say it’s day to day with the competition, but Ryan did a good job on Sunday for us,” Graham said. “I always look at it like this, I could have done a better job putting him in a better spot. (We’re) moving forward, but I wouldn’t hold it against him. They get paid to play as well.”

Linebacker Markus Golden is another player who saw an increase in snaps against the Cowboys last week following the injuries to Oshane Ximines and Lorenzo Carter.

“I can’t speak for him but getting used to the system, different terminology, getting comfortable with what we ask those guys to do,” Graham said. “He’s done everything we’ve asked him to do. The half sack last week, the play on the back side of the run against the Rams. He comes to work every day and he gives me that look, ‘Pat, I’m ready to go.’ You guys have met him, I know you can’t meet anybody now, but when he gives you that look that he’s ready to go, he’s looking through your soul, I like that. That let’s me know we have a defensive player.”

Graham then shifted his attention to players on the Giants defense that have emerged as mainstays throughout the first five games of the season: Blake Martinez and James Bradberry.

“Blake is playing the best football I’ve seen him play,” Graham said. “I think the way he’s approached it this year and really grabbing the scheme of being our signal caller, being the leader of our defense. I think he’s really taken hold to that. I think that stands out to me, the fundamentals are showing up. The tackling, the foot work, how he’s affecting the pass game, both in the rush and in coverage.”

Martinez has emerged as such a natural leader on the Giants defense that Graham said he has to make a conscious effort not to put too much on his plate.

“He doesn’t have to put everything on his shoulders,” Graham said. “I have to let him play. I have to get that right for him. I have to do a better job of not putting too much on him, let him play.”

As far as the secondary, Graham said that Bradberry’s commanding presence on the perimeter allows him to isolate a particular receiver or frees up a guy to help somewhere else on the field.

“For James’ unique set of skills, the ball skills are there, the way he breaks up passes,” Graham said. “His reaction and his anticipation are there, that helps us in terms of when we’re in our zone coverages. In man coverage, his ability to sink his hips and stay with his man and have good eye control. I have to mention this, too, Bradberry tackles, too, that’s another thing. People talk about the coverage part, but he’s playing cloud corner, crack replace off of four under, three deep.”

As far as taking on division-rival Washington on Sunday, Graham said that the focus needs to be on pressuring the quarterback, whether that be Kyle Allen or Alex Smith.

“We have to figure out ways to affect the quarterback, whoever is playing quarterback this week,” Graham said. “What I mean by affect, what I would prefer, whether it’s sacks, I want to win a game, first and foremost. I want to make sure after the game, did the quarterback feel us? That’s what I want to understand, did he feel our presence? Does his body feel us, does he have a hard time picking up his kids the next day? That’s how I would feel good.”

The majority of the questions McGaughey received this week were, of course, about the failed fake punt that would have resulted in a touchdown by Engram if not for an illegal shift penalty.

McGaughey expressed his frustration at not being able to execute the play, particularly because it is a “one and one type of deal” that the Giants will not be able to attempt again for a long time.

“It was a few things that went wrong,” McGaughey said. “But ultimately, at the end of the day, we didn’t get it done. That’s the disappointing part of it. When you get a chance to make a play like that, you have to execute the play.”

Kicker Graham Gano helped lessen the blow of not being able to execute the trick play because he was a perfect four-for-four on field goal attempts. McGaughey praised Gano’s range and consistency.

“Obviously, a couple years ago he hit a 62-yarder to beat us when he was in Carolina,” McGaughey said. “The guy is very talented. He has an extremely strong leg. He has a lot left in the tank.”