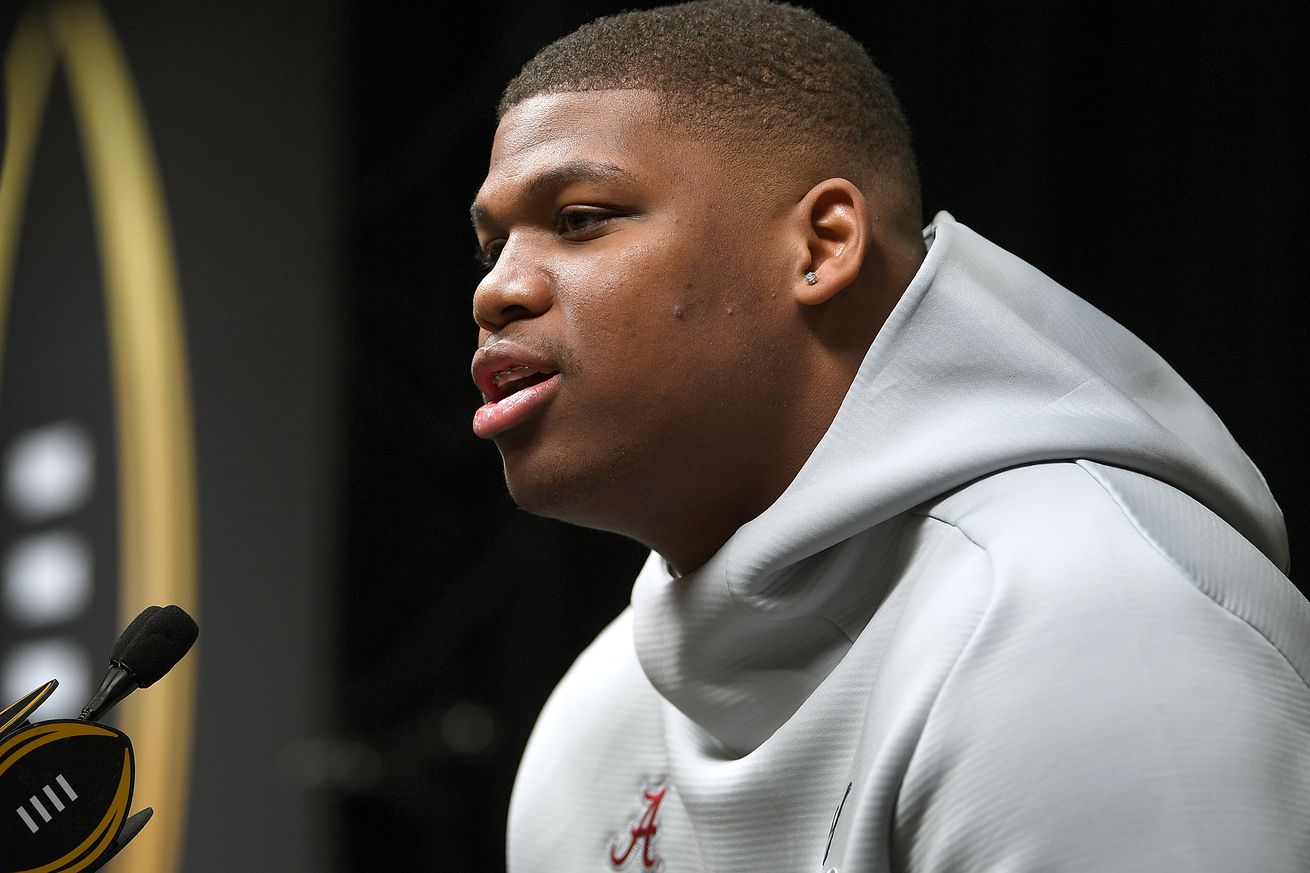 Quinnen and Jonah Williams to Giants in this scenario

As we draw closer to the 2019 NFL Draft, here is another 7-round New York Giants mock draft scenario for you to consider.

This one uses the simulator at The Draft Network, which means no trades. My only real ground rule as I did this draft was that I decided not to use a pick on a quarterback in the early portions of the draft.

Remember, this is a scenario. It’s understood that the draft won’t unfold exactly this way and that players will sometimes be available in spots where they shouldn’t be. The seventh round of this mock provides an example of something that is, truthfully, unlikely to happen. Still, the draft is inexact and unpredictable, so players will often be selected earlier or later than anticipated by the draft community.

We have discussed this scenario. Didn’t matter who else was on the board. Williams fell here. There are some who believe Williams is the best player in the draft, and there was no way I was letting him get by. If this happens in the real draft, the Giants will feel like they won the lottery.

There is more and more chatter that Williams could be the first tackle selected and could be off the board in the top 10. Here, he is still available at 17. I will happily plug him in at right tackle.

A number of strong possibilities here. I will take the guy who could be the long-term answer at safety after learning from Antoine Bethea for a year. Easy to argue that one of the cornerbacks would also be a solid choice.

Perhaps the Giants will consider the idea of using Evan Engram more as a wide receiver. That would be one reason to make a pick like this. Another would simply be to potentially upgrade the inline duo of Rhett Ellison and Scott Simonson. Draft analyst Matt Waldman spoke highly of Knox on a recent ‘Valentine’s Views’ podcast.

Knox is a raw talent with limited playing experience but has huge upside. He has the ability to grow into a No. 1 tight end at the next level, but it may take a while for him to get to that point.

The Giants might be in a position to give him that time.

Arcega-Whiteside is 6-foot-2, 225. He offers a body type and a skillset that could be a nice complement to the Giants smaller receivers. I will happily snag him here before the big middle of the draft run on receivers limits the choices.

Odd spot in the draft here. The board I was staring at was filled with running backs and wide receivers. I didn’t want to go there. There wasn’t real value at positions of need like cornerback or center. Even though I already selected Williams in Round 1, I took Howard simply because he is a high-value, high-upside prospect who probably should have been off the board long before this pick.

I’m still staring at a board filled with running backs and tight ends. The Giants could easily be looking for a back to compete with Wayne Gallman to backup Saquon Barkley, and Anderson offers size at 224 pounds and upside, albeit with a risky injury history. I will take the chance this deep into the draft.

As with the last two picks, I’m staring at a board filled with running backs and tight ends. No desire to go in those directions. The Giants need to add depth to their defensive line rotation. That’s what I try to do here. Weirdly, Keke is the 142nd ranked player on the board, taken with the 143rd pick.

This turns into a nod to Mark Schofield and Matt Waldman, big Rypien boosters who think he has a chance to outperform his Day 3 draft stock. Yeah, I know. Another mid- to late-round quarterback and you’re tired of the Giants taking those. I’ve got 12 picks, though, people. Cut me some slack!

Alright, already! The top eight choices on the board here are wide receivers. I guess the Draft Gods are telling me to take one. I hope they’re happy now.

Honestly, I do think the Giants will take a sixth- or seventh-round flier on a receiver. It might not be Fulgham, but on this board with the choices I have and the values the players are assigned he’s the guy I am going with.

OK, Draft Network folks, why is Bryant still available to me in Round 7 with the 232nd overall pick? He’s a guy who should come off the board in the middle rounds. Somehow or another, in a draft filled with edge rushers, this board never really presented me with proper value at that position. That — weirdly — gets fixed here.

Gotta pick somebody, right? Might as well be a player with some upside and special teams ability at a position of need.