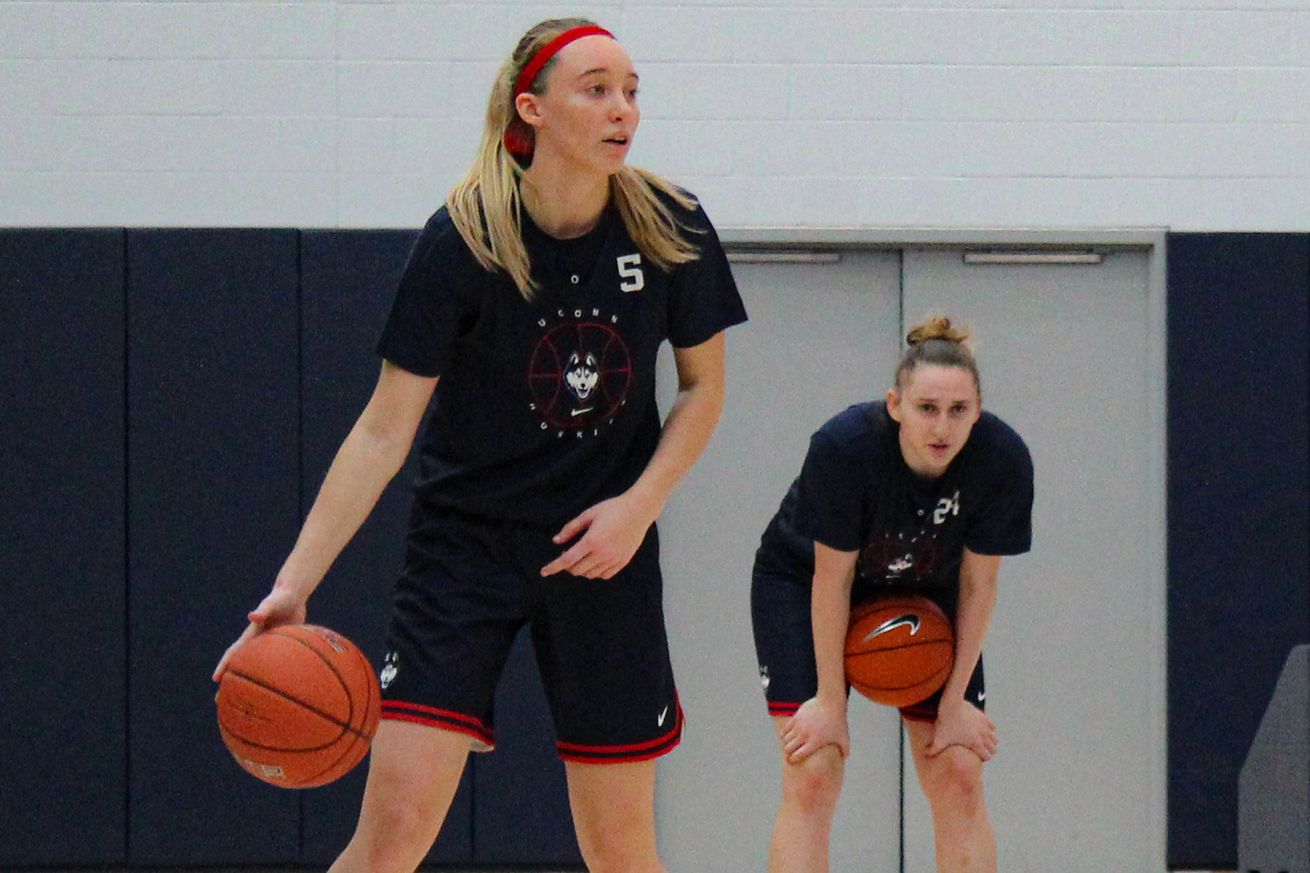 The freshman also has ties to one of the newest members of the coaching staff.

Welcome to the UConn WBB Weekly, a recap of everything that happened in the world of UConn women’s basketball over the past week.

The Weekly is a newsletter! Subscribe to get it in your inbox every Thursday at 7 a.m. before it hits the site.

From The UConn Blog and Storrs Central:

Over the past few months, we’ve kept up with where former Huskies are playing overseas through social media. Now, with the help of Winsider’s new WNBA overseas tracker, here’s a nearly exhaustive list of where former UConn players are suiting up abroad this winter:

UConn will have two graduates of Hopkins High School in Minnesota in the program for the next two seasons: Freshman Paige Bueckers and new graduate assistant T’Aire “Tee Tee” Starks.

Starks is a 2015 graduate of Hopkins, which means the two didn’t play together. She spent two years at Iowa State, where she missed most of her true freshman campaign due to injury and eventually transferred to Arizona ahead of the 2017-18 season. Starks only ended up playing one season with the Wildcats in 2018-19 and missed her final season due to injury.

Despite the age gap, Bueckers knows Starks well from back in Minnesota.

“Me and her are really close. She was like a big sister to me,” Bueckers said. “She played at the same high school as me, Hopkins, when I was in seventh grade and I was thinking about attending Hopkins. My AAU coach, Tara Starks, [T’Aire is] her daughter so we’ve been really close for a long time.”

From the moment Paige Bueckers committed to UConn, she instantly drew comparisons to former Husky stars: The next Diana Taurasi. The best high school prospect since Breanna Stewart. A transcendent talent like Maya Moore.

But after spending some time with Bueckers throughout the preseason, Geno Auriemma had a different comparison for her.

“He calls me Paige Kardashian all the time, but I just laugh,” she said with a smile. “He’s a funny guy.”

“She’s my idol. Paige is famous for being famous,” Auriemma explained with a heavy drip of sarcasm. “So I kid her all the time about it.”

Geno isn’t afraid to throw a jab or two the freshman’s way. The two frequently go back-and-forth at each other — something that has gone on ever since she committed to UConn.

“Yeah, he gets on me all the time but that’s what I wanted. That’s why I came here,” she said. “He’s really hard on me but we have that open communication to where I can ask him a question or he can ask me a question and it’s just respect both ways. He jokes around a lot but it gets serious too and we have those serious conversations and I can go to his office to watch film ask him to break down anything and he’ll do it for me. I really enjoy that.”

Though she just might be the most-hyped women’s basketball recruit ever — she’s the only female high school athlete to appear on the cover of SLAM magazine, her highlight tapes routinely went viral on social media and her list of high school accomplishments stretches to the floor — Bueckers carries herself like any other freshman.

“I don’t think she can believe all the stuff that’s out there about her because that’s a 180 away from who she really is on the court with our players. You would never know, except for her talent,” Auriemma said. “You’d think somebody that’s famous, somebody that has all this would take it for granted. She’s in the gym all the time working on her game…she hasn’t been walking around or acting like [she’s] any different than anybody else. ‘I’m just a freshman coming into a big-time program trying to find my way.’”

Bueckers agreed with Auriemma’s assessment that she’s “famous for being famous” because she knows her high school resume won’t do her any good at the college level. If she’s going to be a great player at UConn, it means starting from a clean slate.

Though Bueckers maintains a humble attitude, she’s not lacking self-confidence.

And it’s fun for Bueckers’ teammates, too.

“[The other players] love playing with her because when they’re open, they get the ball,” Auriemma said. “And when she’s open, they throw it to her and she scores.”

“I’m really excited to play alongside her,” Christyn Williams said two weeks ago. “We did transition drills and I love it. I’m running and she just throws the ball. I love it.”

“I’m so excited to play with her…she’s a great passer. She sees the court really well,” Anna Makurat added. “She’s a shooter, she can drive to the basket, she can do all the things on the court. I hope she’s going to stay aggressive. She’s a special talent.”

Auriemma once said that every player in the history of the program except for Maya Moore struggled throughout their first year, so there’s no reason to believe Bueckers will be any different. But — similar to Williams two seasons ago — has openly acknowledged and accepted that fact.

For now, Bueckers isn’t getting ahead of herself. She’s just working on her footwork, getting stronger and doing her best to keep the coaches happy.

“I don’t really have a specific thing, basically just whatever coach asks me to do whatever helps the team win and if that’s being a playmaker being unselfish shooting. Getting stops at the defensive end whatever it is that they asked me to do that’s what I’m working on the most.”

And if Bueckers can eventually reach her full potential, maybe she can revive a UConn program that has gone a grueling four years without a national title.

“Hey, it’s just great to be in the presence of greatness, be in her aura of celebrity-ness,” Auriemma joked. “I mean, we’ve been such a downtrodden program for all these years, we needed that savior to come in here and save us. She’s the anointed one. I’m waiting for the three magi to come bring me some gifts for having her.”

Come for the new unis

The first look at Paige Bueckers in a UConn uniform:

how it started how it’s going pic.twitter.com/kU9NzhmNyi

This might be the best use of the meme template:

how it started: how it ended: pic.twitter.com/u86p1y8Acr

Is this good? I think it’s good:

A couple leftover quotes from the availability with Geno Auriemma and the captains from two weeks ago: