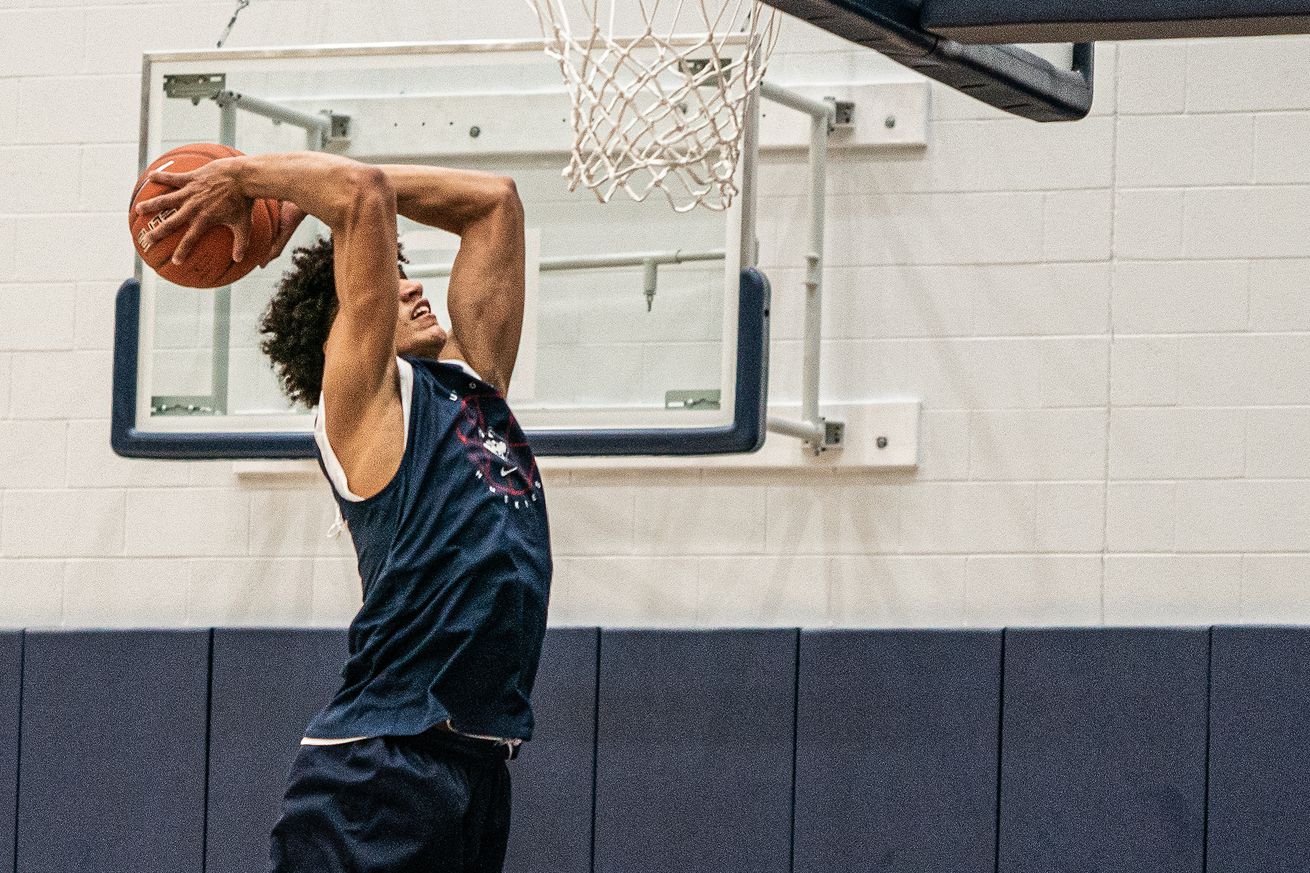 In a practice that head coach Dan Hurley called more physical than any the team had last year, it was no wonder that the two freshman big men, Adama Sanogo and Javonte Brown, were at the center of the action.

The combination of an intense offseason gains factory led by new strength coach Mike Rehfeldt and a firehose of new information in a pre-practice film session led to a fierce first practice for the newcomers.

“Adama right now, I would imagine him and Javonte are in the back room with steam coming out of their ears and eyes and mouth because it was like overload today, it was their first college practice and, oof, it was a lot,” Hurley said on the freshmen’s first full college practice.

““Everybody got a lot stronger, and when you get stronger it builds a lot of confidence, especially battling in the paint, and you see it especially with a the younger guys,” Isaiah Whaley added.

The practice battles between Sanogo and Brown are bound to continue throughout the season, as minutes at the four and five position will be hard to come by during the season. Akok Akok, Whaley and Josh Carlton will have an edge to start with their experience, and Hurley tended to run quite a few lineups last year with Tyler Polley as a power forward before the now senior forward suffered a season-ending knee injury.

“It’s competitive for every position, everybody is talking a lot of junk, trying to get under each other’s skin, but at the end of the day everybody knows we need to work together to make sure there’s no weak link in the team,” Whaley said

Whaley might have been UConn’s breakout star of 2019-20, but he still has work to do to hold off the new guys looking to steal his spot and become breakout stars themselves. But before we get too far ahead of ourselves here, the freshmen still have a long way to go in order to just get themselves up to speed during a college practice.

“I was messing up a lot which I expected as a freshman stepping into something new, I’m going to have some adjustments I have to make, different things I have to improve on. I’m not really taking this as a bad thing, I’m just taking it as I have a long way to go and a lot to improve,” Andre Jackson said.

Jackson has been getting some help from some of the senior members of the squad. Hurley said that James Bouknight and RJ Cole have taken more of a leadership role in the team, helping the younger players adjust to life at UConn.

“The way that James [Bouknight] is modeling for the young guys, he’s modeling a lot of the play in and play out intensity and urgency that Christian [Vital] brought to the program last year,” Hurley said. “In the game-speed reps and live drills, James is setting a pace that makes the other players keep up.”

Bouknight and Cole developing into leaders can only mean good things for the Huskies as they start their new seasons in the Big East, and team chemistry will only improve through further tough, hard-nosed battles in Hurley’s famous practices this season.