Up 7-3 at the start of the second quarter, Anthony Queeley went into motion before the snap. As the ball was snapped to Garrett Shrader, Queeley lined up directly behind Courtney Jackson outside the right hash, and began running toward the middle of the field.

But once Queeley got to the 16-yard line, he cut toward the right side of the field. As he got closer to the end zone, Queeley was wide open. Shrader dropped the pass in, and Queeley put his hands up in front of the Syracuse crowd, signaling the touchdown he had just hauled in.

Queeley’s touchdown reception put SU ahead 14-3 against No. 19 Wake Forest, and it gave the redshirt sophomore his second score of the season. After recording no receptions in two of the Orange’s first four games, Queeley scored a touchdown in each of Syracuse’s last two games.

The increase in production comes following the departure of SU’s top receiving option, Taj Harris, who entered the transfer portal on Oct. 3. Harris’ departure opened the door for Queeley, Jackson and Damien Alford to see more passes from Shrader.

“Whoever’s not out there, we just have to step up as a unit,” Queeley said. “We’re a whole family, we just gotta get the job done and step up.”

Harris was a three-year starter at wide receiver for Syracuse, and he earned All-Atlantic Coast Conference honors in 2020 after ranking fifth in the league in receptions per game. In head coach Dino Babers’ up-tempo, pass-first system, Harris was the go-to guy for quarterback Tommy DeVito to pass to for two straight years.

Without Harris, Shrader will likely look to Queeley increasingly more as a passing target, Babers said. While Harris was a lanky, 6-foot-2, 180-pound speedy option at wideout, Queeley is a stronger 6-foot-2 and 205 pounds. Queeley’s path to Syracuse started in the weight room at Lake Nona (Florida) High School, and it has continued after he arrived in central New York.

When Queeley first arrived at Lake Nona, he competed on the high school’s weight lifting team and focused on lifting 300 pounds on the bench press like Lake Nona’s previous Division I receivers. And on weekends, Queeley went to the YMCA that Kisha worked at to do cardio and lift. 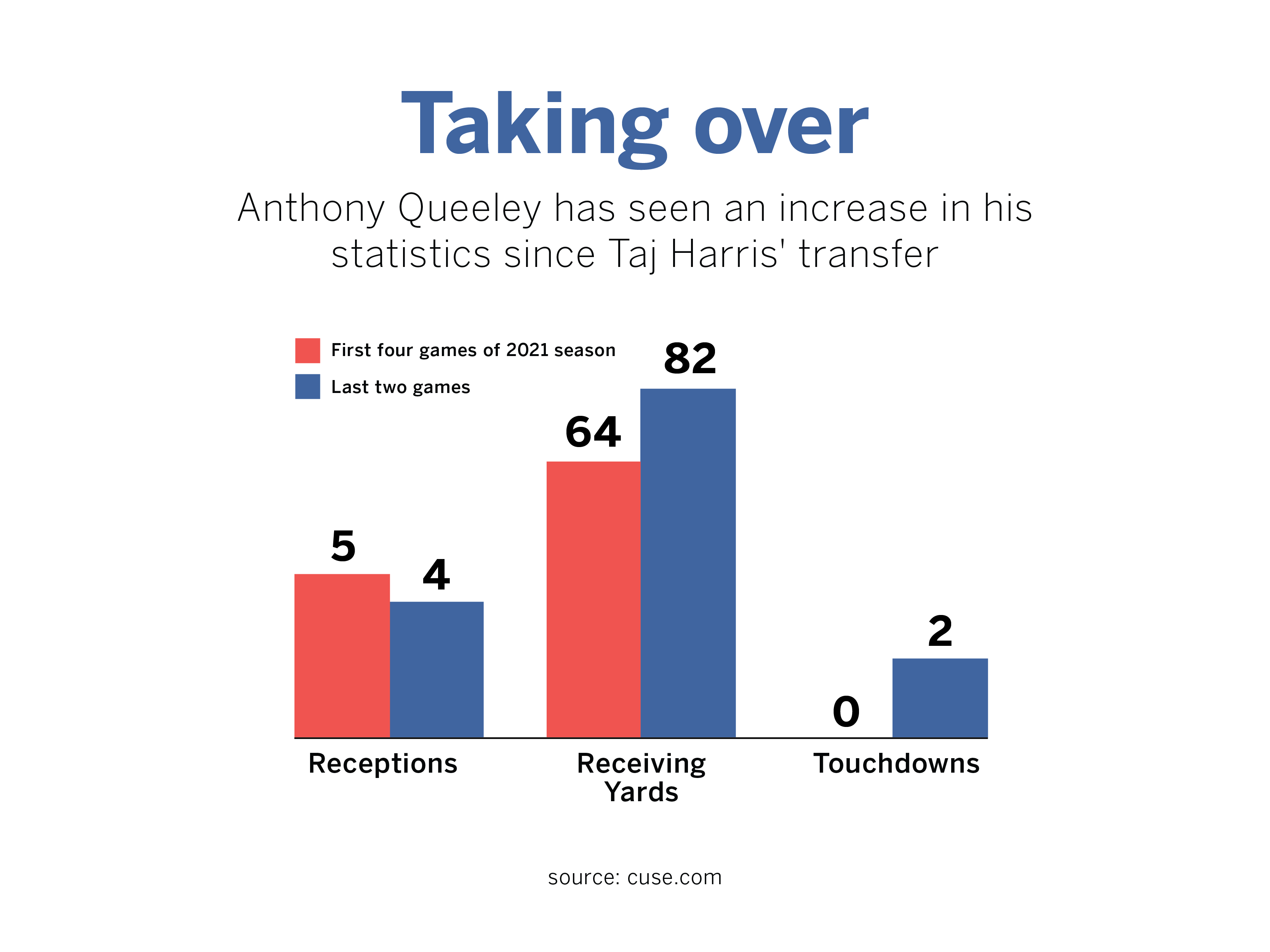 By his junior year, Queeley was one of the top lifters in the county, his high school coach Anthony Paradiso said. And by his senior year, Queeley used his strength to create mismatches against linebackers and safeties.

“He just lived in the weight room,” Paradiso said. “He was just dominant … with his training and everything he did here.”

Queeley redshirted and continued working on building his frame after coming to Syracuse in 2018. When he arrived back at home in Orlando, Florida, after his freshman year, Kisha said she was impressed by her son’s physique and that he was “physically a completely different person.”

After being at home for a couple days, Queeley asked his dad to throw balls to him at a nearby park. Queeley ran drills, focusing on his breaks — when a receiver quickly changes direction at a sharp angle to separate from a defender. Kisha attributed Queeley’s work ethic and motivation to his maturity. 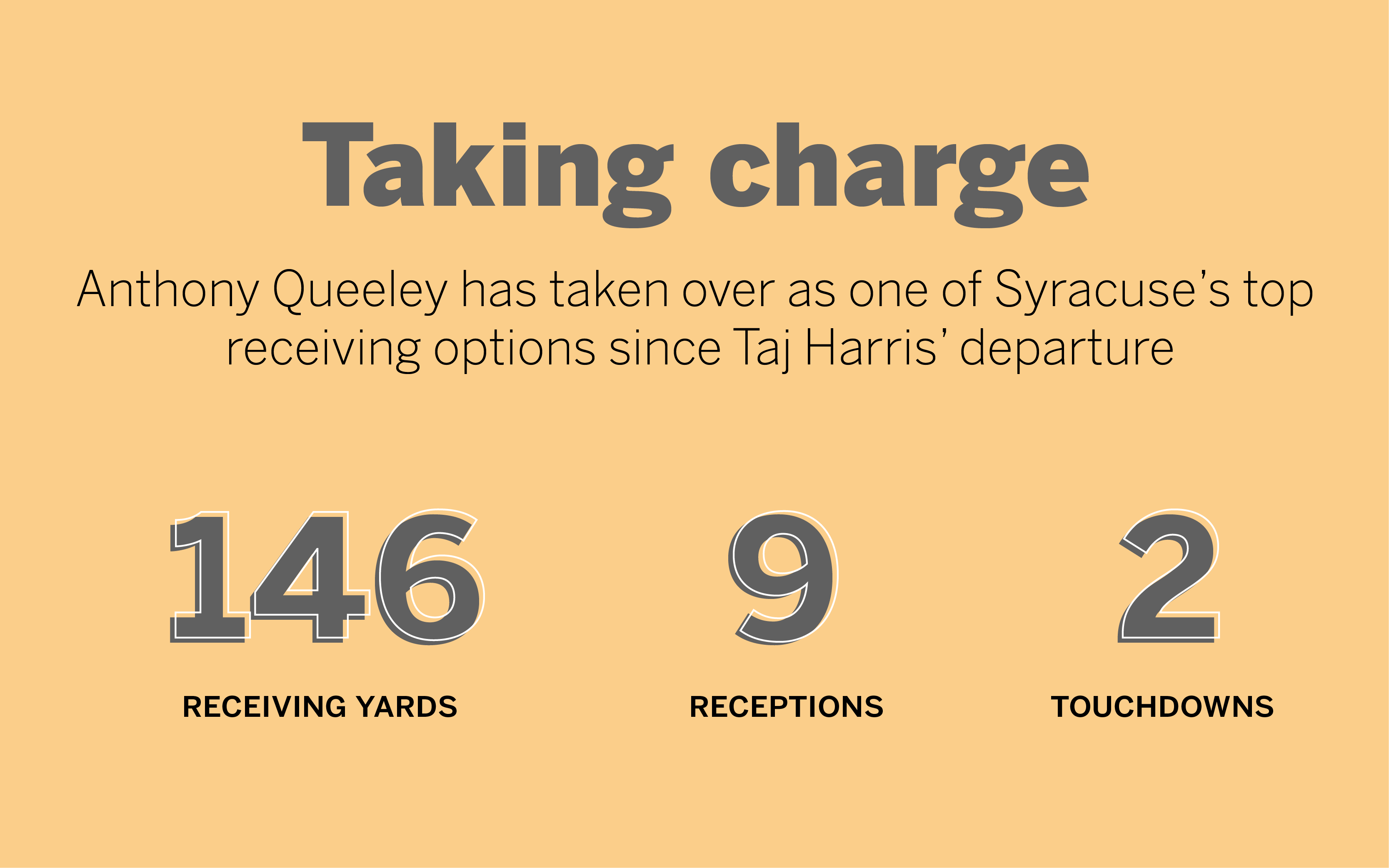 “We’ve always said Anthony is older, way beyond his years,” Kisha said. “He’s always been more of a mature person.”

Queeley’s maturity makes him a different player than Harris. While at Syracuse, Harris flashed his middle finger to a TV camera, pounded his fist into the ground after missing catches and even jogged back to the line of scrimmage ahead of a last-second fourth-down play against NC State. After a costly fumble inside the 10-yard line against Rutgers this year, Harris was visibly emotional, jumping up and down and punching the air while coaches on the sideline told him to calm down. But Queeley’s focus is always on the next play, his mom said.

“Even when things don’t go the way that he or the coaches want them to go, he chops it up and gets his head back in the game,” Kisha said.

After seeing limited field time over nine games in 2019, Queeley became SU’s second-most targeted receiver in 2020. He started 11 games, catching 37 passes for 378 yards and two touchdowns. Queeley and Alford worked on routes in Syracuse’s playbook together the summer after the season. The receivers also worked on crossing routes, staying late after practices to get extra reps in with the quarterbacks. Alford said Queeley made “big steps” during the offseason, and he’s tried to emulate his breaks and receiving techniques as another tall receiver at 6-foot-6.

We’ve always said Anthony is older, way beyond his years. He’s always been more of a mature person.

With his size and strength, Queeley has also become a key blocker for Tucker and Shrader in SU’s run game, cornerback Garrett Williams said. Queeley said Syracuse has tried to add more plays to its offense to become “more dangerous and elusive,” and the Orange are trying to take advantage of Shrader’s strengths as a runner. With more run plays called, Queeley and other receivers are put in position to block out wide.

“He’s a really good blocker, me and him go at it in practice every day and he’s very (tough to) get off of blocks,” Williams said. “He’s a strong guy in the weight room, and you see it on the field as well.”

Beyond blocking, Queeley has shown coaches his ability to be a team player. When he was Lake Nona’s top receiver, Queeley would frequently draw double teams, Paradiso said. But he would just act as a decoy to help get another receiver open. This selfless attitude has always helped Queeley on the teams he’s played on, Paradiso said. It could be the same attitude needed to replace the explosive, veteran receiver in Harris who led Syracuse’s receiving corps for three seasons.

“Anthony can handle any expectation given to him,” Paradiso said.

The post Without Taj Harris, Anthony Queeley could be SU’s top option for WR appeared first on The Daily Orange.