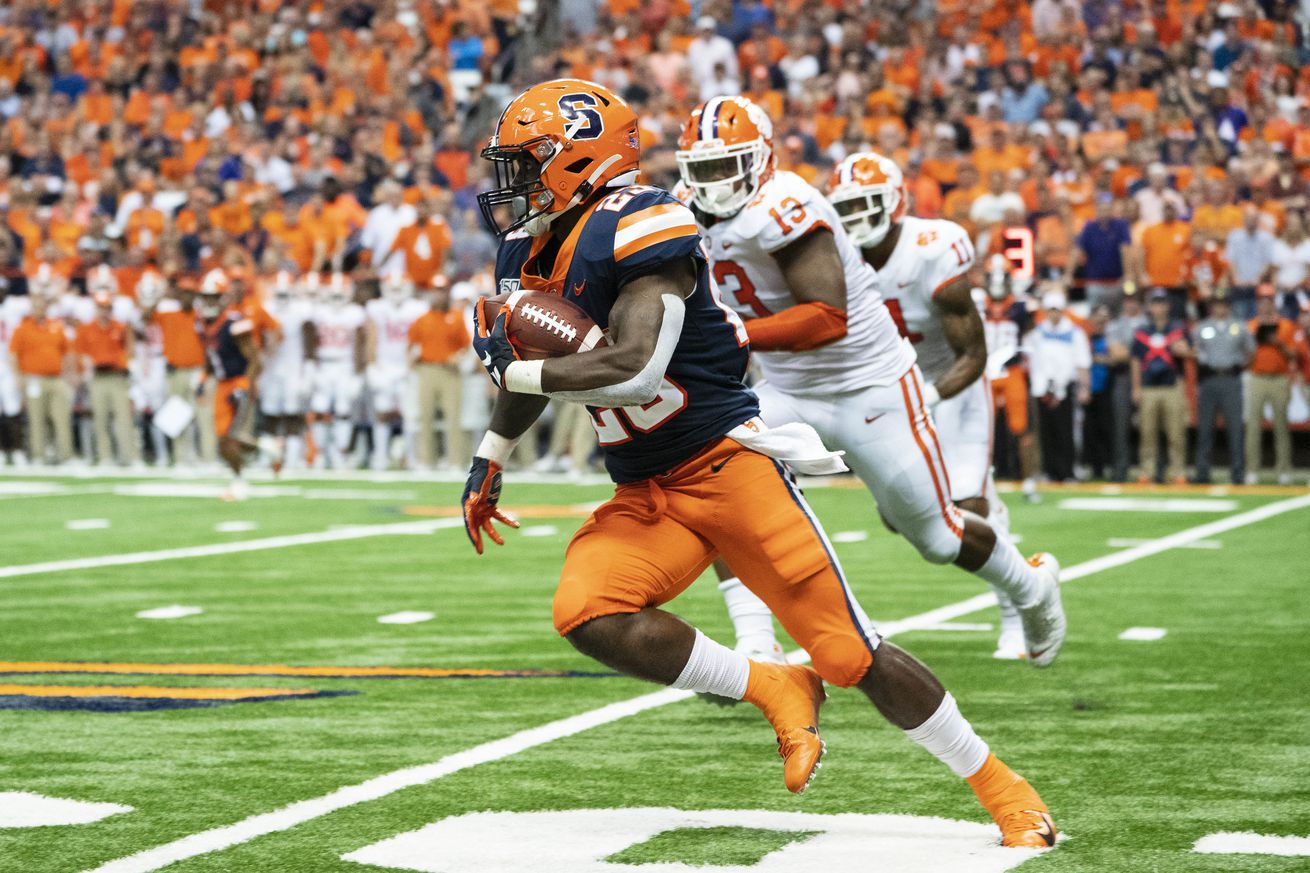 There are three legitimate candidates to be the starting running back at ‘Cuse this year. Which one will pull ahead of the rest?

As the opener against the North Carolina Tar Heels approaches, the Syracuse Orange look to be mostly settled across offense. There’s a returning starting quarterback, cohesion along the offensive line, and while wide receiver is a toss-up, the ‘Cuse offense was always going to have multiple players take snaps due to the pace of the offense.

However, this is Dino Babers’s first season without Moe Neal in the backfield, who was the clear 1A option last year. As Christian pointed out in his rushing preview on Monday, those are huge shoes to fill, and no back was an obvious number 2. So with that in mind, who should the Orange look to be their primary running back when the season opens: Abdul Adams, Jarveon Howard, or Jawhar Jordan.

Jordan will get snaps, just maybe not at running back

Jordan was electric last year in a limited sample size, and is a clear contrast to Adams and Howard in his size and style of running. Not that Howard and Adams are smashing running backs, but Jordan is much more of an outside the hashes threat, and thus, I assume we’ll see him in more double running back sets as that option or in a return of the H-Back. He’ll get touches, but in his first full season, I doubt we see him as a true returning running back.

So who’s the better rusher?

According to Pro Football Focus, Adams and Howard were essentially dead even in the rushing game grades (66.9 vs 65.8). Both were slightly above average rushers, with game by game results that were usually good, but only great one or two times. (Adams vs Liberty and Florida State, Howard vs Boston College and Duke.)

The more interesting look is at their usage in rushing direction; Howard was run up the middle about 10% more than he was outside, while Adams was far more evenly spread out. Specifically, Howard was run middle left on 20 plays; his next closest direction was out wide right 11 times. Adams was run pretty evenly everywhere, which leads to a conclusion the offense was more flexible when running with Adams.

But the passing game is probably the bigger factor

We all knew pass protection was not a strong suit for the Orange last year. The good news for both running backs: they were graded excellently in pass protection, and most eye tests agreed the running backs did well to do what they could against what was constant and overwhelming pressure.

Because of this, screens became an important part of the Orange offense, and the most-used screen was the classic running back slip screen that gave them .729 EPA/play (expected points added), which was the most effective and consistent (In terms of EPA/play) play in the Orange arsenal. With that in mind, the plan may be for Tommy DeVito to have more time to throw, but the running back will more than likely still be a key weapon in the passing game.

Once again, the two players are close, but Howard starts to pull ahead of Adams. Howard was graded out at 72.4, while Adams was at 68.7. Additionally, Adams has had only one season graded above 70, which was his final season at Oklahoma (70.4). Now, Adams was targeted almost double of what Howard was, and neither had more than 20 catches, so this sample size is very small. However, Adams averaged 10.4 YAC (Yards After Catch) on the season to Howard 8.2, another slight edge.

When two players play this close in a season, camp becomes that much more important in determining who starts, and we haven’t seen much of camp this year. If I had to guess, Adams gets the start because of seniority and more flexibility in play calling, but if Sterlin Gilbert wants to get aggressive with the use of Jordan in two back sets or H-Back usage, Howard is much more of your traditional inside RPO guy.

TL;DR – I don’t know, but I think the literal similarities between these two are fascinating and allow the Orange to ride the “hot hand” (as they have in the past), or handle an injury without having to significantly change scheme, a definite plus.