GREENSBORO, N.C. — Virginia’s defenders suffocated Syracuse on the perimeter, cutting off drives before anyone could get to the basket. The Cavaliers gasped every time a Buddy Boeheim (career-high 31 points) shot went up. And on the scoreboard, both teams hung within three points until a late Virginia run extended the Cavaliers lead to six.

Virginia nearly lost that lead when Syracuse turned to the full-court press, with Kadary Richmond tipping a pass and finding Quincy Guerrier for an alley-oop. Two SU free throws tied the game at 69 with 29 seconds left, and Richmond’s intentional foul stopped the clock with 11 seconds.

At the buzzer, freshman Reece Beekman scored his only points of the afternoon. Guerrier rotated down to the low block to cover a Kihei Clark drive, leaving Beekman — a 26.9% 3-point shooter who started the game 0-for-5 — open on the right wing. He caught Clark’s kick out pass, set his feet and released as the buzzer sounded.

Beekman connected on the open jumper. Guerrier wasn’t at fault, but he was heartbroken nonetheless.

As soon as the final horn sounded, as soon as Beekman and his No. 1 Virginia (18-6, 13-4 Atlantic Coast) teammates threw their hands up and ran across the court in celebration, a different game began: the waiting game.

Now, Syracuse will hold its breath for three days until Selection Sunday. After the 72-69 loss in the ACC Tournament quarterfinals, No. 8 seed SU (16-9, 9-7) has until then to think about whether it’s done enough. Think about if the NCAA selection committee will consider the margin of victory in Wednesday’s 89-68 beatdown of NC State. If they care about SU’s track record in March. How they evaluate other bubble teams‘ resumes, such as Xavier’s.

“I think if you watch us play today and you don’t think we’re a tournament team or watched us yesterday — I mean, we’re a good team,” head coach Jim Boeheim said. “There’s no doubt in my mind, and I don’t think anybody’s mind that follows the sport and knows what they’re doing.”

SU remains in ESPN bracketologist Joe Lunardi’s “Last Four In” group following Thursday’s loss. Boeheim lobbied for an at-large bid, pointing to the Orange’s quality wins — though not Quadrant 1 — and the fact that SU had fewer Quadrant 1 chances at home than most teams.

The scene from the ground as Beekman’s 3 wins it for Virginia. pic.twitter.com/0tzie2NnMt

Boeheim’s probably right. SU likely did enough for an NCAA Tournament bid, but nothing’s guaranteed. Several dominoes on the bubble fell — between Xavier, Saint Louis and Drake losing in their conference tournaments — to make room for SU. Louisville fell to Miami, and Duke’s done. Yet, SU’s fate is still up to 10 people on the NCAA selection committee.

“They’re such a talented team, and they’re a dangerous team with their system,” Virginia coach Tony Bennett said of SU. “I hope they get that opportunity.”

Against Bennett’s squad, Syracuse jumped out to an early 20-14 lead as UVA started flat. The Cavaliers rarely turn the ball over — they’re 13th in the nation in turnover rate — but coughed it up three times in the first nine minutes.

Syracuse came out humming, sharing the ball better than it has all season and using off-ball movement in the half court freely and adeptly. SU led by as many as 11 in the first frame.

The Orange also grabbed seemingly every long rebound. On one stagnant possession, with defensive specialist Casey Morsell locking down Richmond, Guerrier ended up with a tough 3 that rimmed out, but the ball landed right in Robert Braswell’s hands, and he drilled a 3. 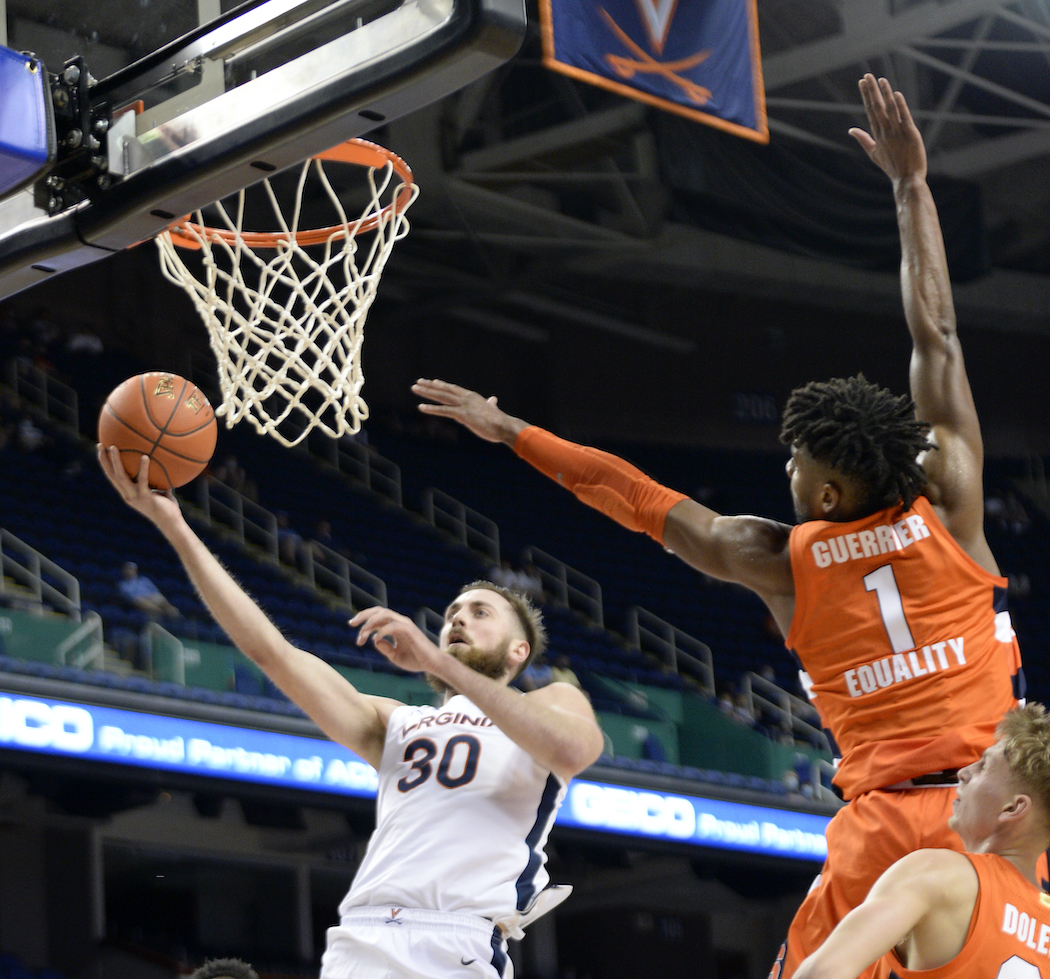 Jay Huff finished with 13 points and 12 rebounds in UVA’s down-to-the-wire win over Syracuse. Courtesy of Sara Davis | The ACC

That combination of luck and shot-making for Syracuse wasn’t sustainable, and it eventually left Buddy on an island as Virginia snapped back to its usual ways in the second half. UVA started 2-for-14 from deep against the Orange zone and regressed back to 31% — still well below its season average.

The Orange’s offense in the second half grew more stagnant and leaned even heavier on Buddy, who’s averaging 25.2 points since the calendar turned, with scorching performances in must-win games against North Carolina, Clemson and NC State — and now UVA.

But Buddy didn’t get enough help against Bennett’s pack-line defense. Girard (four assists, one turnover) played well, but SU needed him to hit more than one of eight shots. The Orange fed Guerrier in the post several times down the stretch to some success, but he missed four of six free throws.

Buddy remained hot, hitting a 3-pointer off a second-chance and then a high-arcing 2 off a down screen. But Virginia’s Trey Murphy III answered with two 3s of his own and gave UVA a 67-61 lead, the biggest for either team in the second half, with 1:55 left.

SU erased that lead with the press and with free throws from Buddy. A questionable non-call for a Virginia five-second violation may have changed the final play, but SU’s comeback wasn’t enough. Beekman made sure of that. Whether SU’s 4-1 start to March was enough to make travel plans for Indiana remains to be seen.

After losing at Georgia Tech 12 days ago, some fans threw their hands up and turned to next year. “A lot of people gave up on them earlier in the year,” Boeheim said after the NC State win. For the majority of this season, Syracuse was a bubble team. At times, they were worse. Even after Thursday’s loss, the Orange team that fell to the Yellow Jackets on Feb. 27 has been left far behind. They’ve evolved, and improved, through wins over UNC, Clemson and NC State — and almost Virginia.

But now, they wait.