After rushing 20 yards for a first down, Tommy DeVito set up Syracuse’s no-huddle offense 41 yards from the end zone.

Head coach Dino Babers had his quarterback run again, but DeVito didn’t pick up any yards. After another incompletion, DeVito looked to the other side of the field as Anthony Queeley ran a comeback route, but he caught it out of bounds. With a fourth-and-10, Babers sent James Williams out to punt, not taking the risk of going for it.

Boos, which had been saved for bad calls by the referees earlier in the game, turned toward the home team as the offense was replaced by the special teams unit.

Along with three turnovers, Babers made multiple coaching mistakes that played a large role in Syracuse’s 17-7 loss against Rutgers. The Carrier Dome crowd disagreed with Babers’ decision not to go for it. DeVito said he had no say on the call. Fans took to Twitter, blasting the choice as one that ultimately led to Syracuse’s demise against Rutgers. But football doesn’t come down to play, or one controversial decision by a head coach. It comes down to a multitude of calls over 60 minutes.

Babers wasn’t risky during the first quarter, but he also switched quarterbacks just as DeVito was getting settled in. And in the third quarter, he received his own penalty for unsportsmanlike conduct, leading Rutgers to break a then-scoreless game.

Babers’ play call midway through the fourth quarter actually made sense, given the down and distance. He said if Syracuse was able to advance the ball even a few yards on the play before, when DeVito couldn’t connect with Queeley, he would’ve kept the offense on the field.

“If not it’s a fourth-and-10, if we had gotten 5 yards, 4 yards, 6 yard on the third down play, I would have definitely gone with it,” Babers said about his decision. “With the fourth-and-10, that’s a tough call.”

Babers said he had faith in his 3-3-5 defense, which held a team that scored 61 points in its previous game to just 17. He trusted the unit to force another three-and-out like they had six times before on Saturday. He also had three timeouts, which he could’ve saved for Syracuse’s next offensive possession.

But that possession came too late. SU’s defense — without Garrett Williams due to an unknown injury suffered earlier in the half — folded.

On Syracuse’s second drive of the game, Babers’ tempo offense strung together nine plays. The Orange landed on the 14-yard line and facing a third-and-8, Babers called a timeout.

Taking time to think over how to approach the ensuing play, Babers and his staff settled on a screen pass to receiver Taj Harris. Harris caught the ball and made a nice move to avoid one defender but was met with a barrage of more Scarlet Knights in the middle of the field, forcing Harris to fumble the ball.

While Harris’ fumble can’t be blamed on Babers, the play call itself should’ve been more aggressive. A screen route leaves Harris subject to huge hits from the defense, especially if some blocks are missed by the offense. Harris was flustered after juking out one defender that was unblocked, and the ball popped out against three more. Fourteen yards from a touchdown, Babers could’ve drawn up a better play for Harris, one where he would’ve caught the ball in the end zone.

Instead, the Orange didn’t score for the whole half, and DeVito didn’t play in the second quarter. Babers said he decided “before the game” that DeVito wouldn’t play the entirety of the matchup against Rutgers, wanting to give Mississippi State transfer Garrett Shrader a chance at quarterback. This was most likely because Shrader only got a drive in garbage time last week against Ohio, after Babers had hinted he would get more playing time.

Despite going 7-for-10 with 57 passing yards, DeVito was pulled after the first quarter for Shrader, who provides more of a presence in the running game.

On his next drive, Shrader showed promise, heaving a perfect ball to Harris on first down. But safety Christian Izien made a better play, batting the ball down. He passed three more times on the drive, hitting twice and missing once.

But on his last play of the drive, which ended up being his final of the game, Shrader fumbled the ball trying to avoid the rush. The ball rolled out of bounds, setting up SU for a long field goal attempt, which Andre Szmyt missed. 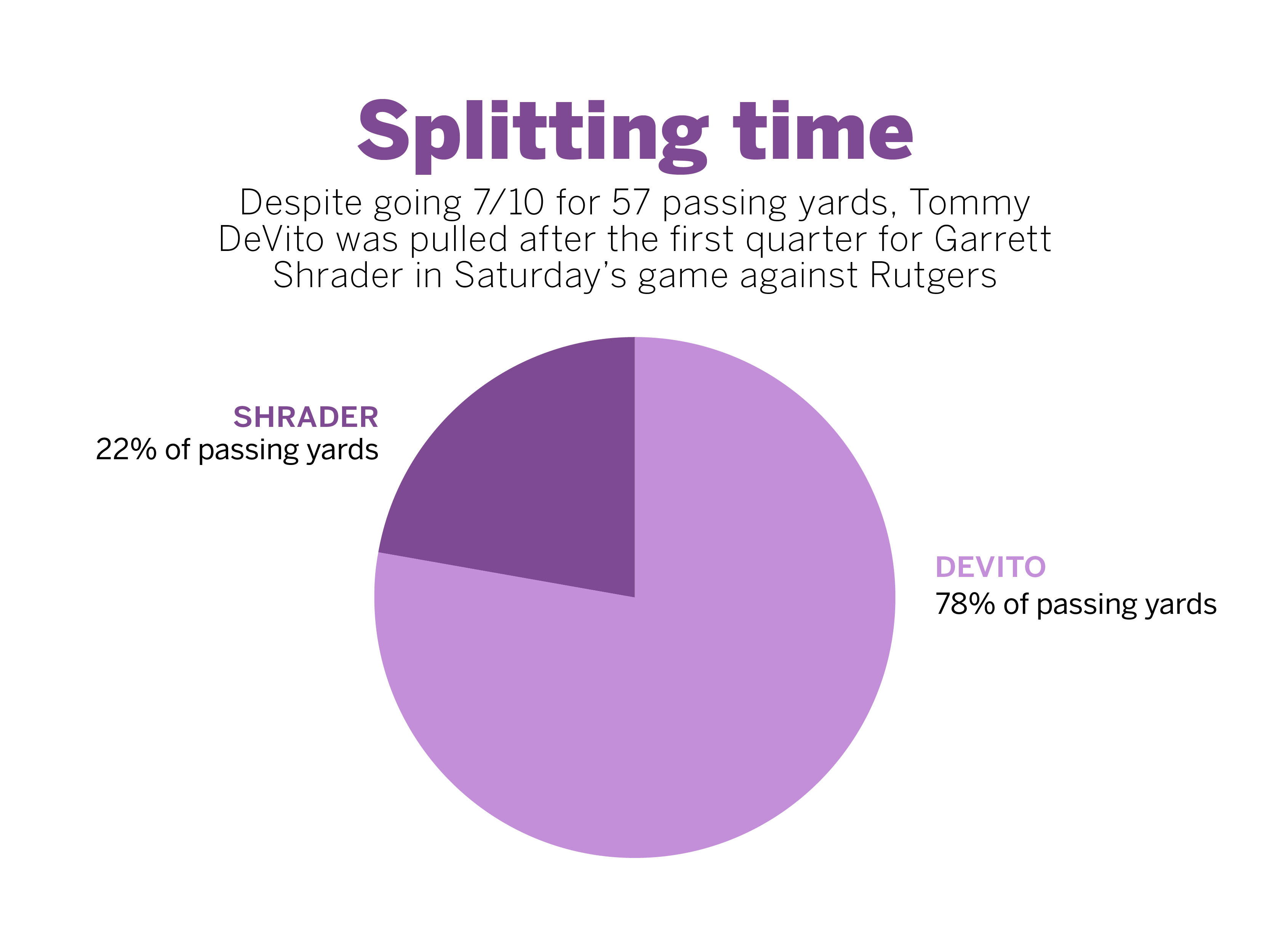 In the second half DeVito returned, but he was cold after not playing for almost 30 minutes. His first two passes landed incomplete, and Rutgers figured out how to fluster him, he said. The Scarlet Knights began to blitz safeties, and the offensive line couldn’t keep up, leading to DeVito struggling in the third quarter.

“Early on they weren’t bringing as much, but as the game went on and we started to pass the ball more, they started putting more pressure on me,” DeVito said.

Babers shouldn’t have taken DeVito out of the game. Against Ohio, DeVito and Syracuse’s offense had the same start — a slow one. The Orange scored on their first drive of the game but didn’t find the end zone again in the first half. DeVito just needed time to settle in and later led two drives that ended with touchdowns in the second half. Syracuse won 29-9.

At the end of the third quarter against the Scarlet Knights, Syracuse linebacker Mikel Jones was called for a personal foul in the red zone — Babers and the fans did not agree with the call.

The flag offset with a holding penalty on Rutgers offensive line, but Babers confronted the referees. He entered the white lines and used language deemed “too strong,” receiving his own flag for unsportsmanlike conduct. Babers said it was the first flag of that nature he’s ever received in his time as a head coach, assistant or player.

As Babers walked off the field, Rutgers advanced to the 11-yard line with a new set of downs. On the ensuing play, Kyle Monangai waltzed into the end zone for the first score of the game.

The mixture of sloppy coaching and sloppy play proved disastrous for SU. Babers said the Orange aren’t going to play like they did last year, but it starts with him if they want a winning formula.

Anish Vasudevan is an assistant sports editor at The Daily Orange, where his column appears occasionally. He can be reached at asvasude@syr.edu or on Twitter @anish_vasu.

The post Vasudevan: Babers’ coaching mistakes in Rutgers game set SU up for disaster appeared first on The Daily Orange.