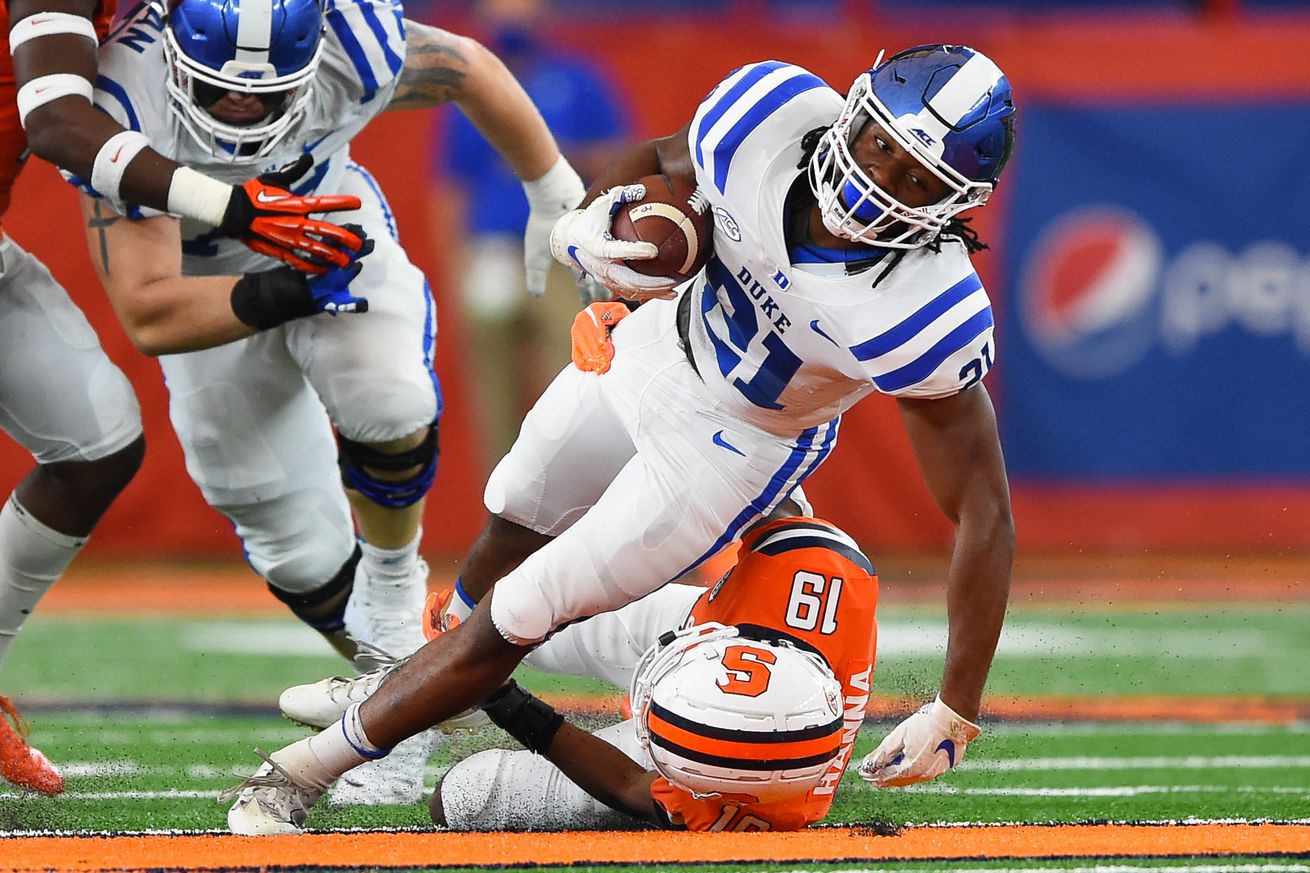 Not great Bob. Not great.

The Syracuse Orange didn’t look great in any facet of the game today in their loss to the Duke Blue Devils. Giving up 645 yards of total offense, while only being able to muster 286 yards on their own, only 28 of them on the ground, isn’t the greatest look. After what looked to be an improved week last week, the Orange also gave up six sacks for 44 yards. There will be a lot of work to do this week.

Through the game, there were points where a Duke player was wrapped and ended up getting more than a few second effort yards. There were some times where Jackson and Durant dragged a defender or where the group had the rusher stopped and let him loose prior to forward progress called. You also had Duke’s third touchdown, where Geoff Cantin-Arku didn’t attempt to wrap at all and knocked the receiver past the pursuing Cam Jonas and Rob Hanna.

Tackling throughout the game was an issue, with the Orange repeatedly getting a hand or shoulder on a runner or receiver, and they would shuck them. It wasn’t isolated to a player or two, but rather seemed that the whole unit was going for the big play instead of the smart play. That may be predicated on the youth and inexperience, but they need to shore that up.

A few times the offense was left with receivers not finishing routes, or the line not finishing blocks off, but most impactful were the drops from the wideouts. Tommy DeVito seemed to do everything he could for the Orange on the day, putting the ball on a dime in numerous spots, but at least five drops in wide open space on catchable balls puts the offense in a rough spot and keeps the defense on the field by not extending drives. This has been something the Orange have had issues with all year.

It was apparent early and often that the Orange were giving up some yards on the ground. Duke ran for 247 yards on the ground in the first half and most of it was right up the middle. Unfortunately this showed a bit of an issue with Tony White’s initial game plan, only bringing minimal pressure and keeping around five in the box to defend the run. Deon Jackson and Mateo Durant really cut up the center of the Syracuse defense. They did make some adjustments and hold the Blue Devils to just over 100 yards in the second half, however it needs to be better than that.

While some of the depth issues don’t help the ability to read and react to the run, overall it’s a scheme issue that needs to be addressed. Both Georgia Tech and Duke have exploited the central running lanes, which is worrying. The injuries on both sides of the ball are piling up and not helping anyone in Orange.

The offense is boom or bust.

Through most of the game it was a bust. There were at least two booms. The first, the homerun play to Taj Harris for that 79-yard score on one of the best throws I’ve seen DeVito throw. The second, the misdirection tight end shovel to Luke Benson for his 53-yard touchdown. Other than that, the first three quarters were crash courses in poor offensive performance. Whether it was odd playcalls, the aforementioned drops or just breakdowns, the offense couldn’t get out of it’s own way.

The designed deep balls were a nice touch and most of the time the wideouts were open, with DeVito putting the ball where he needed to. They also found some rhythm in the fourth quarter, working some short passes, getting the ball in their athletes hands and moving the chains. It’s a game plan to take forward to the next few weeks, though it was a bit too little, too late. DeVito went down in the middle of the drive with a lower body injury and Rex Culpepper couldn’t muster the offense to bring the Orange back from the whole they dug for themselves.