After Syracuse’s loss to Rutgers, quarterback Tommy DeVito said the offense wasn’t as balanced as it should’ve been. The rushing game fell flat, and that didn’t allow SU to use play-action to open up the passing game.

“When you run the ball, they start stacking the box and that’s when you throw the ball well. We didn’t do good at either of those things,” DeVito said.

Four games later and with Garrett Shrader as quarterback instead, Syracuse put up its biggest offensive game against then-No. 19 Wake Forest. The Orange have spent the four weeks prior to the Florida State game improving that balance, and in the game against FSU, they showed significant strides. After the Wake Forest game, despite an overtime loss, running back Sean Tucker described the variety of run and pass play-calls as “finally there.”

Syracuse still has an extremely run-heavy offense. SU has turned to the read-option featuring Tucker’s ground-and-pound style mixed with the elusiveness and speed of Shrader. The Orange threw the ball 27 times, the second-most times all season, and ran it a season-high 58 times against the Demon Deacons. Head coach Babers said except for a few missed deep balls, he was satisfied with the offense and its balance.

For SU, a run-heavy offense is the perfect balance. It’s tailored to its biggest strengths — Shrader’s and Tucker’s legs. The defense didn’t know who would get the ball, Tucker explained, and the opposing team’s offense tried to key on one player but couldn’t (both ran for over 150 yards). After the game, when asked if Syracuse can solely ride on Shrader and Tucker through its remaining schedule of Atlantic Coast Conference games, Tucker said, “until they tell us not to, we’ll keep doing what we’re doing.”

Earlier in the year, before Shrader emerged as the playmaker SU now knows he can be, the balance was inconsistent. Syracuse rushed the ball twice as many times as it threw against Ohio, and then had a near-50/50 balance the following week against Rutgers. SU rushed the ball three times more than it threw against Liberty. And it never eclipsed 400 yards of offense, not counting UAlbany.

Last Saturday against the Seminoles, Babers said the Orange were improving. SU was “closer to what it needs to be,” he explained, but he wanted to see Shrader and the offense take a couple more shots in the throwing game. In the second half, SU largely relied on the read-option from its duo of Shrader and Tucker — the same strategy that it leaned on this week against Wake Forest.

“You saw in the second half how the game looked different, maybe a little bit different than it’s looked in a while, and I think we need to continue to grow on that,” Babers said after the Florida State loss.

Shrader completed five passes of more than 20 yards after having just one such pass prior to the Wake Forest game. He unloaded an accurate pass to a wide-open Anthony Queeley for a touchdown and aired another out to Courtney Jackson for a 24-yard completion. 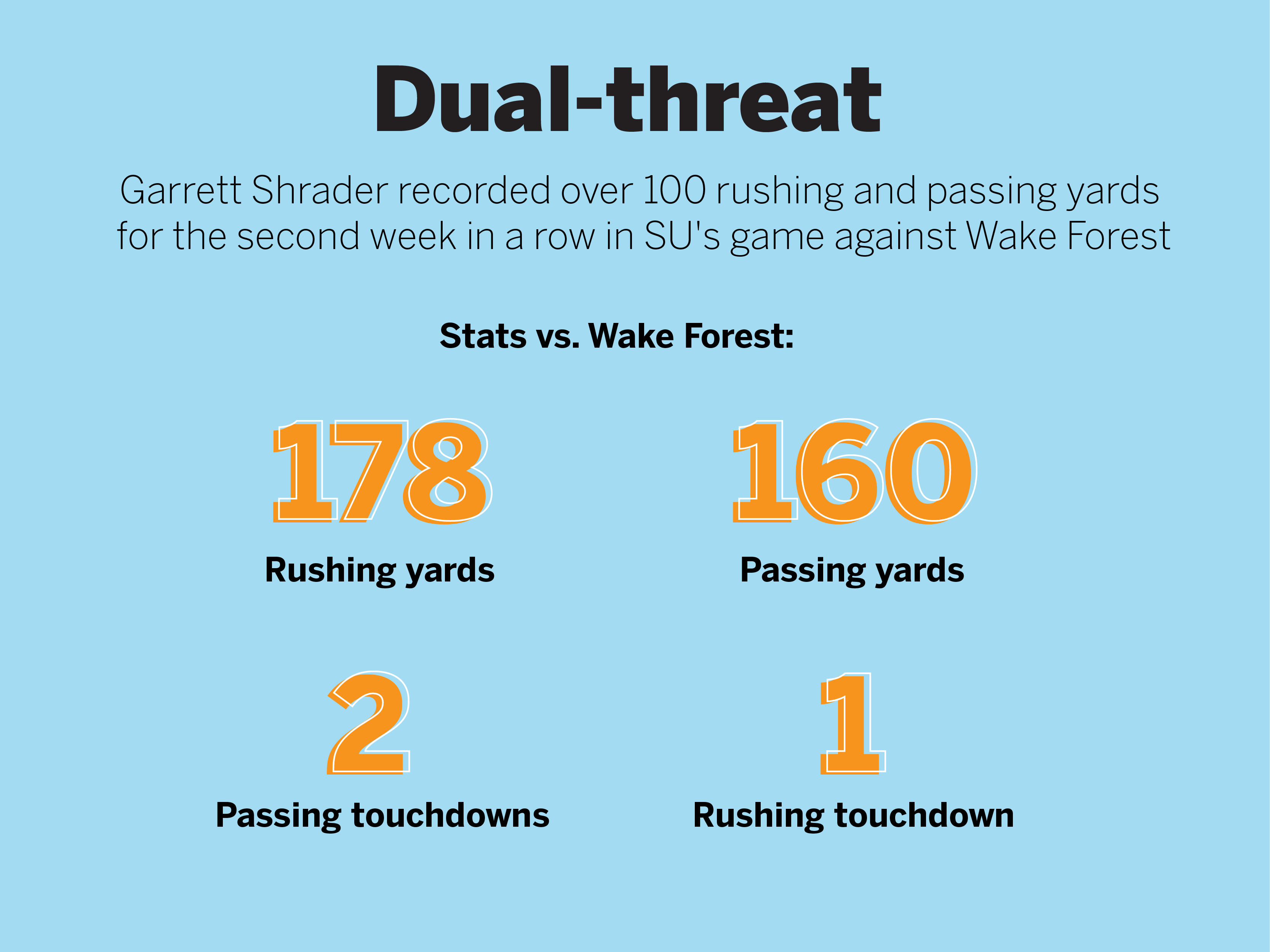 Jackson said after the game when the run game gets going, the defense has to respect that, which opens up opportunities for wide receivers. Many of Syracuse’s successful completions — like the Queeley touchdown — came on play-action calls, where Shrader faked the handoff to Tucker first.

The fakes go the other way, too. Shrader faked a jet sweep to Jackson and kept it up the gut for a gain of nine in the first quarter. Babers said those designed jet sweeps force the defense to guard the full width of the field, which helps open up gaps inside for receivers. On numerous occasions, Shrader rolled out of the pocket and looked for an open receiver, but took off running when he couldn’t find one.

“I want to throw the ball every play naturally as a quarterback,” Shrader said after the game. “We have to get better in the pass game — there’s a lot of more opportunities for pass yards.”

The game was won when…

Eventually, in overtime, Shrader and Tucker ran out of juice. SU’s offense moved 10 yards upfield on its possession via a four-yard rush from Shrader and an eight-yard one from Tucker to move the chains, but Shrader took a costly sack on 3rd-and-8 that forced SU to send out its kicker. When Wake Forest got the ball, it took two plays — a three-yard rush up the gut and a 22-yard strike to the left corner of the endzone — to score a touchdown.

A.T. Perry made an adjustment on the ball that quarterback Sam Hartman unleashed, extending his arms forward as he fell backward to secure the catch and land in bounds. The coverage from Duce Chestnut was solid, but the catch that Perry made was better. Babers said his view was blocked and he couldn’t see the game-winning play in real-time, but he assumed the ball hit the ground.

Quote of the night: Dino Babers

Syracuse was trying to win the game on a two-point conversion at the end of regulation. Instead, Babers could only shake his head in frustration and accept a delay of game penalty since the Orange had burned all three of their timeouts. SU was forced to send on Andre Szmyt for the extra point.

“There wasn’t a sense of urgency of us going out on the football field,” Babers said. “There (were) certain cats that were taking their time and we needed to speed that thing up, and it was disappointing. I didn’t want it to go to overtime.” 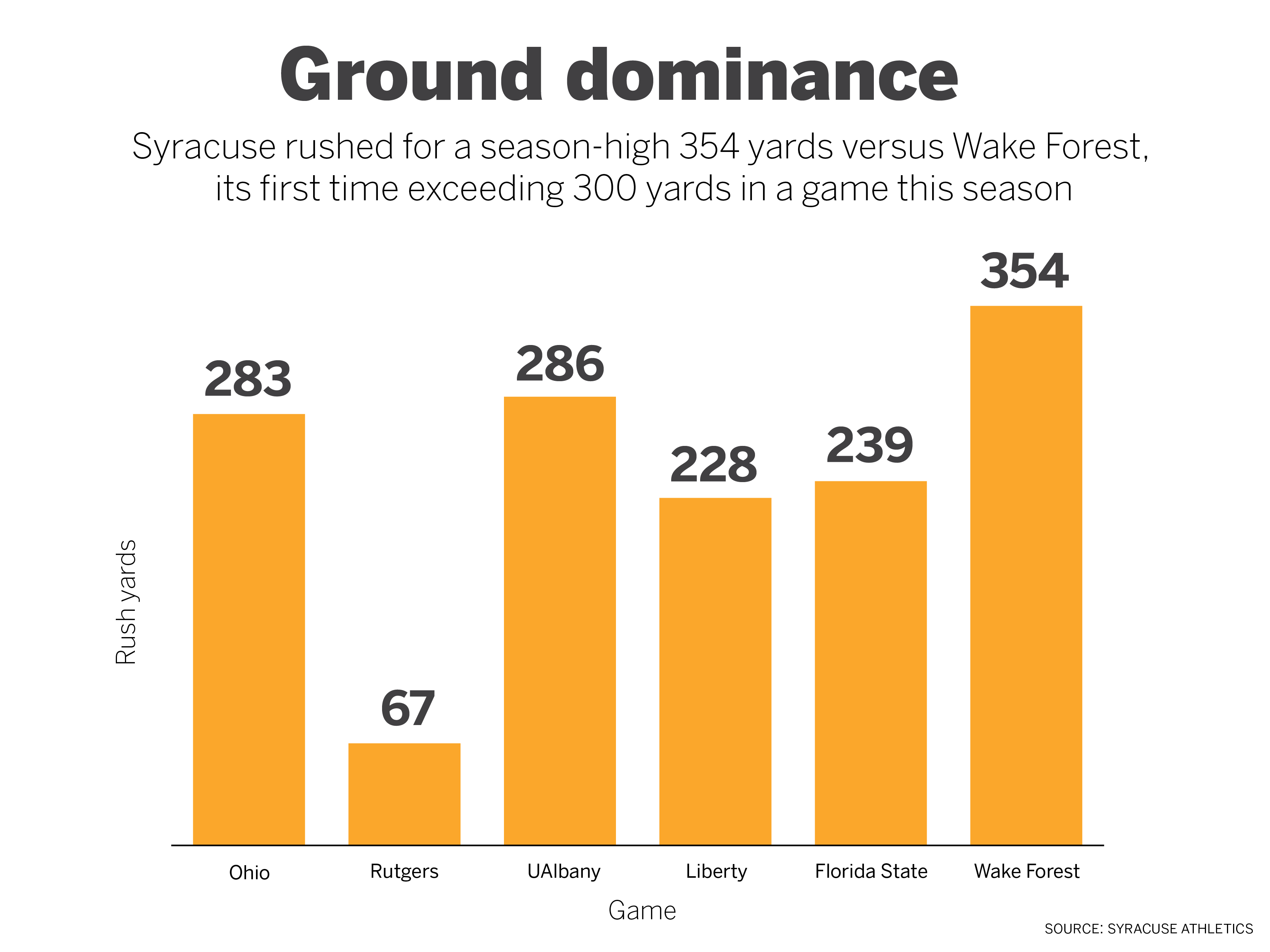 Syracuse averaged 6.1 yards per carry against Wake Forest, one reason why fans were frustrated with Babers’ decision to send out Szmyt midway through the fourth quarter to attempt a 45-yard field goal — which he missed — instead of going for it on fourth and short. Szmyt doesn’t have the same consistency he had during his Lou Groza award-winning freshman season, though he did break SU’s all-time record and notch his first game-winner this year. But the kicker didn’t seem to have the leg for that moment, hooking the effort wide-left, and it all seemed to be in vain. Fans can only speculate about what could’ve been, as Syracuse would’ve had a realistic shot at converting the chance had it kept its offense on the field.

The read-option duo has become the bread and butter of this Syracuse offense. Shrader’s 178 rushing yards and a touchdown, paired with his two passing touchdowns and 160 yards, all but solidified that he’s deserving of the starting job for the rest of this season. He became the third Syracuse quarterback since 1979 — alongside Eric Dungey and Bill Hurley — to notch back-to-back 100-yard rushing games. He’d reached that mark by the end of the first half, too. Babers was reluctant to make comparisons to Dungey, but he said Shrader has been playing really well.

Tucker’s fourth straight 100-yard rushing game tied the second-longest streak in program history. He also slipped out of the backfield and created the game-tying touchdown that sent the game into overtime. Anyone else would have been a surprise, but for Tucker, it was normal.

One costly penalty: Syracuse was only penalized three times for 30 yards against No. 19 Wake Forest, a drastic improvement from the program-record 16 penalties it recorded against UAlbany three weeks ago. But the Orange were lucky not to pay for a costly holding penalty during the second quarter.

SU had just scored, stretching its lead to double-digits and opened the defensive series by putting immediate pressure on Hartman by flushing him out of the pocket. Linebacker Marlowe Wax stripped the quarterback and Terry Lockett fell on the loose ball, but a penalty in the secondary for holding negated the turnover. The series ended soon after because Hartman threw an ill-advised deep ball into triple coverage that was picked off, and SU’s defense closed out the series with a takeaway after all. But the hold could’ve been far more detrimental.

“They caught us for a hold on one of our DBs, which would’ve been an enormous play in the game, and we didn’t get that play, so it’s the price of poker if you’re going to do the things we do in terms of pressuring blitzes and the guys in the back end have to play man-to-man,” Babers said. 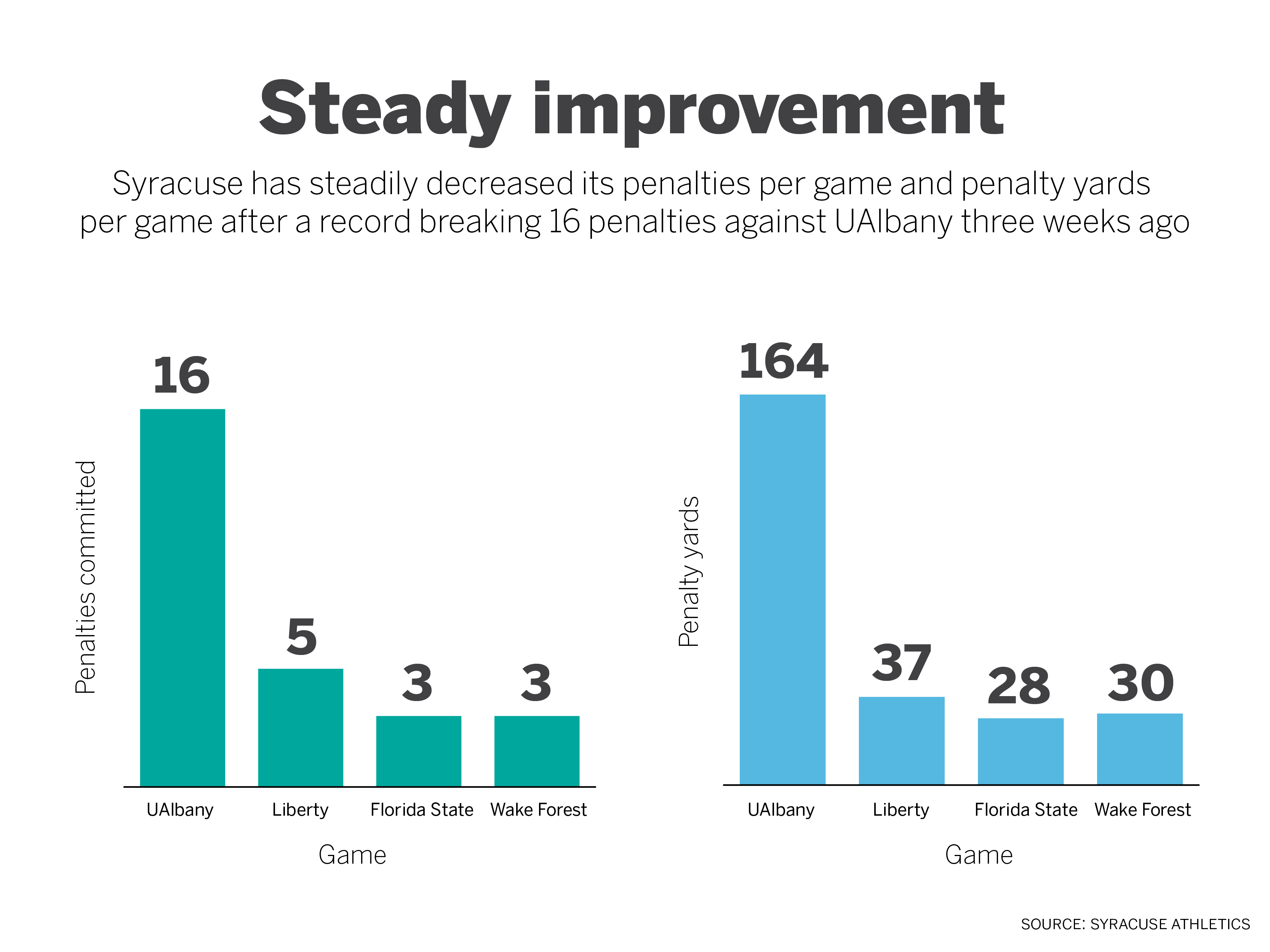 Jason Simmons — and the secondary’s — errors: Free safety Ben Labrosse used to sit atop the depth chart, but since his departure from the program one game into the season, Jason Simmons has taken over that spot. Saturday, Simmons was burned over the top on Wake Forest’s opening possession for a 42-yard gain by Jaquarii Roberson and was beaten again by a double-move on a 46-yard pass to Perry at the start of the second quarter.

Simmons atoned for his errors with an interception later in the quarter, though it came more as a result of a poor quarterbacking decision than an impressive defensive play or read. The middle of the field was particularly vulnerable for the Orange throughout the day. Later, in the third quarter when Syracuse was leading by one point, Garrett Williams — a very consistent and reliable corner — misread a coverage and was beaten on the deep route by Perry. The wide receiver deceived Williams on the route and then juked him out after catching the ball to score the 69-yard touchdown. Williams played well for the rest of the afternoon, but in a close game, that big play shifted the momentum.

Blame the defense, not Babers, for the 3rd-and-23 fiasco: Babers’ decision to accept a holding penalty and take a 3rd-and-23 instead of a 4th-and-13 has become controversial. The Demon Deacons used a 25-yard completion to move the sticks, and they went on to score a touchdown. The argument some Orange fans have made: Why allow seven when you could’ve taken three?

But that’s in hindsight. Babers explained that his decision to accept the penalty was because he watched Wake Forest’s kicker make from as far as 58 yards during pregame warmups. Nick Sciba has never converted from more than 50 yards during a game, but Babers said he was sure “this guy wasn’t going to miss.” So, he elected to send his defense out to get a stop. Considering the secondary that SU has, and the faith that Babers has shown in it, fans should be more disappointed in the defense for conceding a 25-yard completion in the middle of the field when they just needed to guard the sticks.

With one less day to prepare, the Orange will now get ready to host an unranked Clemson team that’s coming off its bye week. The Tigers’ 107-week streak in the AP Top 25 poll came to an end last weekend when Clemson’s 19-13 win over Boston College didn’t impress voters enough. So for the first time, an unranked Clemson team will play Syracuse. The Tigers will still be the team with more raw talent, but SU proved that it really does have a football team — as Babers emphasized postgame — that’s much improved from last year.

The post The next day: SU finally found a balanced run- and pass-offense. It’s just not 50/50. appeared first on The Daily Orange.