CHAPEL HILL, N.C. — Down three goals with just a quarter of the Atlantic Coast Conference championship game remaining, Syracuse desperately needed to regain momentum. The Orange lined up for the draw control, in need of its first draw win in the second half. As the ball flew up into the air and bounced along the right side, Ella Simkins scrambled to collect it and scanned for a pass.

With UNC keyed on Simkins, Sierra Cockerille made a run in behind the Tar Heels’ backline. Simkins spotted her teammate and lobbed a long 20-yard skip pass to a wide-open Cockerille. The midfielder gathered the ball with no defender within five yards of her, and wound up for a shot that should’ve been destined for the back of the net. Instead, it flew harmlessly over the top.

Sunday afternoon, No. 2-seed Syracuse (14-3, 8-2 ACC) fell 9-4 to No. 1-seed North Carolina (18-0, 9-0) in the ACC Tournament final. The defense and Asa Goldstock held the Tar Heels to a season-low nine goals, but SU’s offense managed just nine shots on goal as the unit sputtered out. Missed chances and offensive turnovers prevented Syracuse from overcoming the gap between itself and ACC powerhouse UNC, which sealed its inevitable fifth-straight ACC championship.

“They are the best team in the country right now, and we’re gonna have to play a much better game to try and put it all together if we want another shot at them,” Gait said.

This ACC Tournament, SU relied on its defense against Virginia Tech and the offense against Boston College. After both wins, Gait stressed how critical it would be to put together a full 60 minutes on both sides of the ball against North Carolina.

Yet Sunday, Syracuse couldn’t do that. The defense showed up in the first half, holding a red-hot Tar Heels offense at bay. But the offense could not create enough scoring opportunities as they turned the ball over 16 times, the second-most all season.

“You go from scoring 19 goals against a very good BC team, to scoring four,” Gait said. “They’re just young, and they haven’t been put in this position before. We’ve always had other players in those roles.” 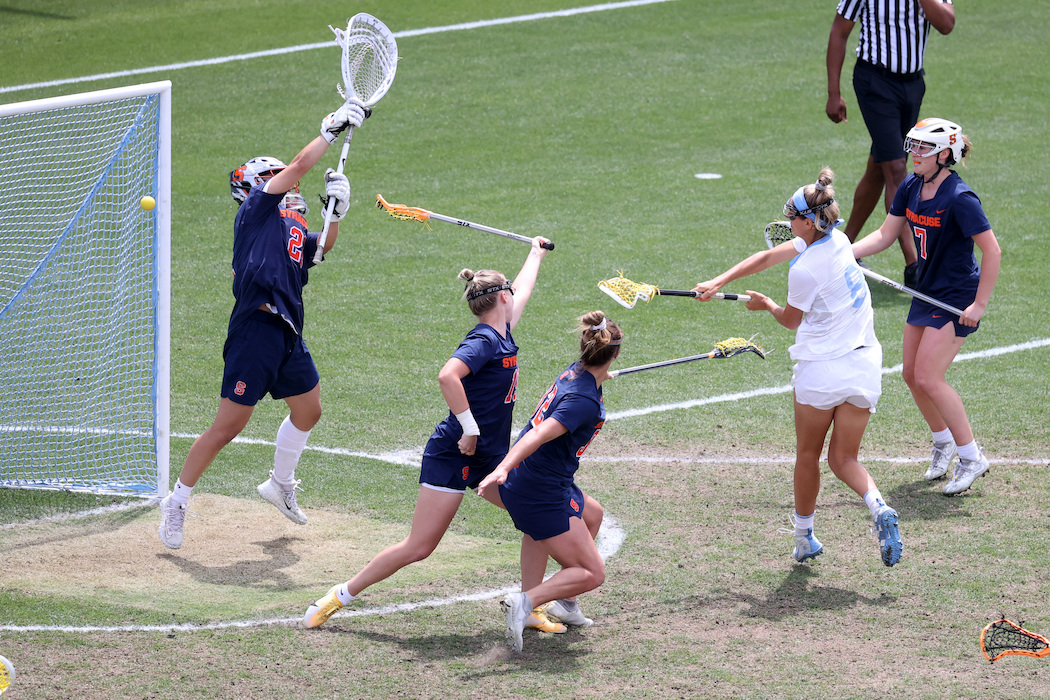 Syracuse’s defense held UNC to a season-low nine goals. Courtesy of the ACC

The young players on Syracuse’s offense appeared to start the game well. After finding a plethora of space in the middle against Boston College on Friday, freshman Emma Ward flipped the ball to Emily Ehle to start Sunday’s game. Ehle took one step and gave SU a 1-0 lead just five minutes into the game.

Then the offense went cold. SU turned to its motion setup, and Ward rolled in and flipped the ball to Sam Swart. Swart continued past Ward and fired the ball into the net, but referees whistled the play dead after an offensive foul on Ward.

Minutes later, Meaghan Tyrrell tried to get the offense going as she curled into the area, drawing a free position play after taking a hard check. Tyrrell crouched down and readied for the shot but chose to pass instead as the whistle blew. Ehle made a backdoor cut and quickly grabbed Meaghan’s pass, dishing to a wide-open Emma Tyrrell in front of goal. The sophomore midfielder was fouled, and then got fouled once more, much to the chagrin of the UNC fans. On the third attempt, she drove to the net and could only ring a shot off the crossbar as three defenders closed her down.

Later, Ward isolated herself against a defender as she started behind the net. She drove by the UNC player but got called for a charge. The freshman could only drop the ball to the ground next to the fallen defender and trudged back on defense.

Ward scored later on the man-up in the final minute of the first half, but in total the Syracuse offense recorded just four shots on goal in the opening half.

Still, Syracuse trailed by just two at halftime, a position where the Orange secured comeback wins over Notre Dame and Virginia earlier this season. But Sunday, to open the second half, Jamie Ortega made it 5-2. Meaghan skied a free position chance immediately after, and then picked out Emma streaking across the crease after SU regathered possession.

But when the sophomore midfielder wound up to shoot, Emily Nalls stick-checked the ball and it rolled harmlessly to a UNC defender. Emma scored a few minutes later, when Ward found her cutting and the sophomore threw a highlight, backhanded shot past UNC’s goalie. But as the second half continued, the Orange offense still could not find any momentum. SU finished with scoring droughts of 24 minutes, 10 minutes and 15 minutes.

Ward rifled home a low free-position shot midway through the second half, but that would be SU’s final goal as the freshman had a hand in all four Syracuse goals, scoring two and assisting two.

“We’re down a couple players, and we’re counting on a true freshman to step up against the best team in the country and try and score a bunch of goals,” Gait said. “That’s a tough ask for a young lady like that. (Ward) played great this whole tournament, and we’re gonna need her to continue to play well.” 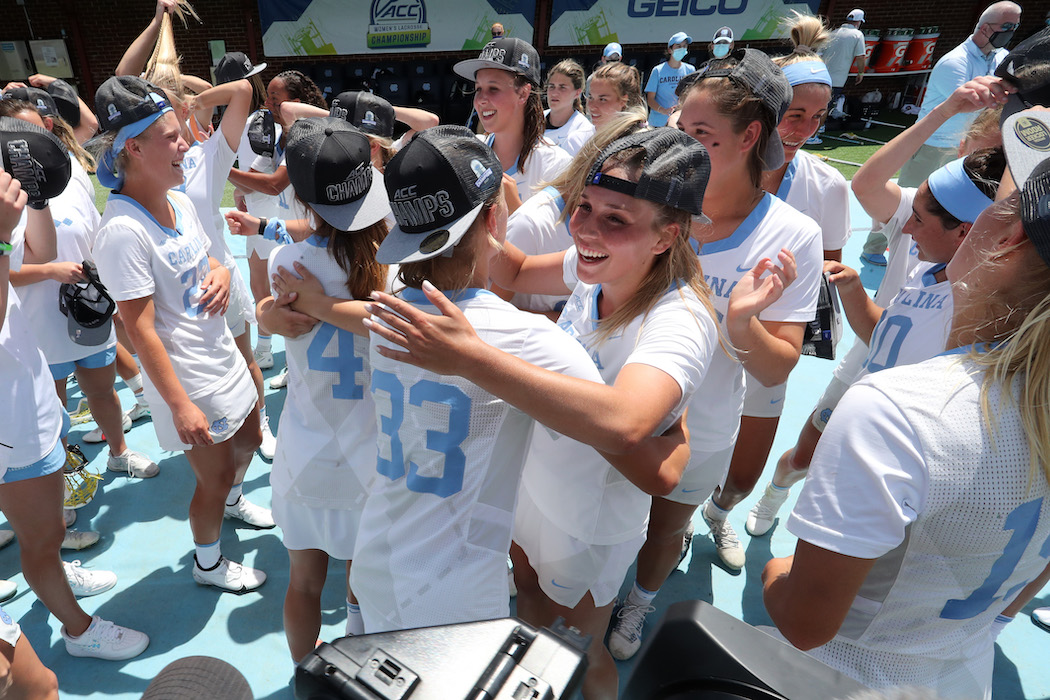 The Tar Heels won their fifth-straight ACC championship on Sunday at home. Courtesy of the ACC

Ward’s inexperience showed with her three turnovers, tied for the team-high with Emma, both of whom are playing their first full season with the Orange. UNC held Syracuse’s top point scorer, Meaghan without a point, focusing its defensive attention on her because on the sidelines stood Syracuse top-two goal scorers, Emily Hawryschuk and Megan Carney.

The final horn marked another ACC Championship win for UNC’s top two all-time scoring leaders, Hoeg and Ortega. The pair contributed over half of the Tar Heels goals in the victory and cemented UNC as national title favorites.

Postgame, Gait likened the ACC Tournament to what the Orange should expect come the NCAA Tournament. Syracuse will likely have to go through North Carolina — once again — to have a shot of winning its first national title. And without Hawryschuk and Carney, this iteration of the Orange will need to figure out a solution.

“We didn’t get it done on the offensive end, I think we had enough opportunities,” Gait said. “We were just not efficient on our shots, and not putting the ball in the back of the net. We played with a lack of confidence.”