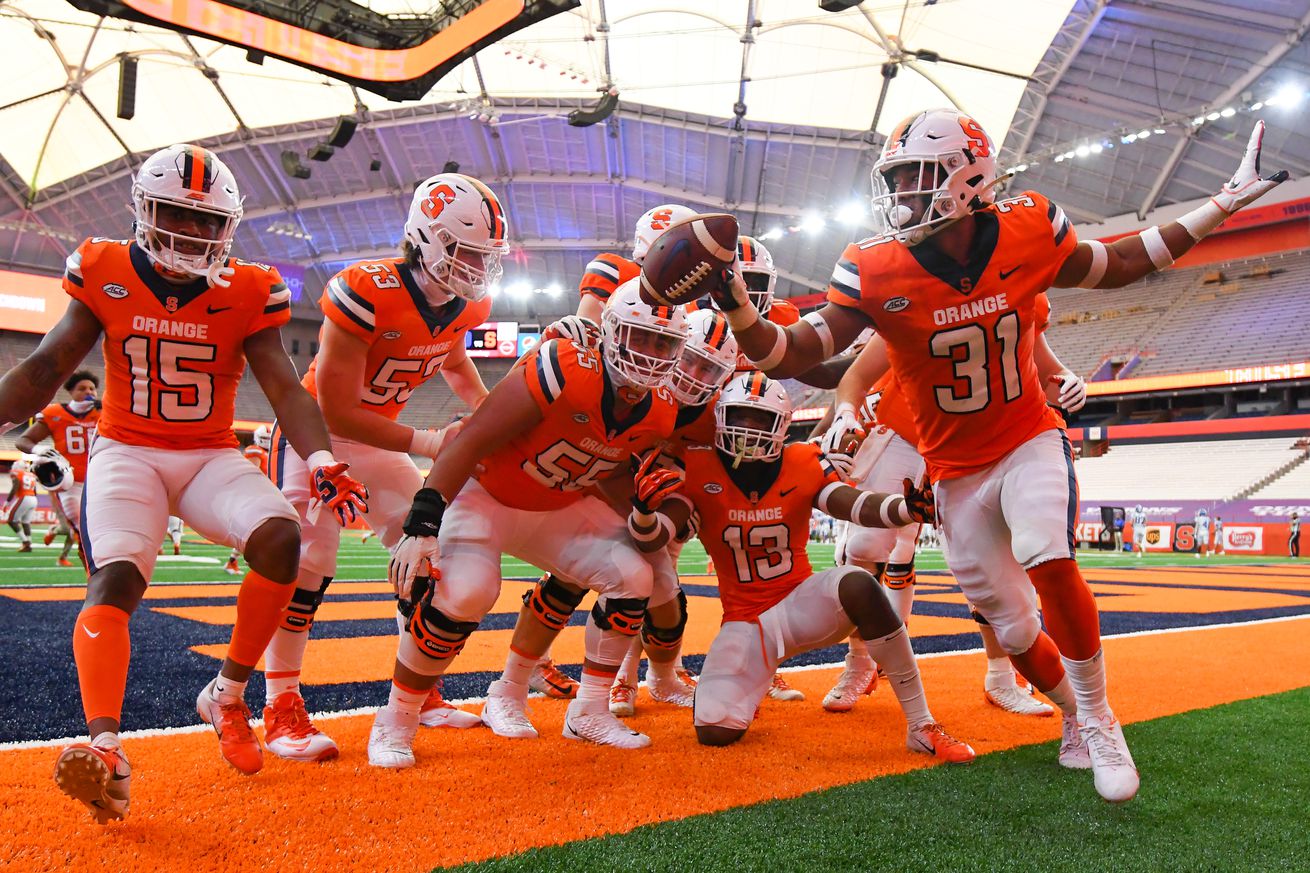 Let’s get one thing straight before we start — I love how the 3-3-5 defense has performed this season. I think most fans will agree with me in saying that the defense can be set up for consistent success for a while in Syracuse.

That being said, there’s been some holes that have been exposed in the Syracuse Orange defense, in particular the run defense. Normally that would mean that too many holes are being exposed in the 3-3-5 allowing for big runs. However, I think there’s a bigger problem at stake.

Take a look at the table below. Listed here are Syracuse’s Pro Football Focus grades in run defense and tackling as well as the rushing yards allowed and the missed tackles for the Orange in 2020.

Keep in mind that the PFF baseline grade is a 60. Based on the grades above, it would seem to suggest that Syracuse defenders are getting in the right spots to stop the run. The clear issue comes in the tackling department, which became noticeably clear in the Duke game.

Take a look again at the stats recorded in the Pitt game. You could easily say that was the best defensive game of the year and the reason Syracuse lost that game was largely because of offensive inefficiency. Not only did the Orange receive high defensive grades, they missed the least amount of tackles and allowed the fewest rushing yards to the Panthers out of the SU opponents this year.

The tackling, however, seems to be the biggest issue. We saw multiple times two clear scenarios against the Blue Devils. The Duke running backs routinely broke through tackles and gained extra yards after contact. Syracuse defenders also put in lazy arm and shoulder tackles that didn’t bring Duke ball carriers to the ground, leading to extra yards as well.

So why is this the case? Well listen to how every defender talks about Tony White’s 3-3-5. In almost every press conference, Orange defenders have praised the system, for good reason. The players often remark that the defense allows defenders to fly around the field, go fast, hit people hard, and cause turnovers. There’s no denying the results of that as Syracuse’s 14 takeaways by the defense leads the nation.

However, this presents the case of the defense trying to run before it can walk. I can’t speak for every defender, but it’s entirely possible that the defense is too tunneled in to the philosophy of making a play and causing a turnover. Some of the shoulder tackles we saw against Duke could support that theory as it seems like players are hunting for big hits and turnovers rather than completing a tackle.

“This week, there’s been a big emphasis on making tackles and bringing the guy down,” said Kingsley Jonathan in the lead-up to the Liberty game. “We’ve gotta carry that over into the game.”

We’ve seen coaches all over the country, not just at Syracuse, preach how important fundamentals are. By installing a new system where defensive speed and power is rewarded, some of SU’s defenders may have let those simple tackling fundamentals slip. In turn, defenders are taking advantage and fighting for extra yards, or worse.

Just look at Jarett Garner’s touchdown for Duke towards the end of the first half. He should have been stopped for a 10-yard gain. Instead, Geoff Cantin-Arku throws a shoulder tackle that Garner easily brushes off and goes into the endzone. Not only did Garner gain 42 more yards on that play than he should have, Duke got gifted six points because Cantin-Arku didn’t wrap Garner up.

That also brings up another potential tackling issue that Syracuse needs to address. On that play, it seemed like Syracuse stopped playing because they expected Cantin-Arku to finish that tackle. However, Garner caught the Orange sleeping and took advantage of the fact that no one from Syracuse was ready to respond if Cantin-Arku didn’t complete the tackle.

That translates to the run defense. Too often it seems that the Syracuse defense expects running backs to get stuffed at the line of scrimmage. However, opposing running backs have routinely broken through the scrum that is the trenches and caught the Orange second-level off guard. That leads to eight-yard gains or more that Syracuse can’t afford to allow.

“You can’t really look and expect that one person to make a tackle,” said Ifeatu Melifonwu this week.

What is the point of all this? Well it goes back to the point in the title of this piece: Syracuse is trying to run before it can walk. I feel like the fans and to some extent the players have gotten caught up in the eye catching highlights that have been created by SU’s caused turnovers this year. But if the Orange defenders ignore the fundamentals of tackling, the turnovers will mean nothing if teams can routinely exploit that laziness for a lot of yards.