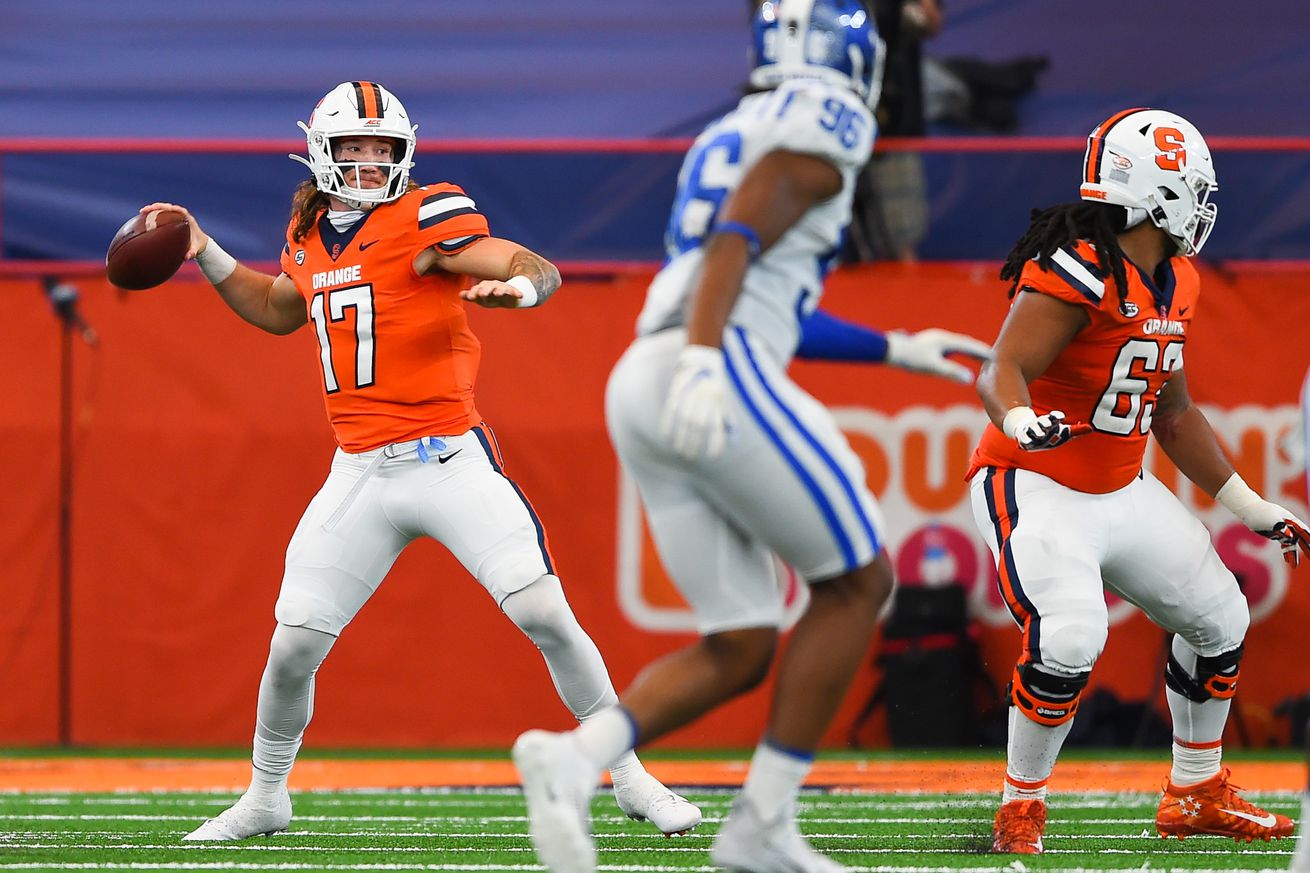 The Duke Blue Devils came into Saturday’s game against the Syracuse Orange with 408 total rushing yards through four games. That’s an average of 102 rushing yards per game, which put the Blue Devils as the third-worst rushing team in the ACC heading into the weekend.

The script completely flipped for Duke on Saturday as the Blue Devils rushed for 363 yards against a depleted Syracuse defense. Despite forcing four turnovers, Syracuse couldn’t stop the Duke rushing attack and couldn’t develop much offense as the Orange lost 38-24 to the Blue Devils.

The injuries continue to pile up for Syracuse as well, as Tommy DeVito injured his left ankle after taking a sack in the fourth quarter. He was helped into the locker by trainers and came back to the sideline on crutches and in a boot.

“Based off of some of the stuff I’ve heard, it’s not good,” said Dino Babers. “We’re all pulling for him and we wish him the best.”

Babers also provided updates on Andre Cisco and Jawhar Jordan, stating that both guys could be out for “a long period of time.” Cisco’s absence, in particular, seemed to greatly affect Syracuse’s defensive effectiveness against Duke.

Duke’s two running backs – Deon Jackson and Mataeo Durant – routinely hit holes up the middle for big gains. Jackson rushed for 169 yards while Durant added 163 yards and two touchdowns. Before the Syracuse game, neither Duke running back gained more than 86 yards in a game this season.

Syracuse has struggled against the rush throughout the entire 2020 season. Today, lazy and missed tackles helped Duke gain a lot of yards after the initial contact. Duke running backs and wide receivers routinely brushed off Syracuse defense for more yardage.

Other various injuries seemed to hold back Syracuse as well. With Cisco, Eric Coley, and Tyrell Richards out for the game, as well Ja’Had Carter, Geoff Cantin-Arku, and Mikel Jones missing some time during the game, the Syracuse defense struggled to keep up with a Duke offense that ran 102 plays on Saturday.

“Duke did exactly to our defense what traditionally we do to other people’s defenses when we’re right,” said Babers. “When you get a play count that high on a defense that’s as active as our defense, it’s not fair.”

This marks the first time that the Syracuse youth was aggressively tested, which gave the Duke running backs freedom to explore the second level of the Orange defense frequently. The same can be said for Chase Brice, who didn’t look incredibly impressive or explosive, but still found a way to throw for 270 yards and two touchdowns.

While the defense had its fair share of struggles, the offense did not help their cause. Syracuse only gained 11 first downs to Duke’s 36. The 11 Orange first downs is actually lower than the team’s season average per game of 13. Multiple dropped passes from the wide receivers and many questionable play calls came back to haunt Syracuse.

Surprisingly, after a solid game against Georgia Tech, Sean Tucker was limited in action against Duke. After running the ball 24 times against the Yellow Jackets, Tucker only carried the ball 12 times for 53 yards against the Blue Devils. That does mean he produced rushing numbers with similar efficiency in back-to-back weeks, but perhaps a late second-half injury affected his influence on the field.

Babers knows that his offense is supposed to establish a high temp and to be fast. However, with multiple key offensive linemen such as Dakota Davis and Chris Bleich unavailable and the top three running backs from the spring not available in Abdul Adams, Jarveon Howard, and Jordan, the Orange hasn’t been able to produce the same tempo it has during the first years under Babers. Syracuse only ran 52 offensive plays compared to the 102 from Duke.

Most people will look at DeVito and say he didn’t have a great game with only a 50% completion rate. But with the amount of dropped balls by the Syracuse wide receivers, DeVito’s numbers are very deceiving. He still completed 13 passes for 255 yards and two touchdowns, even if two of those passes (the two touchdowns) combined for 132 yards.

The play calling returned to a confusing form against the Blue Devils. It seemed like many of the designed plays were for all the receivers to run routes that routinely took them 15 or more yards past the line of scrimmage and pray that DeVito’s strong arm could hit them. Most of DeVito’s passes were on the money as well, but the dropped passes stung as many big-play opportunities were wasted.

“When you got people dropping balls in certain situations, you can’t have that,” said Babers. “You can’t have that many dropped balls if you’re going to be attacking people in the back end that way.”

The Syracuse offense that fans are used to seeing from a Dino Babers offense showed up in the fourth quarter, where DeVito completed multiple quick passes for medium yardage. That tempo seemed to only be stopped by DeVito’s injury, but it gave Syracuse an insight as to how the offense succeeded in the past and how it could perform in the future.

Unfortunately, all bets are now off on the season with key contributors out on both sides of the ball. As Babers confirmed that DeVito and Cisco could be out for a while, the attention for Syracuse now shifts to damage limitation as the depth of the Orange continues to get tested. And Babers knows that he is running out of options on his bench to replace the injuries that have piled up for Syracuse.

“We’ve got to get our depth back up,” said Babers. “Duke rolled in here with their football team and they had more players on their travel squad than we had in a home game.”