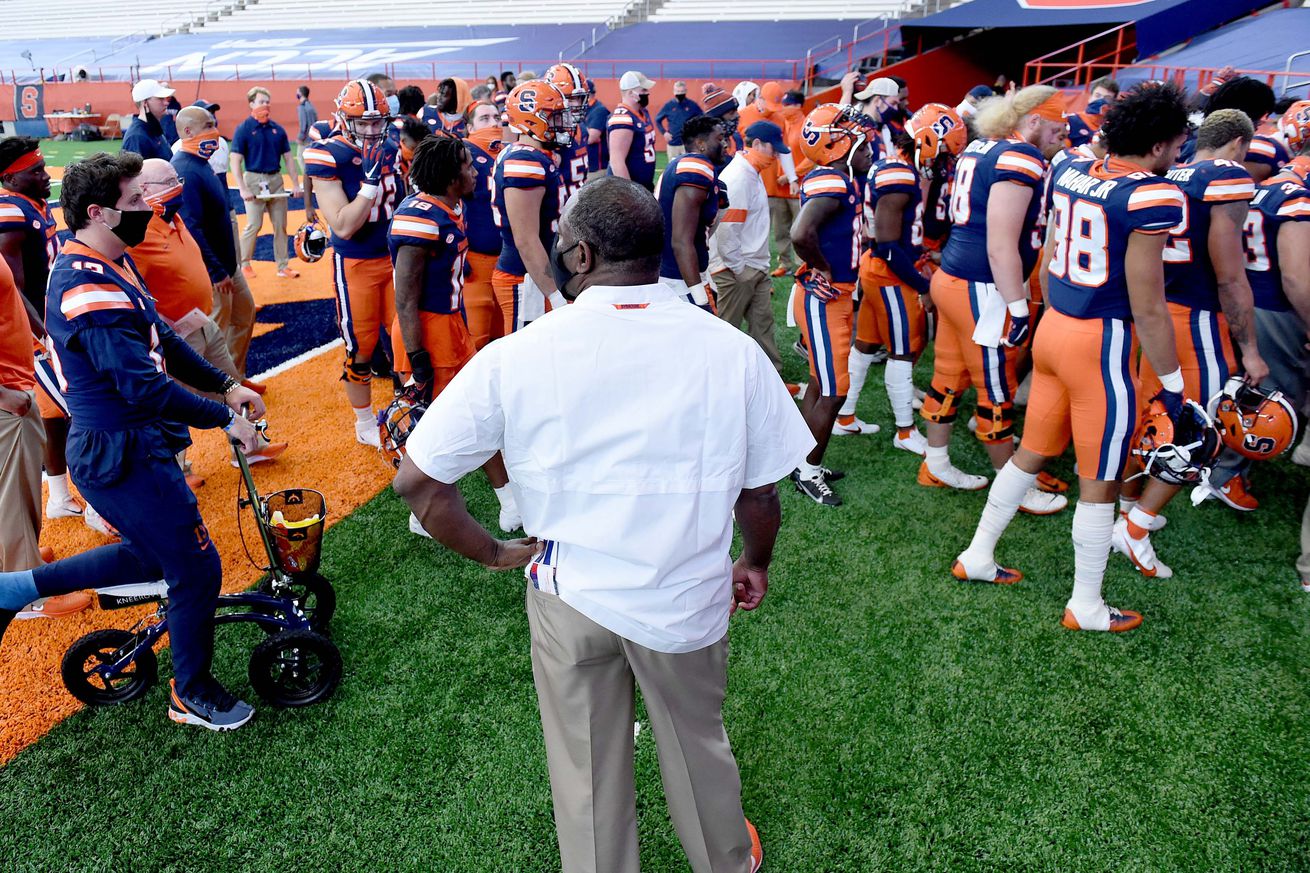 For many in the fan base, we’ve reached a bit of a crossroads

It’s been pretty tumultuous around the Syracuse Orange football program for the last two falls. Since going 10-3 and finishing the 2018 season ranked No. 15, Dino Babers has turned in a 6-11 record in the 17 games since. While the 10-3 season still certainly happened, Syracuse fans are getting antsier by the day now — especially following a disastrous 38-21 loss to Liberty on Saturday.

What a coach does in the moments following these sorts of low points can say a lot about them — as people and professionals. Fans have differing standards for what they “need to hear” in the face of adversity, but a coach taking onus for what’s gone wrong is usually the bare minimum ask.

For me, personally, I was hoping to hear Babers address a lack of adequate preparation for Liberty’s run game, overall execution issues on defense and maybe a lack of discipline that helped contribute to the loss. Obviously we have a lot of injuries and this season’s weird, and I’m understanding of the challenges that can create. But I also don’t think they can be crutches for any and all errors, and hearing about them doesn’t explain away the existential crisis among Orange fans. Ideally, Dino owned the loss and what created it, then provided something tangible to look at going forward.

Unfortunately, he offered the sentiment below instead, when addressing the fan base.

Babers asked about his message to the fanbase: “We’ve got a lot of young people playing and we’re going to have to get better.” He reminds them of the Virginia Tech and Clemson upsets. Said they need to have faith.

As I noted on Twitter afterward, this is the same energy as “I flooded the basement and the Christmas decorations are ruined, but remember that steak dinner?” Yes, the good thing happened in the past, but what does that have to do with the disappointment we’re feeling at this very moment?

We know there are young players out there, and we know they have to get better. We remember Virginia Tech and Clemson upsets — and also remember they took place four and three seasons ago, respectively. If using those past wins as ways to deflect wasn’t bad enough, though, saying that Syracuse need to have faith is really what irked me most. The official quote around us keeping the faith:

You can say this early on in a tenure, and in fact, Babers did here at Syracuse. He asked us for belief without evidence and most had it for two years before the payoff in 2018. When you can’t say it is during your fifth season, when you’ve lost nearly two-thirds of your games since, and fans are clearly restless about what the hell just happened following a catastrophic loss.

The word “expect” is perhaps the most problematic, as it acts as a form of instruction. He’s not asking us for faith, but saying it should be there based on some previous returns; previous returns that are the exception instead of the norm when looking at his time at Syracuse so far.

Appropriately, Sean seemed to capture everything wrong with this line of thinking in one simple statement, which became the title of this post: If you always have faith, you never need results.

If Babers didn’t just expect faith, asking for it wouldn’t even be the worst thing following a bad loss. He’s requested it before, and fans bought in. But that was on the way up the bell curve. Now, you’re potentially on the downward slope. That faith needs to be earned again. Since you’ve done it once already, it’s theoretically easier to get back. It’s still a request, however, not an expectation that it remains.

This is no “get out of the car” moment for Babers given the state of this season and the roster, and the fact that he actively looked to address Syracuse’s issues by getting transfer players and hiring new coordinators means he knew last year wasn’t good enough. Acknowledging it and addressing it successfully, though, are two different things. As an FBS football coach, you can only survive for so long while just trying to succeed.

Of course, Dino can rebound from this, but there are no guarantees it happens. And honestly, he made his own job harder there (at least with fans) with yesterday’s post-game comments. In the past, I’ve been willing to defend Babers’s tenure based on the highs and what appeared to be awareness of the situation and the fan base on his end. When paired with yesterday’s loss, comments about faith and past wins make me question just how tuned into Orange supporters (and this program’s recent football history) he really is at the moment.

To an extent, being a fan is always a test of blind faith. Unless you’re a fan of a handful of teams — college or professional — you’re going to be disappointed by the results far more often than you aren’t. That dynamic is insane, yes, and would make no sense in any other aspect of your life. But you’re used to it at this point.

It also only applies to the logo on the uniform, because colleges and franchises have existed before the current coaches and players, and they’ll exist after, too. Your faith, as we well know, is in the feelings and memories you attribute to that logo. Even the most destitute teams have their diehards. There’s a reason the least successful coaches don’t.

If Babers has fans’ faith at all now, it’s because they’re willing to stick by him despite the on-field product of late. But that’s by choice. Faith is earned over time for coaches, not just casually awarded for showing up. And every so often, you do need to show fans why you deserve it, or it goes away.