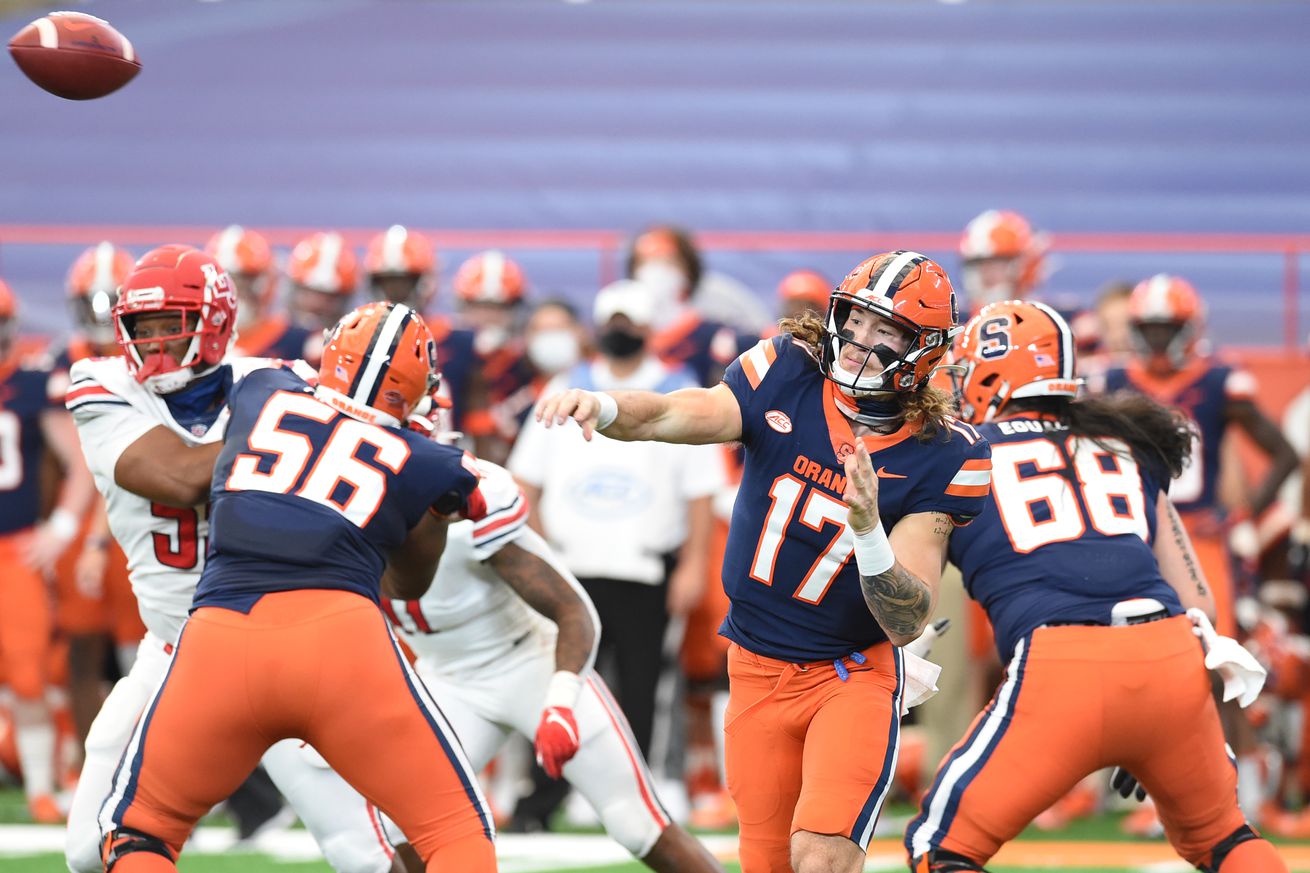 On the bright side, it wasn’t all doom and gloom

The last thing that the Syracuse Orange needed in a tumultuous 2020 season was a loss to a team playing in its third-ever FBS season. Unfortunately, SU couldn’t stop Liberty from running over the Carrier Dome turf as the Flames exacted revenge from last season’s shutout defeat.

It definitely wasn’t the prettiest game that the Orange played this season. The injuries aren’t helping Syracuse’s cause as there are many young players that are filling in for key contributors. All things considered, how did Syracuse grade out against Liberty?

This was a solid B performance until some of his late game drives. Rex Culpepper’s accuracy actually looked fairly good to start the game, especially during Syracuse’s first touchdown drive early in the first quarter. He seemed to be in tune with the wide receivers throughout the game. Culpepper’s deep ball and late game accuracy brings the grade down, but overall he didn’t have an awful game.

You’d like to see Culpepper complete more passes, but he wasn’t the primary reason why Syracuse lost to Liberty. 211 passing yards would have been Tommy DeVito’s second highest total this season. DeVito also hasn’t thrown three touchdowns passes this season. If Culpepper’s accuracy continues to improve, he’ll be a capable signal caller that can keep Syracuse in games.

Sean Tucker is not only Syracuse’s freshman of the year so far, he is Syracuse’s player of the year so far. Tucker ran for 111 yards and helped to set up manageable situations for the Orange to move the chains. A big part of why the offense has seemingly improved over the first games of the season is because of Tucker’s influence on the ball.

If I was just grading Tucker, this would be a surefire A. However, I’ve got to look at the other running backs on the roster, and it’s clear that Dino Babers and Sterlin Gilbert don’t trust the other running backs to produce the same way Tucker does. Markenzy Pierre only got one carry against Duke and didn’t receive any offensive touches against Liberty. Cooper Lutz received two carries and made a good outside run with one, but he didn’t receive too many chances to create with the ball.

It’s clear that the coaches are looking for someone to be as consistent with the rush like Tucker is, and he can’t be in the game during every drive with the style of rush that he employs. Tucker needs a break every now and then, and the running backs need to pick up the slack when he gets a breather.

As I said above, the wide receivers seemed to be very in tune with how Culpepper wanted to throw the ball. In particular Culpepper had a solid connection with Taj Harris and Anthony Queeley, as the duo combined for 14 of Culpepper’s 19 completions. Both also scored touchdowns on some well-run routes.

The dropped passes weren’t as prevalent as they were against Duke, but there were still some key drops from experienced and young players alike. Hopefully those get cleaned up as the season goes on.

At this point, any time Gilbert uses the tight ends I’ll give him an A. I think some fans forgot how much of an impact that the duo had on the game and that was shown against Liberty. Aaron Hackett got two catches, including a touchdown and Luke Benson continued to show that he has the speed to beat most defenders who are covering him.

Ideally I’d like to see them more. Their differing styles – Hackett with his more bruising runs and Benson with his speed – can create matchup nightmares that will confuse opposing defenses. I’m not saying that the tight ends are Travis Kelce, but they certainly continue to prove that they need more attention in the receiving game.

I’ll let Steve comment more on this in his trenches piece later this week, but I think that there were some better performances this week. The sacks allowed were mainly on the offensive line so the grade isn’t that high, but for the most part Culpepper seemed to have time to throw.

The Mikel Jones forced fumble and recovery along with Lee Kpogba and Marlowe Wax’s sack keeps this grade just barely above an F. Once again, the linebackers looked dreadful against the run. There were some runs where it seemed like the linebackers completely evacuated the middle of the field which left the Liberty running backs on an island against the young secondary of the Orange.

The linebackers didn’t do that well at containing the outside run either. That being said, no matter where the run was located, the Liberty running backs seemed to easily breeze past the Orange linebackers, which is just unacceptable. Something needs to change with how this group defends the run or this could be an issue that stretches far beyond the 2020 season.

The defensive backs still managed to limit Liberty’s effectiveness in the passing game, but the biggest issue that plagued Syracuse through the past two games still found its way to the defensive backs: tackling. This was more prevalent in the younger players, specifically Rob Hanna and Ja’Had Carter. There were multiple players where a lazy or missed tackle allowed the Liberty receivers to gain extra yards.

As unfortunate as it sounds, the defensive backs need to step up in the run game as well in order to support the linebackers in the run game. They’re just as important to prevent opponents from gaining too many yards, and the Flames took advantage of the Syracuse youth in the secondary to find a few more yards. We saw how important it was to have Trill Williams’s communication and influence in the second half. The Orange secondary needs that type of leadership to get the assignments right in run defense.

This is the special teams that we’ve come to know and love. This was Nolan Cooney’s best punting game to date, with all six of his punts landing inside the 20. Andre Szmyt didn’t have to do much with just three extra points needed, but the return game was much improved. Nykeim Johnson had much better decision making with his returns. He found multiple holes in the return defense and set up the Orange well with decent field position. Tack on Isaiah Jones reacting well to the muffed put and it was an all-around good day for the special teams.

There’s definitely been adjustments made to incorporate more unique and different routes in the passing game. There were less downfield shots and more medium range and quick passes all over the field. That was a great positive to see but there were still multiple drives where it just seemed like Syracuse abandoned the run. Even if Tucker isn’t in the game, you can’t just ignore the run game and treat it like an afterthought.

Now it’s your turn. What grades are you giving out to Syracuse for the Liberty game? Sound off in the comments below.