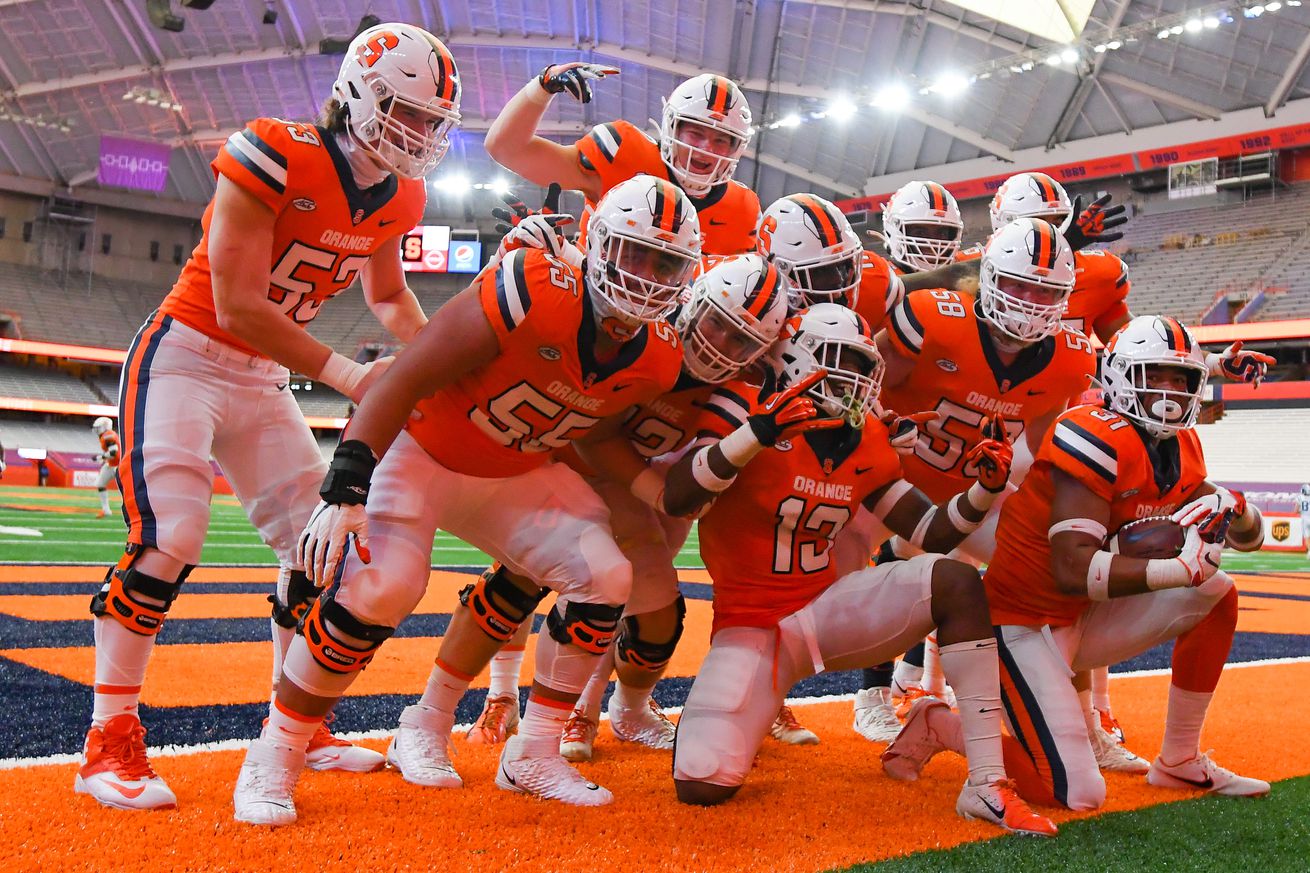 The Syracuse Orange crashed and burned back down to Earth after a stunning 38-24 defeat to Duke on Saturday. For the first time this season, the Orange didn’t look particularly impressive on either side of the ball as injuries raised major concerns about SU’s effectiveness for the rest of the season.

Nonetheless, there are still grades to hand out and after the high from the Georgia Tech game, the grades are a shocking return to reality for Syracuse as major areas that they needed to work on were highlighted.

There’s no sugar coating some of these grades. Let’s jump straight in.

This is going to surprise a lot of you, but a lot of us on the staff, including me, agree that Tommy DeVito was not to blame for the large majority of his incompletions. We’ll get to the reason why those balls were incomplete, but DeVito’s accuracy was much better than we’ve seen from the first few games of the season. Some of his pocket movement decisions were still questionable but that was a combination of good coverage from the Duke secondary and the Duke defensive line overwhelming the Syracuse offensive line. Despite that DeVito still threw for a season-high 269 yards.

Rex Culpepper’s three passes weren’t exactly on target as well, which raises a few concerns given that it appears that the Florida native will be the starting quarterback for the foreseeable future, and for possibly the rest of the season.

Tucker appeared to be banged up late in the second half and it showed as Trebor Pena and Markenzy Pierre highlighted the same rushing concerns that fans had through the first two games of the season. Hopefully we’ll get an update on Tucker’s status soon because if he’s not available, Syracuse once again loses a key cog in it’s offense.

The only thing that prevents me from giving these guys a F is the Taj Harris touchdown and the drive that Syracuse started to develop at the beginning of the fourth quarter. Otherwise, the wide receivers were the biggest reason why DeVito’s numbers and completion percentage aren’t higher.

If you made a word cloud of the TNIAAM staff Slack chat during the game, the biggest word would be “DROPS.” I lost count of how many balls every single receiver dropped. Some wideouts dropped more balls than others (looking at you Courtney Jackson), but almost every drop came from a decent throw from DeVito that carried a high percentage of being caught. This was an incredibly disappointing day from the wide receivers.

Syracuse doubled the amount of receptions that the tight ends had on the season during the game against Duke. Luke Benson reminded everyone of his blazing speed with his 53-yard touchdown and Aaron Hackett reminded everyone that he can still bully his way for extra yards.

This grade was initially a B+, but screw it, I’m giving them an A. Maybe the combination of this grade and the lackluster performance of the wide receivers against Duke might convince Sterlin Gilbert to draw up more plays for his tight ends.

It was a return to reality for the offensive line as the talented Duke defensive line punished the Orange en route to six sacks. Once again the pocket collapsed incredibly quickly, preventing DeVito from getting comfortable in the pocket. A switch in tackle positions didn’t help keep DeVito clean as Airon Servais in particular struggled once again.

It also was a sack that injured DeVito, which may have been a freak accident, but the Syracuse offensive line has now allowed 21 sacks through four games of the season. These guys continue to struggle, especially during one-on-one matchups.

I’m not sure how much the staff or fans will agree with me on this point, but after seeing multiple games of the 3-3-5, the linebackers are the most important unit of the defense’s effectiveness. They need to be incredibly versatile in all three aspects of defense: run defense, pass rushing, and coverage. From what I can gather from the first games of the season, SU’s linebackers only truly excel in pass rushing. They’re really good in that area and one or two linebackers should be brought every play to pressure the quarterback, because every linebacker on the Orange roster seems to be very good in that area.

This is where the linebacker grade drops: the run defense. These guys made some lazy attempts at tackles and missed other tackles completely as Duke waltzed to 6.2 average rushing yards. That’s unacceptable and the linebackers are the first line of defense that ensures opposing running backs only get two or three yards per rush. Syracuse hasn’t been good against the run the entire year and the first area that should receive attention to fix that weakness should be the linebackers.

I thought the coverage looked reasonable for the most part against Brice and his wide receivers. At the beginning of the game, the Syracuse defensive backs limited the yards after catch that the Duke wideouts gained. As the defense tired out, the lazy and missed tackles trickled their way to the linebackers as the defense backs missed tackles not just against their receivers, but against the running backs as well.

It’s clear that the defensive backs are still the best overall unit that Syracuse has at its disposal, even without Andre Cisco and Eric Coley. But the tackling, much like the linebackers, needs to be more precise to prevent receivers getting more yards after catch that the Blue Devils gained later in the game.

Nolan Cooney continues to do a fine job in the punt game and Andre Szmyt continues to be brilliant after drilling a 48-yard field goal. The main reason why this grade is so low is because of one guy: Nykeim Johnson. His decision making on most of his returns were abysmal. It seems that Johnson wants to do more with the ball because he knows that he has the speed and skill to make a play. However, he needs to know when to say when. By that I mean he needs to learn when to not get greedy for more yards on the return. It seems like that he wanted the home run return on every single kick and sometimes that’s not the correct decision.

For a change, this is a grade that reflects both sides of the ball. I know that the play calling can’t fix the dropped passes, Syracuse seemed to call too many deep routes for the receivers to run, which is a huge double-edged sword. Against Georgia Tech the deep routes opened up touchdowns and there’s an argument to be made that more deep balls should have been caught as DeVito was pretty accurate.

But it seems like every play was a deep throw, where that early fourth quarter drive showcased the success Syracuse could have with a different style of play calling. That drive featured multiple short-to-medium range passes that were thrown quickly. That developed the fast temp Syracuse should have been working out for the entire season. However it seems like the majority of the playbook called for the deep routes that DeVito proved today he can hit, although that is now mute due to his injury.

Sometime else that was also puzzling is that there were multiple drives that only featured pass plays, and the common theory among fans and coaches is that developing the run game opens up the passing game. I talked about Tucker’s efficiency in the running grades, which makes it more puzzling that some Syracuse drives didn’t make use of him to bully his way for some extra yards. Whether his apparent injury played a factor in his lack of rushes remains to be seen, but the decision to not utilize Tucker’s abilities is a confusing one.

I usually don’t talk about the defensive play calling here, but against the Blue Devils it warrants discussion. During multiple pass plays Syracuse only rushed three or four guys, all from the offensive line. It seemed like the linebackers dropped back in coverage more often, which I think is a mistake.

Now it’s your turn. What grades are you handing out to the Syracuse units? Sound off in the comments below.