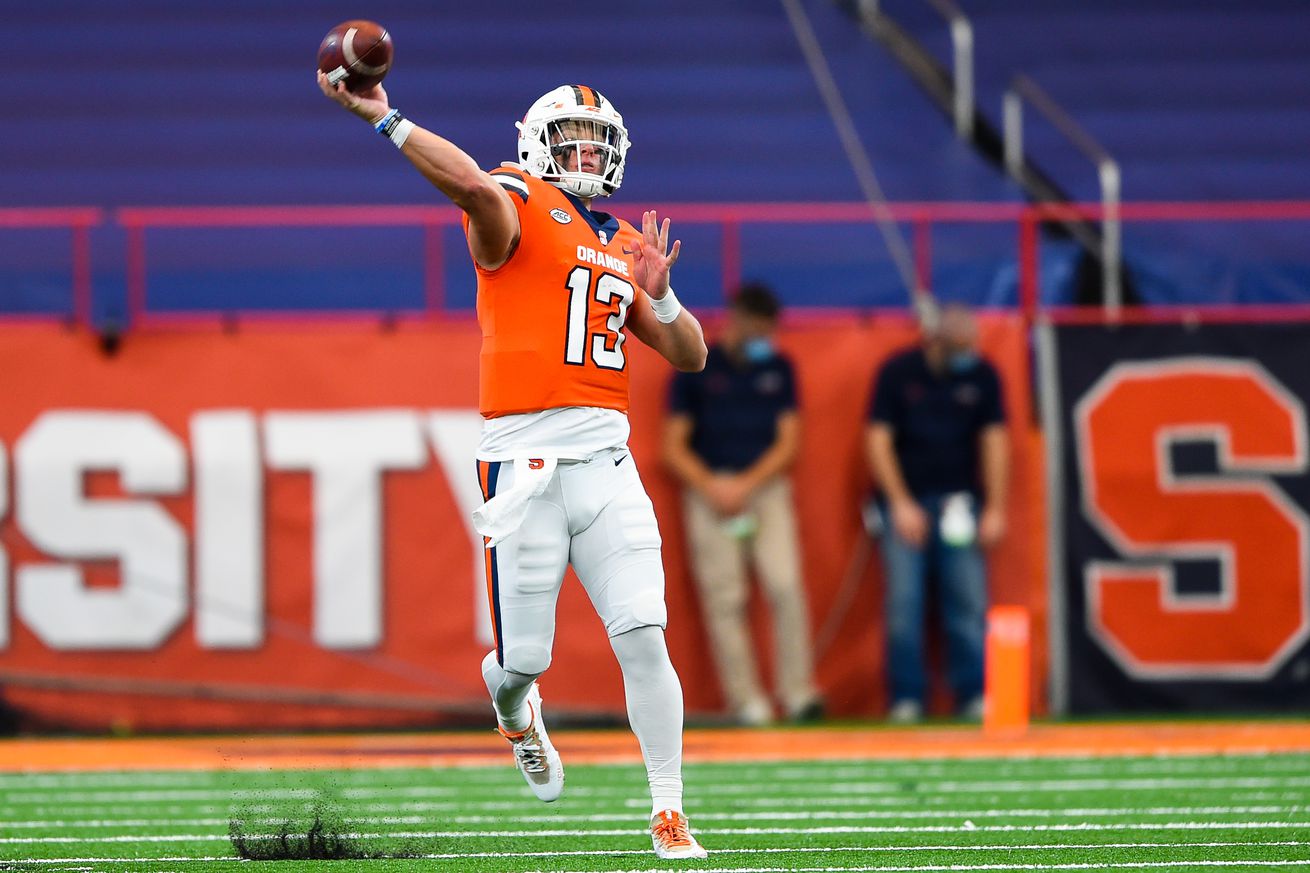 The increasing gulf between the intended outcome vs. what we’re seeing on the field each week.

Following a disappointing 2019 season, the Syracuse Orange football team looked toward 2020 as a bit of a program reset. Roster departures left holes and recent recruits weren’t necessarily ready to fill them just yet. But a manageable schedule and new coordinators on both sides of the ball seemed to provide an opportunity to overachieve.

No spring ball, limited fall camp, minimal in-person instruction prior to late July. There were COVID-related holdouts, and a significant list of injuries, even in the offseason. The schedule, once an easier jaunt that could make a 4-8 team 6-6 turned into a gauntlet by way of the ACC’s 10-game schedule.

Syracuse’s best laid plans were tossed out the window months ago, and yet, they appeared intact just the same a couple Saturdays ago after the Orange dispatched Georgia Tech, 37-20 at the refurbished Dome. Beating a lower-tier ACC squad by three scores was a sign something was starting to work. Or could work. It just needed some time to finish coming together. SU could still salvage 2020, to an extent.

Then this Saturday happened, of course. The number of injuries for this Orange squad continues to climb, and I’d argue more than half of the intended depth chart for this season is currently injured or holding out due to COVID concerns. Quarterback Tommy DeVito was seemingly added to that list in a long-term sense after suffering a fourth quarter ankle injury. Even the typically cryptic Dino Babers is openly pessimistic about his status already.

A Syracuse team that had appeared to figure some things out against Georgia Tech had a whole new collection of problems against Duke — from zero ability to stop the run, to third-string defensive backs being thrust into key roles, and perhaps more drops than I’ve ever seen from receivers in a single football game.

That said, there WAS a plan against Duke. You could see the outlines of it pretty clearly, and it could’ve worked too, if not for those aforementioned drops and some questionable DeVito decisions here and there.

More than he has in perhaps any other Syracuse game, DeVito was stretching the defense and making them cover the whole field. He was pulling defensive backs away from the line of scrimmage and potentially opening up the offense for screens and the rushing attack. Whether it was the initial idea or not, all of that can work… if you’re connecting on those deep throws. As you know, Syracuse — mostly due to receivers not named Taj Harris or Luke Benson — was not.

Meanwhile, the defense traded off between big turnovers and big plays allowed. The script seemed set there too, as Duke quickly discovered the Orange couldn’t stop the run. The Blue Devils would largely speed past the inexperienced SU linebackers once they broke through the line. The turnovers were the only thing keeping Syracuse within striking distance. That’s been the idea of this defense since week one this year.

What we’re focusing on above are all plans, however. At 1-3, though, Syracuse now needs to face the reality of the current situation.

DeVito could very well be lost for the year, thrusting an unknown quarterback into the spotlight, running an offense he may or may not have mastered just yet (that said, it’s debatable whether DeVito did, either). Down three running backs already, SU lost Sean Tucker at least temporarily in this one. Geoff Cantin-Arku seems like he’ll be out a bit on defense, joining players like Eric Coley and Andre Cisco among the big absentees. The offensive line still lacks every intended starter. The list could continue.

On defense, there are clear weaknesses, covered up by some of the country’s best ball-hawking. On offense, there are questions abound and a real doubt around Sterlin Gilbert’s long-term prospects for this job.

So now, Babers and Co. need a new plan to match this reality. Fans don’t have to feel obligated to follow suit, but failing to recalibrate will make watching the remainder of this season all the more miserable. Syracuse isn’t doomed, though the odds are increasingly stacked against them for the rest of the slate. We don’t have to concede defeat, but if you don’t want to focus on all of the plans that didn’t work, it’s best to keep an eye on what’s progressing in the margins.

By the end of year five — a throwaway season by most accounts — perhaps the most frustrating part of this era of Orange football will be that we still don’t know how it’s going to turn out. We know the apex of what it can be, and this year may give us a glimpse of how low things can go. Still, aside from 2018, the most tangible things we’ve had since the start of the 2016 season are plans, in one way or another.

Is that enough for yet another fall? Should it be? There’s no doubt that the ideas behind each Syracuse season since Babers arrived are sound, and the plans to improve always show glimpses of working out. In 2020, though, plans may be the only thing we really remember — perhaps in football and life, in general.

Whether it’s fitting for this disastrous year or a frustrating cherry on top of everything else is up to you. But from my own viewpoint, I’m still willing to see if these plans turn into anything worthwhile. Even if evidence to this point tells me I shouldn’t.