Manny’s co-owner Bill Nester remembers when hundreds of people would flow in and out of his Marshall Street store on Syracuse game days. Then the pandemic hit, and hundreds turned into “maybe a dozen or so,” Nester said. Until last Saturday, when 900 students were allowed into the Carrier Dome for a men’s lacrosse game and only 250 showed, the fan experience on the Hill was dormant for 370 days.

Shirt World owner Dave Jacobs had similar experiences. So did Scholars and Champs owner Bert Aufsesser, whose store is located downtown. The pandemic has pushed apparel store owners to their creative limits to sustain a viable income. Students have kept them afloat, too.

Manny’s has served Syracuse University’s campus since 1949. The shop sells SU jerseys, hats, hoodies and accessories. Nester has been a partial owner since 1983 and has kept the business alive through the worst of SU’s football lulls and basketball’s postseason woes.

But the pandemic has been hard. Nester recalls that even in the aftermath of the Pan Am Flight 103 plane crash in 1988, students came in to buy Christmas gifts while sobbing. People were still allowed to enter and shop freely. Lines could snake all the way to the back of the store, Nester said.

Decades later, it’s the students who are keeping these businesses viable, said Jacob, who played as an SU placekicker in the 1970s. His family has owned the store since 1977, and without a website, sales are solely dependent upon who walks in.

More stories on local businesses during the pandemic:

“‘I’ve had students that would come in and say ‘Jeez, thanks for being here and being open,’” Jacobs said. “And our whole feeling was, ‘It’s not us, it’s you.’”

December and January were particularly tough for Scholars and Champs since students didn’t return for holiday shopping after Thanksgiving, Aufsesser said.

The long winter break, coupled with the lack of incentive to buy apparel for games since fans weren’t allowed in the Dome, dropped Aufsesser’s typical influx of 50 to 60 people a day to around 10, he said. But while the in-store sales are down, his online profits have increased.

“I guess it’s an advantage of being younger,” said Aufsesser, a Class of 2000 graduate. “I grew up with social media … I definitely know the power of Instagram and Facebook and how that can influence people to make a purchase right away.” 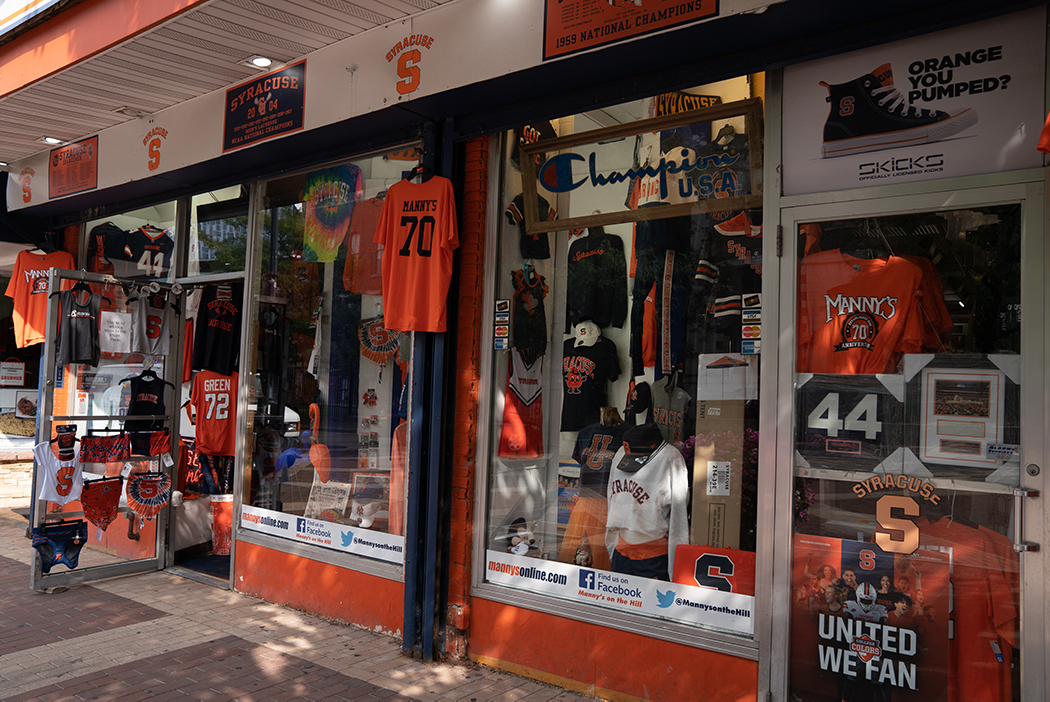 Manny’s has been able to remain open because of a number of students still visiting the store during the school year. Emily Steinberger | Photo Editor

Scholars and Champs was just a year old when the first COVID-19 case was recorded in Onondaga County, but Aufsesser is confident the store will make it through the pandemic, just like the more established SU apparel stores. He has added name recognition among SU students because of popular customers, including Khalid, who came during his 2019 visit to Syracuse for Block Party. Former Bachelorette contestant Tyler Cameron came by his store as well.

Aufsesser used Instagram and Facebook to organize gift card giveaways and placed advertisements to promote the store’s “315” sale on March 15, a play on the Syracuse area code. All are ways to get people to “come check out the store,” he said.

It’s very strange. You’re lucky if you see one or two people walking down the street.

For Jacobs, without a website or a social media page for online shopping, he’s turned to creative promotional offers like buy one, get one free specials where any item in the store comes with a free jacket or shirt with an orange and blue block ‘S’ on the front, among other items. Jacobs stands on Marshall Street daily, reminding passersby of the deal.

Manny’s does have its own website, but most of the purchases since the pandemic began have happened in store, Nester said. The store used Instagram to promote online discount cards and now St. Patrick’s-themed outerwear.

He’s hopeful that by the fall, regular, pre-pandemic business will start to resume. For Nester and Jacobs on Marshall Street, students played — and will continue to play — an integral role in their return to normalcy.

“These kids at the university have done a fantastic job of helping locals, us,” Jacobs said. “And we can see the light and understand, ‘Hey ya know what, we’re gonna get through this.’”