After 30 minutes of football, Liberty had nearly quintupled Syracuse’s rushing yards. Its offensive line cleared gaping holes for Flames runners, and its read-option attack put SU’s front-six in an impossible position, leading to first-half touchdowns of 75 and 52 yards.

Though two turnovers prevented Liberty from blowing Syracuse out in the first half, it was clear LU could establish whatever rushing approach it wanted. The Flames out-gained Syracuse on the ground 253 to 42 in the first half and 338 to 97 overall.

In the second half, Liberty’s running dominance opened up its play-action game. Liberty scored four of its five touchdowns on the ground and finished with 7 yards per carry versus Syracuse’s depleted defense.

Even with injuries mounting, Syracuse (1-4, 1-3 Atlantic Coast) losing to Liberty (5-0), which fully joined the FBS just last year, represents the low point of the Babers era. The 38-21 defeat stains the reputation of a program that just two years ago won 10 games and a bowl game. It’s SU’s first nonconference defeat at home since 2017, and Liberty’s first win against an ACC team. After getting trampled by the Flames and falling for the second-straight game in a rapidly sinking season, Syracuse enters a matchup against Clemson, winners of two of the last four National Championships, as one of the Power Five’s worst teams.

The Flames strutted into the Carrier Dome like they belonged. During warmups, quarterback Malik Willis bobbed his head and danced to G Herbo’s “Who Run It,” and slapped hands with his coaches and teammates. Liberty entered the game as 3.5-point favorites, coming off four straight victories and facing a Syracuse team without starting QB Tommy DeVito, running back Jawhar Jordan and lineman Dakota Davis, among several others.

After both teams traded three-and-outs to begin the game, Rex Culpepper engineered a 61-yard touchdown drive. But Liberty running back Shedro Louis responded with a 75-yard rush up the gut, tearing down the field untouched.

“If you’re going against an option offense, you’ve got to stop the dive,” Babers said. “If you do not stop the dive, the offense will do what it did today.”

Freshman safety Robert Hanna took a poor angle in the second level for Louis’ score, but Louis had already gotten downhill. SU’s inexperience — the Orange started five freshmen on defense — was apparent from the start. That dive play, one of the simplest in football, was basically unstoppable on Saturday due to the threat of Willis keeping and burning SU’s defensive ends to the outside.

Liberty’s next drive went 88 yards on 11 plays, almost all of which were read-option runs or bubble screens. Syracuse’s young defense showed little resistance and fell behind 14-7.

Culpepper, in his first start since beating testicular cancer, flashed at times. Syracuse didn’t appear to tweak its offense for him, and he made all the throws DeVito has been asked to attempt. He finished 19-for-40 for 211 yards, three touchdowns and an interception. Babers said postgame the receivers around him needed to step up more. 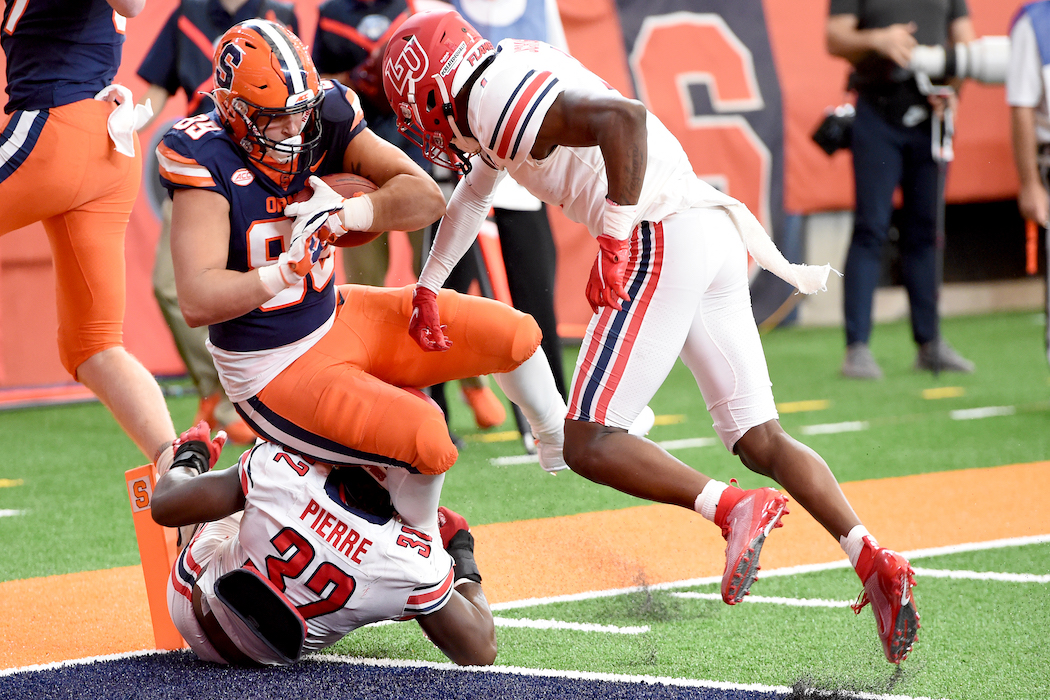 Culpepper’s second touchdown of the game came on a misdirection play, where he found tight end Aaron Hackett in the flat after he motioned across the formation. That score knotted the game at 14.

Two Liberty turnovers — a muffed punt and a Willis fumble at the goal line — kept Syracuse in the game on the scoreboard, but only temporarily. Another Louis touchdown, this one for 52 yards, put Liberty back on top.

All game, Syracuse struggled to stop Liberty’s read-option attack. The threat of Willis tucking and running drew attention away from the middle and opened creases for the Flames’ tailbacks, led by Louis, who finished with 170 yards on 10 carries. It’s the second consecutive week the Orange struggled defending the run. Against Duke, Syracuse allowed 363 rushing yards, and two Blue Devils backs eclipsed 150 yards. The defense has allowed at least 275 rushing yards in three-straight games.

Syracuse’s 3-3-5 formation was once promising. It contained high-powered offenses North Carolina and Pittsburgh. SU forced 14 turnovers in its first four contests, the most in the FBS. But now, the unit’s decimated. Its best player, Andre Cisco, is heading to the NFL Draft. His sidekick, ballhawk Trill Williams, only played in the second half due to an injury suffered this week in practice, Babers said. Safety Eric Coley and linebacker Steve Linton also missed the game.

Three unanswered touchdowns, two of which came on runs, opened Liberty’s lead to 35-14 late in the third quarter.

“One of the reasons we’re not getting better is we’re constantly changing all the personnel,” Babers said. “As everyone else who’s playing us would say, ‘So what? That’s part of the business.’ We have to find out what our personnel can do, and we’ve got to stay consistent.”

Williams, playing most of the second half after being sidelined in the first, jumped up and banged his chest after a tackle for loss, trying to energize a comeback. On the next play, he forced a fumble, but Hanna couldn’t recover the ball before it trickled out of bounds.

A third-quarter toss down the right sideline to Taj Harris would’ve brought Syracuse back within two scores, but it slipped through his hands. After Syracuse punted, he threw his mask to the ground on the sideline, and an assistant coach hugged him, trying to calm him down.

#mc_embed_signup{background:#fff; clear:left; font:14px Helvetica,Georgia,sans-serif;
}
/* Add your own Mailchimp form style overrides in your site stylesheet or in this style block.
We recommend moving this block and the preceding CSS link to the HEAD of your HTML file. */

Want the latest in Syracuse sports delivered to your inbox? Subscribe to the D.O. Sports newsletter to read our best sports articles, sent to you every Friday morning.

Later, Culpepper found Anthony Queeley in the back left corner of the endzone for his third touchdown pass of the game — “First of many,” Queeley said — but it only made the score 35-21. A play-action strike to Johnny Huntley and a 10-yard read-option keeper from Willis set up a field goal, extending Liberty’s lead against a team that shut it out last year.

When Syracuse agreed to a three-game series with Liberty in 2018, it likely envisioned three easy, nonconference wins against a team new to the big leagues. Syracuse assistant athletic director Herman Frazier recently called the Liberty series a “perfect marriage.”

And aside from the controversies surrounding the university and its athletics department, Liberty popped up on Syracuse’s schedule to get pummeled three times, including twice in the Carrier Dome.

Only Liberty didn’t hold up its end of the bargain. Instead of an easy win for SU, Liberty handed it the worst loss since Babers took over in 2016.