The last time Chase Brice faced Syracuse, he manufactured a game-winning touchdown drive as Clemson’s backup quarterback in 2018. SU was one play from upsetting the Tigers for the second consecutive year, but Brice’s completion on 4th-and-6 doomed it.

Brice, now the quarterback for Duke, didn’t have to throw often to beat Syracuse again on Saturday. Instead, he turned around and handed the ball off 63 times. The Blue Devils turned to a rushing attack that posted 175 yards in the opening quarter and frequently opened up gaping holes in a SU defense that had plugged nearly every one of Syracuse’s own holes to that point.

Syracuse defensive backs Andre Cisco and Eric Coley have since suffered injuries, though, and the Orange’s run defense has suffered the last two weeks. Whenever the Duke (1-4, 1-4 Atlantic Coast) offense wasn’t fumbling the ball away and giving the Orange extra possessions, it ran for 363 yards in a 38-24 win against Syracuse (1-3, 1-3). The Orange finished the game without starting quarterback Tommy DeVito, who left injured in the fourth quarter.

“Duke did to our defense what we traditionally do to other people’s defenses when we’re right,” head coach Dino Babers said. “When you get a play count that high on a defense that is as active as our defense, it’s not fair to them.”

The Orange’s defense still forced five fumbles while recovering three of them. Geoff Cantin-Arku scooped and scored after a Cam Jonas strip sack in the opening quarter, Kingsley Jonathan and Cantin-Arku both forced fumbles of their own and Mikel Jones made a red zone interception late in the third quarter.

“I felt our legs got a little tired and guys felt a little fatigued toward the end,” linebacker Mikel Jones said.

Right from the game’s second play, when Cantin-Arku missed a tackle that sprung a 20-yard gain, the Blue Devils established their ground superiority. Duke marched its way down the field before Brice tossed a 26-yard touchdown to Jalon Calhoun, who beat Trill Williams on a crossing route. The Orange’s defense offered little resistance, a troubling sign for a group that constrained nationally ranked opponents North Carolina and Pittsburgh its first two games.

Babers opted to shuffle his offensive line, shifting usual left tackle Airon Servais to the right side and Matthew Bergeron to the left to potential address Duke’s star pass rusher, Victor Dimukeje. Both tackles held up on a 2nd-and-14, and DeVito fired a 79-yard catch and run to Taj Harris. The Orange’s offense had rescued its defense from a slow start, but that touchdown was one of just three first downs in the first half for the Orange.

Two drives later, Mataeo Durant scampered 50 yards straight through the middle of the Orange’s defense, now down another starter after Ja’Had Carter left the game with an apparent lower arm injury. Durant easily split through backup safeties Robert Hanna and Jonas, and a play by Ifeatu Melifonwu on the back side saved the run from becoming a touchdown.

Missed tackles and bad angles from linebackers and safeties led to Durant’s long run to set up Duke’s go-ahead field goal. The Orange’s offense, which found success on the ground for the first time in SU’s 37-20 win against Georgia Tech two weeks ago, failed to find the same yardage, despite the Blue Devils ranking last in defensive line yards against the run in the ACC. Playing without Jawhar Jordan — who Babers said on Monday had an “owie” — running backs Sean Tucker and Markenzy Pierre generated just 1.7 yards per carry.

“We’re not running the football consistently, there’s no way to get around it,” Babers said. “You can go out and throw the ball every snap and win, but you have to be extremely efficient. But when you have people dropping balls, you can’t have that many dropped balls if you’re going to be attacking downfield.”

Durant put the Blue Devils back in front when he ran 15 yards into the end zone, dragging Jonas with him on the way. The Orange’s safeties failed to prevent the Blue Devils from breaking off big runs, and Duke had six runs of 15 yards or more. Carter propelled Duke’s long passing touchdown at the end of the first half by pushing the Duke receiver past Jonas and into the open field, giving the Blue Devils a 52-yard touchdown and 24-14 lead 1:00 before half. 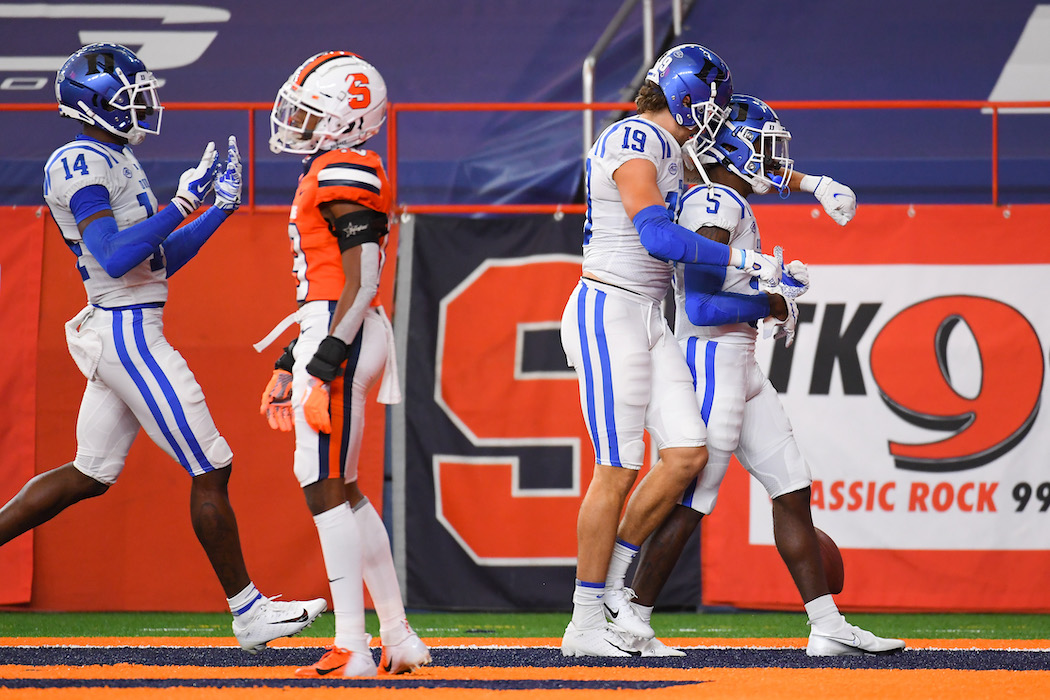 But Syracuse finally used its tight ends for a big play late in the third quarter, and it kept the Orange within striking distance. DeVito found Luke Benson for a 53-yard run, and he went almost untouched into the end zone. It was the first touchdown reception for a tight end group that combined for nine last season. Even when the Orange did score, though, they scored quickly, sending their defense back onto the field. They couldn’t sustain a drive and, despite two long touchdowns, crossed the 40-yard line of Duke on two other occasions, compared to 11 trips for the Blue Devils.

With each of the seven three-and-outs for the SU offense, the pressure grew on the Orange defense, but the unit’s resistance waned. The Blue Devils marched their way back into the red zone after the Benson touchdown, and, even though the Orange held Duke to three points on the next possession, a field goal extending the lead to nine was more than enough to hold off SU once DeVito went out injured.

On a second-down play, with the Orange methodically moving the ball down the field for the first time in the entire game, DeVito took a sack and had to be helped off the field by two trainers. He went to the locker room immediately and returned to the sideline in crutches.

“Based off of some of the stuff I have heard, it’s not good,” Babers said. “We’re pulling for him and we’re wishing him the best, but like I said, it’s not good.”

One play after DeVito went out injured, Rex Culpepper threw an inaccurate underneath pass to Harris. Despite catching the ball, Harris lost any chance for yards after the catch and failed to pick up the first down because of the pass.

Harris walked off the field in frustration, undoing his chin buckle. While Andre Szmyt trotted on to kick the field goal, Harris slammed his helmet into the ground as he sat on the bench.

On a day where SU’s defense wasn’t at its best and needed a strong offensive performance to preserve the defense and beat a winless Duke at home, Harris fell down short of the sticks. And Duke fell into its first win of the season in the Carrier Dome.

The post SU’s defense, stout through 3 games, allows 645 yards in 38-24 loss to Duke appeared first on The Daily Orange.