As Flings Owusu-Agyapong stood in the Maracanã in Rio de Janeiro for the 2016 Olympics opening ceremony, she felt nervous but couldn’t stop smiling. Owusu-Agyapong, chosen as Ghana’s flag bearer, waved a giant Ghanaian flag as a crowd of 75,000 spectators cheered.

Almost a decade earlier, sprinter Owusu-Agyapong ran track and field at Syracuse, setting three school records in the indoor 55- and 60-meter and outdoor 100-meter. Since her graduation in 2012, Owusu-Agyapong has acted as a volunteer assistant coach for the track program, mentoring sprinters while competing in track meets around the world. Despite many injury-related setbacks, she’s continued to compete for Ghana at several World Championships and African Games. As a member of Ghana’s women’s 4×100 squad, Owusu-Agyapong and her teammates hope to qualify for the Tokyo Olympics at the World Athletics Relays on May 1-2.

Owusu-Agyapong was born in Ghana and moved to Toronto when she was 9 years old. She had always enjoyed running with her family in Ghana but didn’t begin running competitively until after her sophomore year of high school.

At Syracuse, Owusu-Agyapong impressed even in her early years. She broke school indoor records in the 55-meter (7.00) and 60-meter as a sophomore, before improving upon her own 60-meter record as a junior (7.34).

Owusu-Agyapong qualified for her first outdoor NCAA Championships during her senior year and placed 20th in the 100-meter, earning honorable mention All-American honors. In her graduate season, she was a second-team All-American for the indoor season after winning the Big East title in the 60-meter. In the outdoor season, Owusu-Agyapong broke another school record in the 100-meter with a silver medal-winning performance at the Big East Championship.

“She’s got a ton of experience at this point and a ton of wisdom to share with younger athletes as they go through the inevitable ups-and-downs of a college career,” said Dave Hegland, Syracuse’s sprint and hurdles coach.

Despite nagging injuries to joints in her back, ankle, feet and more, Owusu-Agyapong has remained resilient in her fight back onto the track after being sidelined for stretches, said Frank Rizzo, an assistant coach for the Orange from 2012 to 2018.

Although many times she was limited in the training she could do due to injury, Owusu-Agyapong frequently did three sets a day of the exercises she was able to do. According to Rizzo, Owusu-Agyapong trained so hard after a back injury that she shaved a whole second off her 200-meter time.

In her training for the Rio Olympics, Owusu-Agyapong worked with Hegland and Rizzo every day. The coaching staff challenged her, making her run against male runners, hurdlers and sprinters. Two days a week, she worked on her acceleration, practicing block starts and running the first 30 or 50 meters of the race. Owusu-Agyapong’s acceleration was so strong that in Rizzo’s 5 1/2 years with the team, he never saw her lose a block start. She even bested Olympic medalists on several occasions.

Other days, Owusu-Agyapong would work on her finishing skills, doing circuits and interval training, as well as tempo runs. She also practiced horizontal jumping events, such as the long jump, triple jump and 10 bound.

“She’s an embodiment of that philosophy or that belief that you just have to put in steady work every day,” Hegland said.

In her prep for Rio, Owusu-Agyapong set new indoor national records in the 60-meter and 200-meter.

In addition to training in Syracuse, Owusu-Agyapong trained in Ghana with the rest of her relay team. After months of work, Ghana’s relay squad set a new national record to qualify for the Rio Olympics. Owusu-Agyapong was pivotal in the Ghana squad’s qualification despite leg injuries. 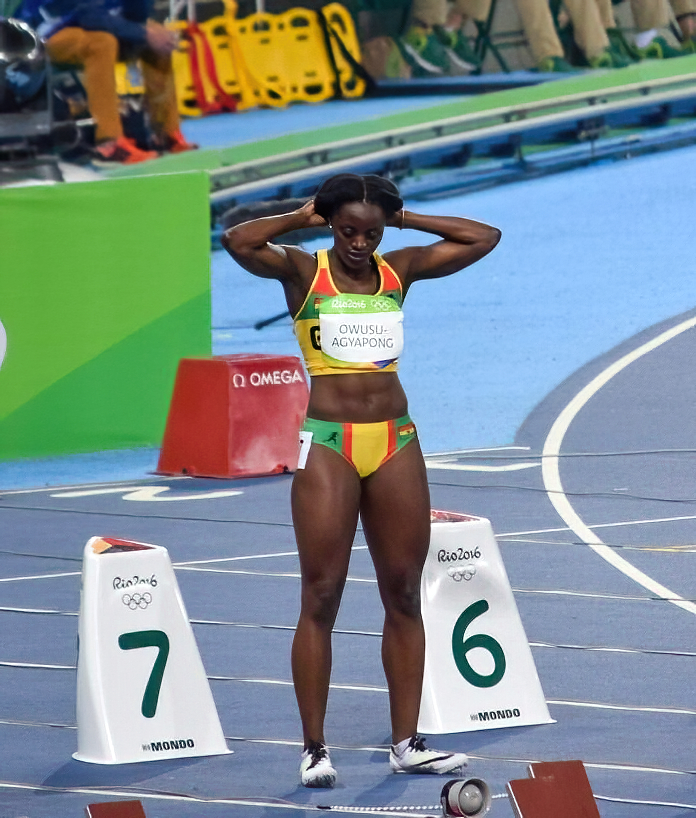 Owusu-Agyapong hopes to qualify for the 2020 Olympics in the 4×100 at the World Athletics Relays in May. Courtesy of Flings Owusu-Agyapong

“Getting there and really thinking about just the amount of work it took it was overwhelming,” Owusu-Agyapong said.

Eight days after Owusu-Agyapong carried the flag for the opening ceremony, she stepped to the line for the women’s 100-meter race.

“Going in, I stood at the line, and I thought I was going to be so nervous just because it’s the Olympics,” Owusu-Agyapong said. “I was looking around and then I was like ‘Wait, this is 100 meters. It’s what you run all the time.’”

Owusu-Agyapong finished fourth in her preliminary heat — 28th overall — and did not advance to the next round. Five days later, Owusu-Agyapong and the Ghanaian relay team competed in the 4×100, where they took last place in their heat — 14th overall.

Since the Rio Olympics, Owusu-Agyapong has dealt with more persistent injuries and has been unable to race in many individual events. Due to COVID-19, she had not individually competed since February 2020 before participating in Auburn’s War Eagle Invitational in April. She injured her foot midrace and was unable to finish. To qualify for the Tokyo Olympics individually, Owusu-Agyapong has until early July to participate in meets to reach the qualifying standard of 11.15 seconds for the women’s 100-meter.

This weekend, Ghana’s relay team has its best chance to qualify for the Tokyo Olympics at the World Athletics Relays in Poland. Sixteen relay squads are selected for the Olympics, and eight have already been chosen after their performance at the 2019 World Championships. The remaining eight teams can qualify based on world ranking or performance at the World Athletics Relays.

In what will likely be Owusu-Agyapong’s final Olympics, Ghana’s relay team has a good chance of qualifying for the Olympics, said Andrew Owusu, an executive member of the Ghana Athletics Association. According to Owusu, if they do not finish in the top eight of teams who have not already qualified, it will be very difficult to reach the standards needed for qualification.

Owusu-Agyapong received an MRI on Monday for her foot injury from April, but she is still planning on running in the World Athletics Relays this weekend.

“She’s probably the most diligent and most consistent athlete I’ve ever had in terms of running,” Rizzo said. “Some of those injuries just taught her to really, really focus on the details.”

The post SU record-holder Flings Owusu-Agyapong looks to make return to the Olympics appeared first on The Daily Orange.