After an attack by Boston College near the beginning of the second set, Lauren Hogan dove for the ball, popping it up high directly to Elena Karakasi for the set. Marina Markova wrongly tined her jump on the outside, but she tipped the ball hard over the net.

Three BC players all dove and missed as the ball landed in the middle of the court, Karakasi got her 10th assist of the game and Markova got her fourth kill. On the very next point, the same thing happened — only this time ending with a tip by Polina Shemanova.

In its last match of the fall season, Syracuse (4-4, 4-4 Atlantic Coast) fixed everything it did wrong earlier in the shortened season and played complete sets against Boston College (0-6, 0-6). The Orange combined for seven attack errors in the straight-set match, which was their only single-digit error game of the season. The routine plays SU continued to execute helped them outscore the Eagles 75-41 across the three sets.

“We know what we had to do to be (a) better team,” head coach Leonid Yelin said. “People had to prepare themselves better.”

At the beginning of the first set, Markova spiked a ball through a pair of BC blockers with such force that it echoed throughout the Women’s Building as it bounced off the court behind them. She led Syracuse with 14 kills, the third-most in her career and most in a match since her move to middle blocker last season. In a game where Shemanova only had four kills, her performance was crucial in securing a blowout in the last game of the season.

Shemanova’s kill total was her season-low and second-lowest in her career. This was the first time this season that she was not in the top three in kills for the Orange. Near the beginning of the second set, Shemanova attempted to attack the ball, but the ball went straight into a block. All of Syracuse’s players were pulled forward before the block, and no one was able to run back in time to recover the ball.

While Shemanova struggled, Markova, Ella Saada and Yuliia Yastrub made up for her absence, combining for 32 kills.

“Marina did a great job yesterday and today,” Saada said. “She helped us out a lot.”

Syracuse won the first set 25-12, their largest margin of victory — or defeat — up to that point this season. Boston College struggled, though, recording 10 attack errors, four of those thanks to blocks by the SU front line. Midway through the set, BC setter Sophia Lambros perfectly set up her outside hitter for an attack. But Markova and Karakasi perfectly timed a double block and sent the ball back to BC’s side of the court. The Eagles recovered, though Clare Naughton spiked the ball directly into another double block by Markova and Karakasi that was never dug.

Syracuse started the second set quickly, recording four straight points on a missed serve by BC and three consecutive kills by Markova, Shemanova and Saada.

When it was 15-5, Yelin took Shemanova out of the match for one of the first times this season. He subbed in Dana Gardner, who threw her mask on the bench and ran excitedly onto the court for her first appearance of the season. When she killed the ball to make it 18-7, the entire bench started cheering her name.

Yelin made several other substitutions in the set, playing Naomi Franco, Lauren Woodford, Berkley Hayes and Viktoriia Lokhmanchuk — who was wearing a knee brace. The Orange took the set 25-9, making it the first time in 2020 that they played a set where a team only scored single digits.

“We had this opportunity — the score allowed us to put in risk,” Yelin said. 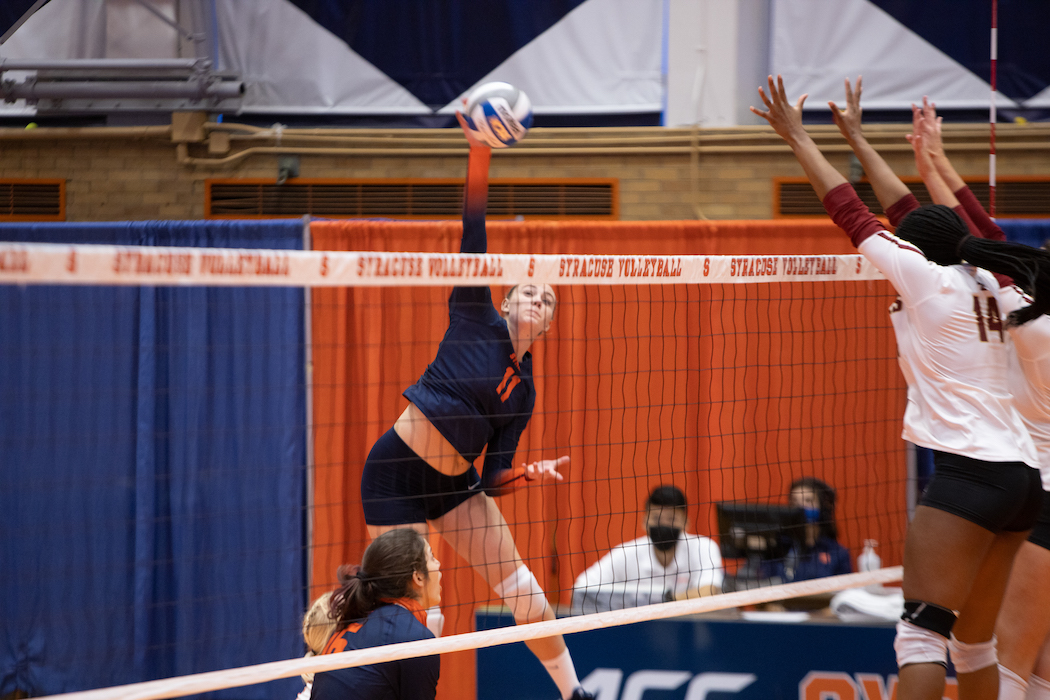 Polina Shemanova tallied just four kills for Syracuse against Boston College, which was her season-low and second-lowest in her career with the Orange. Sarah Lee | Asst. Photo Editor

The third set, however, wasn’t as dominant for SU. It scored the first point of the set, but BC quickly took its first lead of the match two points later when an attack by Shemanova was stuffed on the outside. After making 10 attack errors in the first set, BC managed to recover in later sets, making fewer mistakes and keeping the score close.

Despite not capitalizing on mistakes by BC, the Orange continued to make routine plays that kept them a few points ahead for most of the set. Saada especially shined during the set, recording six of her 13 kills in the final frame and coming forward as a strong attacker. Near the middle of the set, Saada attacked the ball from the back row, a move BC was not expecting. They recovered, but sent the ball over soft, allowing for Shemanova to make an easy kill.

When the set was tied at 15, Saada made three straight kills: a bullet to the back corner, an unexpected tip and a spike that a BC defender dove toward and missed. The Orange didn’t surrender their lead for the rest of the game, winning the set 25-20 and the match 3-0.

After the match, SU players huddled on the sidelines for the last time until at least spring, if not the last time this season. The NCAA has given volleyball teams approval to play in the spring, but the ACC has not made any plans to hold a spring season. And with SU currently in the middle of conference standings and a reduced tournament bracket, it’s not certain that they have any games left this season — even after back-to-back straight-set wins to close the fall schedule.

“(We) just hope that people are going to come back after Christmas break healthy,” Yelin said.

The post SU finishes fall season with 3-0 win against BC behind Markova’s 14 kills appeared first on The Daily Orange.