Calista Almer popped the first pitch from Keely Rochard to shallow left field, which dropped for her second hit of the series. Head coach Shannon Doepking signaled Angel Jasso to lay down a sacrifice bunt. She successfully sent it down the third-base line, and Cameron Fagan retired the freshman as Almer moved to second base.

Syracuse took until the fourth inning to reach scoring position in game one of Saturday’s doubleheader. On Sunday, Doepking used a new, small-ball approach in the series finale against No. 20 Virginia Tech. Syracuse’s next two batters ended the inning, but the Orange found more success reaching scoring position.

The next inning, Lailoni Mayfield’s hit went over the head of first baseman Jayme Bailey and landed softly into right field for the second leadoff single of the day in as many innings. Toni Martin, who started the season hot offensively but hasn’t hit a home run since April 6, showed bunt. On her third attempt, she laid a successful sacrifice bunt that advanced Mayfield to second base.

Syracuse (19-20, 11-17 Atlantic Coast) played small-ball to manufacture runs in its 8-1 loss on Sunday afternoon, though the approach ended with the same result as its first three blowout losses to Virginia Tech (32-12, 23-11). Syracuse scored just two total runs in the four-game weekend series. SU’s been outscored 93-16 against ranked teams this season.

“I thought it was our best chance,” Doepking said postgame. “If we were going to push something, it was going to have to be going to a bunt early and hoping that something kind of falls our way.”

SU currently lags behind teams such as Virginia Tech, Doepking’s said. She said the Orange’s hitters can’t handle the NCAA’s leader in strikeouts, Rochard. So she opted for an approach she thought would lead to more successful at-bats and more runs on the board.

The approach worked in part. SU recorded five hits, as many as it had in the three previous games. But once runners found themselves on base, hitters struck out.

“Unfortunately, when we had opportunities, we kind of reverted back to the strikeouts in the big moments when we had runners in scoring position to kind of change the dynamic of that game,” Doepking said.

In the bottom of the sixth inning, Neli Casares-Maher lined a shot to right field, where Cana Davis tried to make the diving play. The ball popped out of her glove when she hit the ground and trickled toward the right-field foul pole.

Casares-Maher hadn’t stopped running, and when she saw the ball jar loose, she broke for third and easily glided in for her first triple of the season. It was the only ball that reached the wall and SU’s only extra-base hit of the afternoon. On the next pitch, Gabby Teran hit a soft liner into right-center field, easily scoring Casares-Maher for the Orange’s second, and final, run of the weekend.

Syracuse kept the game close until the fourth inning. The team recorded two leadoff hits, advancing the runner into scoring position each time. But after Darby Trull smacked a two-run home run in the top of the fourth to extend the Hokies’ lead to four, Syracuse left three runners on base. 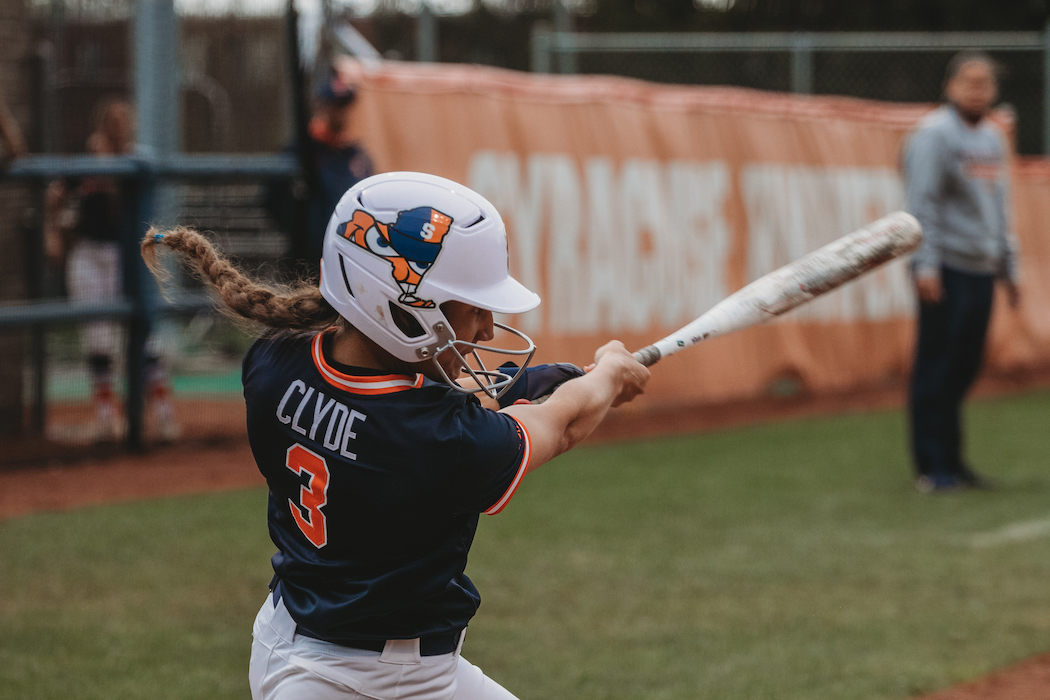 Rebecca Clyde was one of three SU hitters hitting below .200 in the Orange’s lineup on Sunday. Elizabeth Billman | Senior Staff Photographer

Rebecca Clyde was one of three Syracuse hitters in Doepking’s lineup who was hitting below .200. VT knew that, and it intentionally walked the batter before her, Geana Torres, with two outs and runners on second and third in the bottom of the fourth. Clyde hadn’t recorded a hit since April 23 against Virginia.

She quickly went down 0-2, making massive, fruitless cuts with each swing. Clyde struck out swinging, put her head down and slowly walked back to the dugout. The SU bench went silent, knowing their best opportunity to score on the ACC’s fourth-best team was squandered.

“I think the pitch selection you saw there was not good at all from Rebecca,” Doepking said. “I think that’s just a byproduct of a lot of emotions going.”

The game started to slip away from Syracuse. Fagan hit a home run to extend the lead further in the bottom of the fifth, and VT added another three runs over the ensuing two innings.

VT finished the game with Ivy Rosenberry, a freshman who hadn’t seen game action since April 23. Clyde led off the inning and swung so hard at an 0-1 pitch that her elbow guard came off. She struck out on three pitches, contrary to the strategy Doepking tried to employ on Sunday.

Rosenberry set down Paris Woods on a called third strike that barely caught the outside corner, bringing up Almer. The graduate student attempted to bunt to reach base for the second time. But instead, Fagan read the bunt easily and faded in. She gathered it and retired Almer at first, solidifying Virginia Tech’s sweep of Syracuse.

“If I had answers … I would’ve shown you the answers in any of these games,” Doepking said. “I think, unfortunately, we didn’t find answers for Keely Rochard. We just did not find answers in four games against that kid.”

The post Small ball philosophy proves unsuccessful in SU’s 8-1 loss to No. 20 Virginia Tech appeared first on The Daily Orange.