GREENSBORO, N.C. — Syracuse hadn’t led for 39 minutes and 58 seconds against Florida State. Then, down one point with seconds remaining, Maeva Djaldi-Tabdi dropped the ball. Kiara Lewis had just dished the senior center an inbound pass, but Djaldi-Tabdi fumbled it before shoveling it back to Lewis. Off balance, with a defender in her face, Lewis threw up a prayer from beyond the arc — time was running out, and voices were yelling at her to “shoot.” She did, but it was an airball.

Freshman Kamilla Cardoso snagged the loose ball and scored off the glass as time expired. The buzzer rang through Greensboro Coliseum, the backboard lit up neon red, and Cardoso’s game-winning, buzzer-beating putback sent Syracuse to the semifinal of the ACC tournament.

The bench emptied, Digna Strautmane embraced the 6-foot-7 center, and the rest of the mob followed. Cardoso bounced up and down, overjoyed.

The Orange had trailed by as many as 15 points. Cardoso said she had a bad game and hasn’t been playing well as of late. The freshman — and SU — was shaken when her roommate, Priscilla Williams, was stretchered off earlier in the first half after what appeared to be a head injury.

But at the buzzer, Cardoso delivered.

“That’s just a big-girl play,” head coach Quentin Hillsman said of the freshman. “She really grew up today … She hasn’t had great games lately, and she’s been a little frustrated with her play, but today she was big.”

Heading into Friday’s matchup, Syracuse had dug itself out of a 15-point deficit and won on two occasions this season. And against the higher ranked, No. 4-seeded Florida State (10-8, 9-8 Atlantic Coast), Syracuse (14-7, 10-7) did it again. The Orange overcame poor first-half shooting and a six-player rotation. They tied the game at 55 midway through the fourth quarter and won it at the buzzer via Cardoso.

“She didn’t give up on the play,” Hillsman said. “She had every reason to just say, ‘She missed the shot, game is over.’ (But) she stayed with it, got the rebound (and) put the ball back up on the glass.”

Syracuse is already a lock for the tournament, according to ESPN bracketologist Charlie Creme, but its come-from-behind quarterfinal win could boost the Orange’s seeding.

After a closer-than-comfortable win against No. 13 seed Boston College in the second round of the ACC tournament on Thursday, No. 5 seed Syracuse advanced to play Florida State a day later. Cardoso’s buzzer-beater saved the Orange’s ACC tournament hopes, but it wasn’t the only play made at the buzzer. 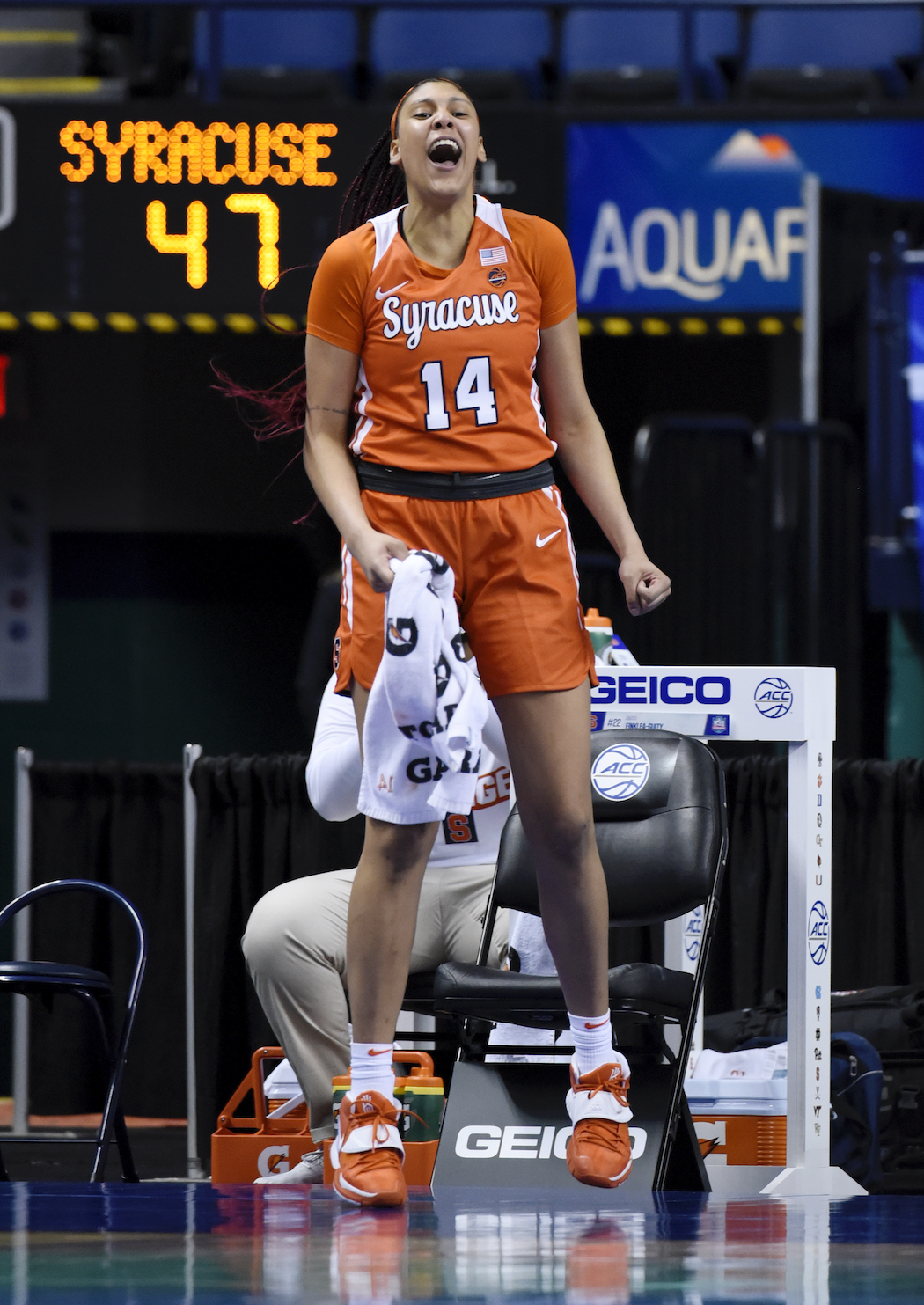 Down six in the final seconds of the third quarter, Lewis blocked Tiana England’s shot. She dished to Emily Engstler, and the junior forward took a couple long strides up the court before firing a halfcourt shot off one foot. It banked off the backboard and in, and Syracuse’s bench erupted as the buzzer for the end of the quarter sounded.

Postgame, Engstler said those are the kinds of shots that are “predominantly luck.” Hillsman said he got into the huddle and told his team “that’s game,” because he knew the game had shifted back in SU’s favor.

“We’ve been there, done that before, too,” Hillsman said. “We had all the momentum, and someone hit the shot that you think is impossible, and then everything starts to go their way.”

Hillsman was right. To open the fourth quarter, SU pulled down two offensive boards and Engstler sank a 3-pointer to tie the game at 55. Nearly 13 months prior, Engstler also converted an alley-oop at the buzzer to beat Florida State in overtime. The move was dubbed the “napkin play” after Hillsman revealed it was drawn up on an Outback Steakhouse napkin.

Friday night’s buzzer beater wasn’t as smooth. Hillsman drew up a go-screen to free up Lewis because he knew that FSU’s attention would logically be drawn toward Cardoso. Djaldi-Tabdi bobbled the ball because it got crowded, Hillsman said, and he thought Lewis’ effort would go in because it looked like the shot was straight.

Minutes before the final play, though, Florida State went on a 7-0 run to retake the lead. Bianca Jackson sank a 3-pointer and led all scorers with 25 points. The Syracuse bench expressed frustration as Cardoso fought through contact in the paint, demanding a foul call that eventually came. Djaldi-Tabdi bricked a 3-pointer from the left corner down seven with four minutes left, and FSU intercepted an ensuing pass in the paint toward Cardoso.

It looked like the Orange had reverted to their shooting struggles. Three weeks prior against FSU, Syracuse finished with more turnovers (18) against the Seminoles than made field goals (17), SU’s third-worst shooting performance of the year.

“We got to score the ball,” Quentin Hillsman said after Syracuse’s 67-52 loss. “We can’t shoot these percentages, shoot 30% and 17% from behind the arc, and win games. We can’t play that way.”

Friday afternoon in the first half, Syracuse’s poor shooting performance from Feb. 11 reappeared. The Orange trailed 9-0 after taking nearly five minutes to score their first bucket. Cardoso, Strautmane and Williams all missed open looks. Before her injury, Williams shot 0-of-5 from beyond the arc, including a sequence where she missed three consecutive 3-pointers from the same spot on the left side of the court. Williams finished 0-of-9 from the field.

For every hard-earned bucket that Syracuse converted by driving to the paint, Florida State responded.

But in the final minutes of the third quarter, Syracuse’s defense tightened up. It pulled within six after Djaldi-Tabdi did a move in the post for an easy two, and Amaya Finklea-Guity replicated that for another two. The Orange gave up two on the other end, but Strautmane sunk one of her three 3s.

Djaldi-Tabdi sank both free throws down inside the final two minutes to pull the game within three once again. She then sank a rare 3-pointer on the next possession, and FSU fouled on offense to turn the ball over.

“Maeva locked in today,” Engstler said. “She wasn’t messing around.”

Djaldi-Tabdi hit the rim on the next 3-pointer, and FSU dribbled the shot clock. Jackson drove, leading by one, but couldn’t convert the layup, and Hillsman called timeout with 15.9 seconds left on the clock. The play he drew up led to a Djaldi-Tabdi 3-pointer.

She bricked the effort off the front rim, but the 6-foot-7 Cardoso went up for the board. The freshman center was there to pull it down. “She told us the whole game. She was like, ‘rebound, rebound,’” Engstler said.

And 15 seconds later, as the final buzzer sounded, Cardoso was there once again.

The post ‘She really grew up today’: Cardoso’s buzzer-beater pushes Syracuse over FSU appeared first on The Daily Orange.