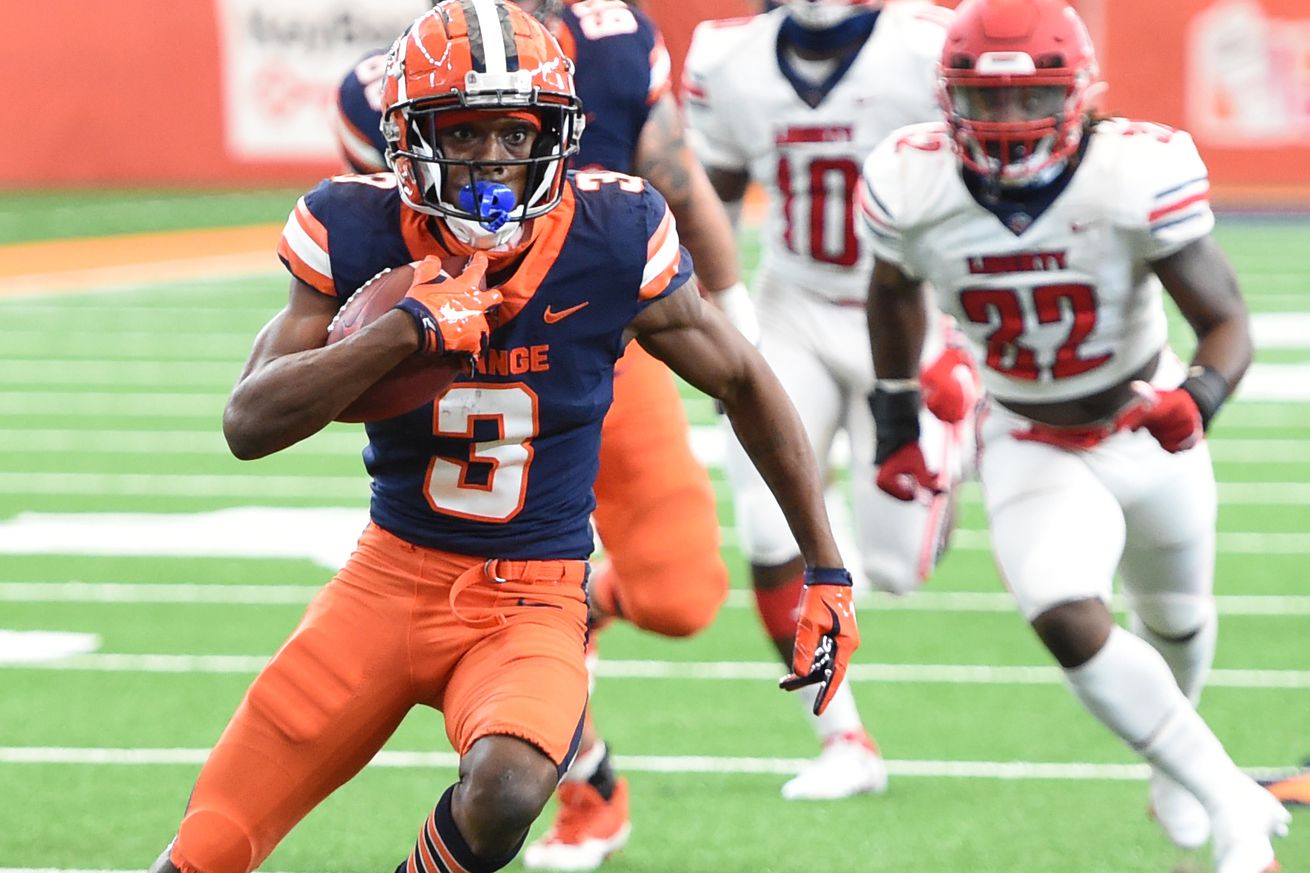 The leaky Orange run defense comes back to bite Syracuse

It all started so well for the Syracuse Orange. After SU and Liberty traded three-and-outs to start the game, a nine play, 61 yard drive was capped by a 17-yard touchdown pass from Rex Culpepper to Taj Harris. Syracuse took an early 7-0 lead and it seemed like fans could settle down.

Then Shedro Louis wasn’t touched for 75 yards on the very next drive to immediately tie the game.

That set the tone for the rest of the contest between Syracuse and Liberty, as the Orange’s run defense woes carried over from the Duke game. Liberty didn’t even need their top two rushers this season to trample over the Syracuse defense for 338 rushing yards. That’s all the Flames needed to defeat the Orange 38-21.

This marks the second week in a row that Syracuse has allowed over 300 yards on the ground. The Orange held its first two opponents to under 200 rushing yards, but ever since then the run defense has been a big issue that has been exposed in the 3-3-5 defense. Louis led the way for the Flames with 170 rushing yards and Peytton Pickett followed closely behind with 115 rushing yards.

It’s important to note that injuries can be looked at as a partial reason why the defense has continued to struggle. With no Andre Cisco, Eric Coley, and Steve Linton, among others, Syracuse is relying on many young and inexperienced players to fill in the gaps. Trill Williams was also unavailable for the first half of the game due to injury.

That being said, the injuries don’t excuse the tackling and positioning woes that we saw from the Syracuse defense. Multiple big gaps opened up in the defense where it seemed like Liberty’s running backs didn’t have to battle against Orange linebackers for extra yardage. The second and third levels of rush defense continued to struggle in providing support in stopping the run.

“We had trouble stopping the play up the middle,” said Babers. “That’s a play in their offense you have to stop.”

Some lazy tackles as well allowed Liberty ball carriers to break free for more yards. The Flames took advantage of many one-on-one matchups and open field opportunities to shed tackles from the Syracuse defense. Even with young players filling in on defense, the tackling fundamentals is an issue that can’t be ignored.

It’s important to note as well that Liberty didn’t need the passing game to beat Syracuse. Malik Willis did complete 80% of his passes but only threw for 182 yards. The main damage, much like Syracuse’s game against Duke, was done on the ground as the aerial influence seemed to be nullified.

Also keep in mind that Liberty’s leading rusher is Willis and he only gained 70 yards on the ground. Liberty’s second leading rusher, Joshua Mack, didn’t play against the Orange. The bulk of the damage was done by the third and fourth leading rushers for the Flames.

The defensive woes of Syracuse continue to rule the headlines, so it makes sense that the Orange offense went largely unnoticed. While it wasn’t a star performance from the offense in general, it was nothing like the offensive woes that we’ve seen from previous games. The play calling seemed to be much improved in order to adapt to Culpepper behind center.

Culpepper’s accuracy waxed and waned like the tide during the game. Some of his passes early on were bullets that found their intended targets. Others were both under and overthrown which led to stalled drives and turnovers. Culpepper still threw for 211 yards and three touchdowns, so his performance wasn’t too bad considering this was his first week consistently running with the ones.

The bright spot for the Orange continues to be Sean Tucker. He ran 21 times for 111 yards and has been a consistent factor and presence for Syracuse throughout 2020. Unfortunately, he was the only sign of a Syracuse running game with Cooper Lutz only gaining nine yards as the other running back who got carries.

There was some life from Syracuse’s forgotten unit as well: the tight ends. Aaron Hackett caught two balls and scored a touchdown while Luke Benson was targeted a few times as well. The playbook seems to be growing for the Orange, which can help develop more options for Culpepper.

In the end, Syracuse isn’t going to get anywhere in 2020 if the run defense can’t figure things out quickly. Unfortunately for the Orange, it doesn’t promise to get better next week as Travis Etienne is set to welcome Syracuse to Death Valley.

“If you thought it was difficult this week [to tackle people], wait until next week,” says Babers.