Syracuse went home this week after losing 2-1 against Maryland this Sunday, ending its season.

In its 2021 campaign, featuring a two-way goalie battle at the start, a historic nine-game winning streak throughout and second-round exits in the Atlantic Coast Conference and NCAA Tournaments at the end, Syracuse (14-6, 4-2 Atlantic Coast) finished as a top-10 team nationally. The Orange had a volatile strategy, one that head coach Ange Bradley said disappointed her during the season because of her team’s high-shot count — even though it averaged 3.30 goals per game.

As the Orange look toward their next season, here are the stats that stick out from 2021:

Syracuse never had a steady starting goalie in 2020. Syd Taylor started in the fall, and Emily Streib started in the spring. Going into 2021, both Taylor and Streib left the team, and Syracuse was left with a hole in its cage. To test out a new class of goalies, Bradley threw in two freshmen — Brooke Borzymowski and Louise Pert. Borzymowski won the spot, and the freshman cemented herself as one of Syracuse’s best last lines of defense in years. 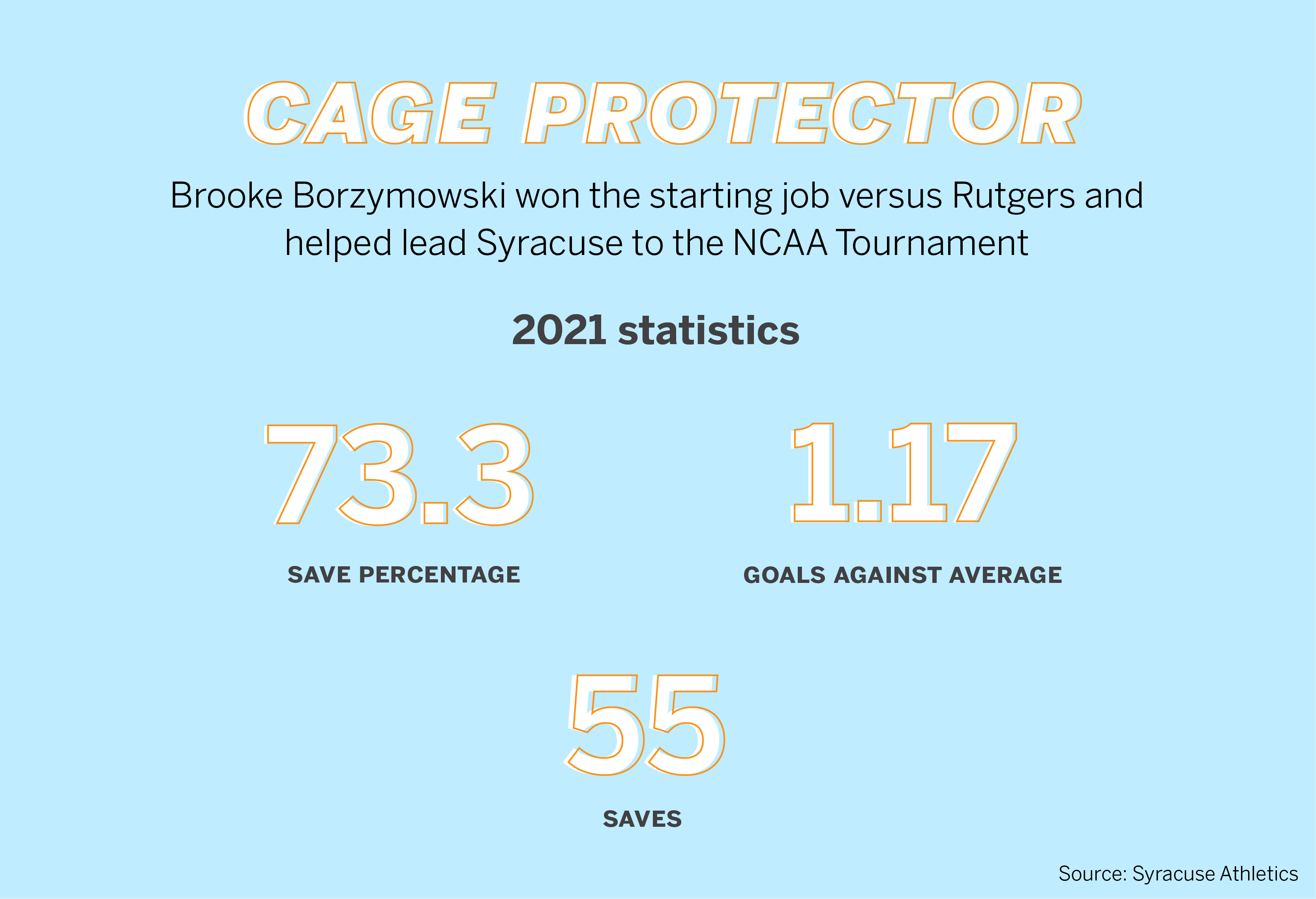 Borzymowski’s career as a full-time starter began against the eventual No. 1 team in the country, Rutgers, when the freshman posted 11 saves. Syracuse lost to the Scarlet Knights in double overtime, but Bradley kept Borzymowski in the cage against then-No. 3 Boston College the following week. Borzymowski only allowed one goal and played every game afterward.

By the time SU lost to Maryland — where she gave up two goals — Borzymowski’s GAA put her as one of the top-10 goalies in the country. She also posted five shutouts, including one against then-No. 5 UNC. Going into the 2022 season, with four postseason games already under her belt, the question now is if she can keep improving.

This season, Syracuse earned 146 corners. That’s more corners than SU has earned in the past seven years, and more than the 2015 team that won the NCAA title.

The Orange gained a record amount of corners and led the ACC in the category, but they still struggled on converting their attempts. With an average of 7.56 corners per game, Syracuse was eighth in the country at drawing corners, but it just mattered when SU could connect on them.

Against teams like Duke, Syracuse capitalized on four out of five, but the next game, it went 1-11 against UNC. SU’s corner formation changed closer to the postseason, Bradley said, but Syracuse’s setup normally looked the same: SJ Quigley would insert the ball, Tess Queen would set it, and Eefke van den Nieuwenhof shot it. If not, Hailey Bitters or another forward would redirect the shot, or Quigley would sometimes swoop in for the rebound.

Many of van den Nieuwenhof’s team-leading 11 goals came off corners. Quigley has served as Syracuse’s primary insert passer throughout her time at SU and racked up 13 assists mainly off corners. Van den Nieuwenhof is just a sophomore, but both Quigley and Queen have only one year of eligibility left. As Syracuse enters next year, Bradley will have to start testing out new options.

When Charlotte de Vries arrived at Syracuse in 2019, she led the team with 15 goals. The two closest behind her were Claire Cooke and Sarah Luby, two midfielders, who had only four goals each.

Two years later, with de Vries back into a midfielder position instead of forward, Syracuse recruited more offensive-minded players and had a surge in goal production this year. Six SU players scored five or more goals and more this season, while in 2020, only Pleun Lammers and de Vries recorded that many. 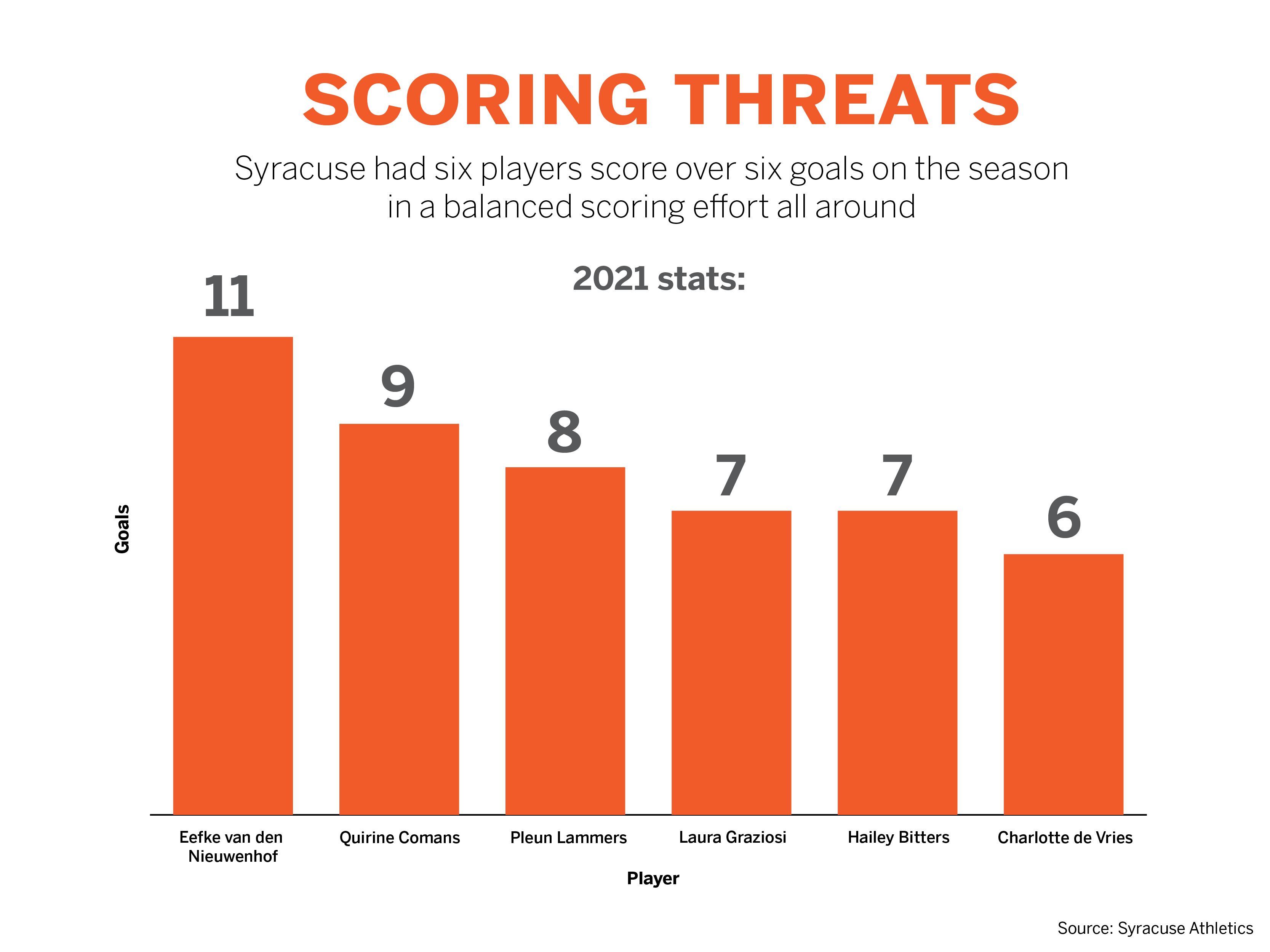 During high-scoring games such as its Oct. 31 match against Cornell, Syracuse shared scoring opportunities. In the 6-0 shutout, Quirine Comans and van den Nieuwenhof both scored two goals each, defender Laura Graziosi notched one, and Olivia Bell scored her first of the season.

The Orange may have shot a low efficiency this season, peppering 17.7 shots per game at the net with an average of 3.30 goals. But with a strong back line and the addition of van den Nieuwenhof, SU’s leading scorer, it finished with a 14-6 record.

Syracuse may not have climbed back to its championship peak in 2015, but during the season it scored enough goals together to beat higher-ranked teams and record a nine-game win streak. During the regular season, Bradley said the growth came from her players maturing over the last few years.

“If you look at our record last year, we were 8-8 (in) only ACC play and (had) a ton of freshmen,” Bradley said after Syracuse’s 2-1 win over Wake Forest. “We’re right there.”

The post Reviewing the stats of Syracuse field hockey’s 2021 season appeared first on The Daily Orange.