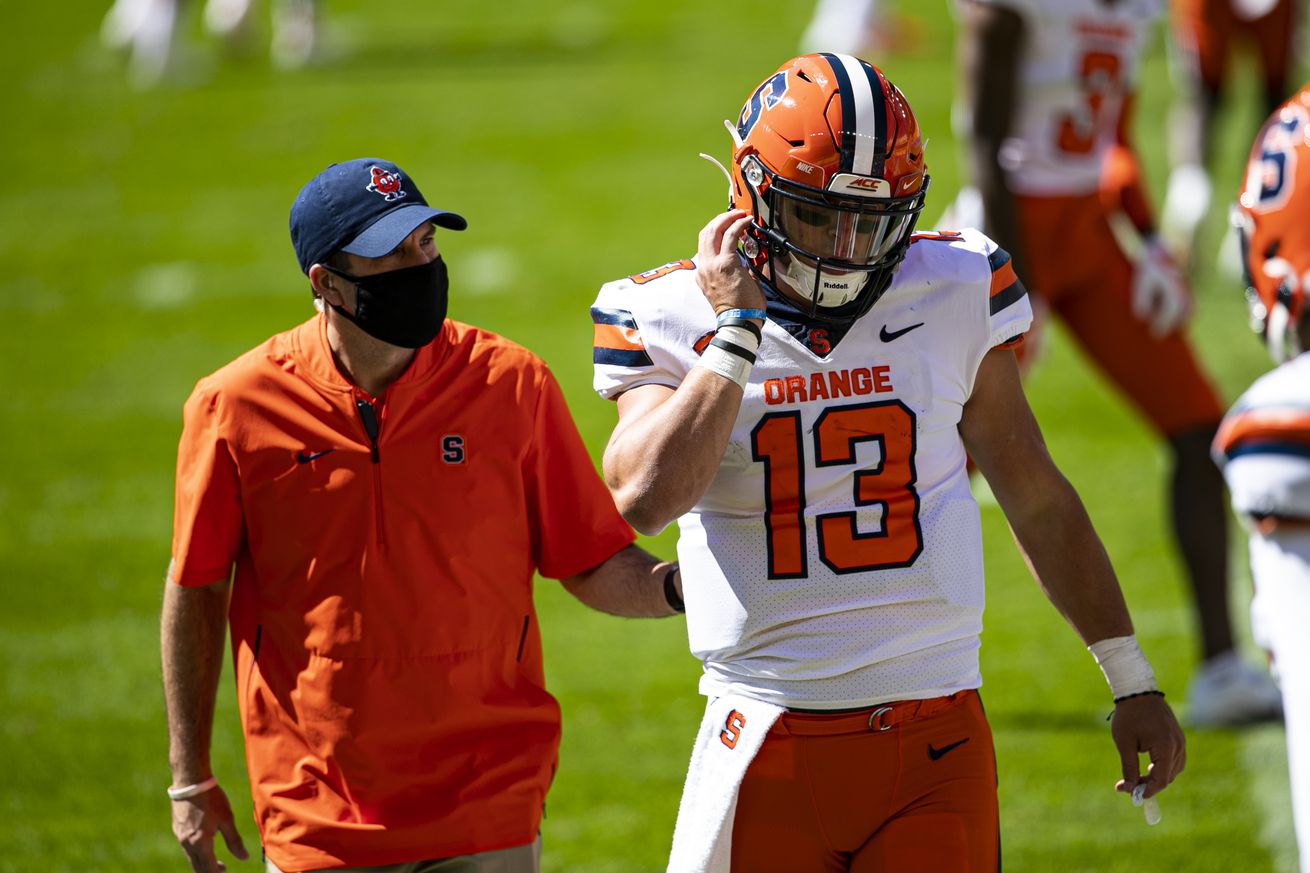 The Orange must work around yet another big injury

Most fans feared the worst after Syracuse Orange quarterback Tommy DeVito left SU’s game against Duke in the fourth quarter with an apparent lower-left leg injury. The New Jersey native was spotted returning to the sidelines on crutches and in a boot. On Saturday night, it seems that the worst-case scenario is upon Dino Babers and the Orange, as sources tell 247sports’s Stephen Bailey.

After injuries limited DeVito’s predecessor Eric Dungey throughout his career, Syracuse’s current primary signal caller has remained for the most part healthy despite taking quite a few sacks and hits. Unfortunately for DeVito, it seems like the sack he took in the fourth quarter on Saturday could be season-ending, which would not bode well for an Orange offense that seemed to take a slight step backwards against the Blue Devils.

Syracuse is already limited depth-wise at other offensive positions, not just at quarterback. The Orange is down to their fourth-string and possibly fifth-string running with Sean Tucker, who may have been hurt in the second half against Duke. The wide receiver corps is young and inexperienced and the offensive line has been hit with numerous injuries and other issues that limited their depth.

The lack of depth at quarterback is even more apparent, with DeVito’s backup in Rex Culpepper being the only signal caller with any collegiate experience. The other quarterbacks on the roster in David Summers, Dillon Markiewicz, JaCobian Morgan, and Luke MacPhail are all either freshmen or redshirt freshmen and haven’t taken a single competitive collegiate snap.

Unfortunately, Culpepper’s numbers this season haven’t been too impressive. Take away his 69-yard touchdown pass to Taj Harris against Pitt and the Florida native has gone 7-of-18 for 44 yards and one interception. While Culpepper has demonstrated a better ability to scan and read the field quickly, his accuracy has been all over the place.

Despite what some fans might think about DeVito’s performance so far in 2020, it’s clear that he is Syracuse’s best option at quarterback. With him potentially out for the season, that throws a big wrench in a Syracuse offense that is looking for its trademark speed and tempo that made the Dino Babers offense so attractive and effective in the first place.

Now it seems like the Orange must quickly shift gears and practice with Culpepper as its primary quarterback for the rest of the 2020 season which all of a sudden appears to not have many easy games left.