When the ball popped out of Cooper Lutz’s hands with just under 3:00 remaining and Syracuse trailing by a touchdown, it seemed like the Orange sealed their own fate. They had forfeited a double-digit first-half lead against a top-25 team. They had responded, only for it to be in vain.

But backed up at their own 9-yard line, SU got a “redo,” as Courtney Jackson called it, where Garrett Shrader and Sean Tucker engineered a 91-yard game-tying drive to force overtime. Time and time again, Shrader looked to throw deep but instead elected to tuck it and run. Shrader scrambled up the middle for 12, then again for 8, then again for 10 — all while the clock was winding.

With under 30 seconds, he dumped off a short pass to Tucker as he was hit. SU’s star running back did the rest, bouncing off a tackle for a 28-yard touchdown. Syracuse didn’t want overtime, head coach Dino Babers said after the game. It lined up for the two-point conversion and the win but was missing what Babers said was a “sense of urgency” and was flagged for delay of game. Shrader took responsibility for not paying attention to the play clock.

In overtime, after SU settled for a field goal, A.T. Perry secured a 22-yard touchdown catch to win the game.

Saturday, Syracuse was without two of its six offensive linemen, Darius Tisdale and Chris Bleich. It lost a third during the game. The Orange were also playing backup running back Abdul Adams, defensive backs Neil Nunn and Ja’Had Carter, among others. They lost No. 1 starting wide Taj Harris to the transfer portal in the past week, too. Still, they showed resilience.

“This team is not like last year’s team, even though we’ve got people missing. Last year was something totally different,” Babers said after SU’s loss to Florida State last week.

Against No. 19 Wake Forest (6-0, 4-0 ACC), Syracuse proved that — and then some. The Orange (3-3, 0-2 Atlantic Coast) had a double-digit lead through the second quarter and finished with a season high in rushing yards (354). Shrader topped 100 yards on the ground in the first half alone. Tucker added his fourth straight 100-yard rushing game. But the Demon Deacons hung around, putting up 17 points in a very average first-half performance. Then in overtime, they extinguished Syracuse’s chances of its first ranked win since the 2018 Camping World Bowl in a 40-37 loss.

“One thing that I’m really excited about is we got a football team,” Babers said. “We’re disappointed about the loss, but if you think about the way that they played the last three games, they’re playing together, they’re staying together, and they don’t care who gets the credit.” 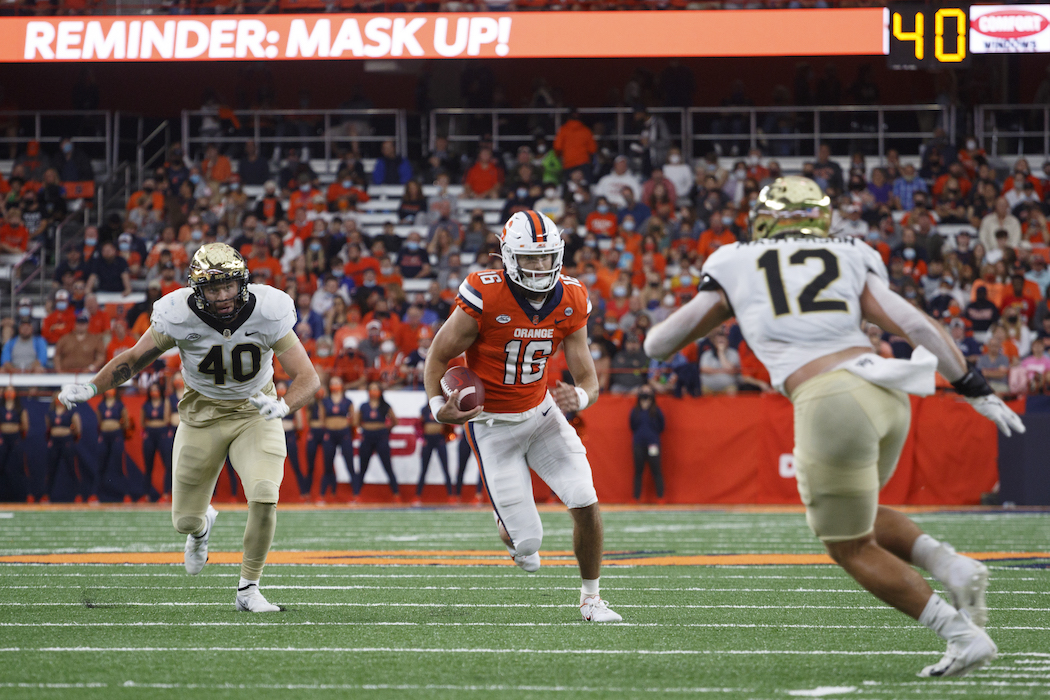 Tucker broke loose on back-to-back plays in the fourth quarter to set up a field goal on fourth-and-1. Babers elected to attempt the 45-yard field goal, a decision that many fans expressed disapproval of on Twitter since SU’s offense averaged over six yards per carry. Shrader agreed with the decision and said, “I wanted to go for it pretty bad.” But Andre Szmyt missed wide left, and things didn’t get easier for the Orange, who turned back to their ground-and-pound offense for a lengthy, game-tying drive.

This season, the Orange have had scoreless first quarters against Rutgers, Liberty and Florida State. But on the opening drive against Wake Forest, the best opponent SU has faced this year, the offense marched downfield, going nine plays and 78 yards for the touchdown.

The drive started with a dump-off pass to Jackson that he turned into a 21-yard gain by cutting up the middle of the field. It continued with the read option from Shrader, including 7, 9 and 11-yard scrambles. Tucker capped it off with a 6-yard run after tight end Maximilian Mang sprung him with a strong block.

“He definitely made a lot of good reads, definitely helped me a lot, opened up some holes,” Tucker said.

SU looked like it was about to spark another touchdown drive on its second possession, but it sputtered out when Shrader missed two throws over the middle targeting Devaughn Cooper. The Orange rounded out their first quarter — which featured 147 total yards of offense to Wake Forest’s 74 — with runs from Shrader and Tucker. The duo combined for over 100 yards on the ground in the first quarter.

And to open the second quarter, the Orange continued right where they left off. Tucker ran up the gut to move the chains, and then Shrader delivered a 24-yard touchdown throw to a wide-open Anthony Queeley. The completion put SU up 14-3 and marked just Shrader’s second completion of 20+ yards during his time as SU’s starter.

“Scoring 30-something points … I think we had our biggest offensive day,” Babers said. “I’m not too mad (about that).”

In the first half, Syracuse’s offense was rolling. On the other side of the ball, the Demon Deacons weren’t. Quarterback Sam Hartman threw a pass just a touch too low for his receiver on WF’s opening drive, and the Demon Deacons had to settle for a field goal. He missed multiple other semi-routine throws, by his standard.

But quietly, the Demon Deacons hung around. Hartman hit Perry on a 46-yard deep shot when Jason Simmons got burned in one-on-one coverage.

Simmons was beaten earlier in the first half too but atoned for his mistakes when Hartman threw an ill-advised deep ball into triple coverage that the defensive back snagged after his teammate tipped it.

This team is not like last year’s team, even though we’ve got people missing, last year was something totally different.

At the end of the half, Wake Forest false-started on third-and-8 and then was called for a hold after failing to convert. Babers accepted the penalty instead of bringing up fourth-and-13. He explained he’d watched WF kicker Nick Sciba hit from as far as 58 yards during warmups and didn’t want to concede three points.

But on the replay, a third-and-23, the Demon Deacons completed over the middle for a 25-yard gain and went on to score later that drive. Mikel Jones said SU’s players were in position, but WF just made a good play.

“Even with the third-and-23, we had a guy right there, but we didn’t make the play,” Babers said, standing by his decision.

Coming out of halftime, Syracuse’s offense started slowly, almost as if the first half momentum evaporated. But it was revived when Tucker broke loose for an 18-yard gain. Then Shrader found Jackson for a 29-yard catch on the sideline. SU’s star running back capped the drive off with a touchdown when Shrader elected — at the last second — to hand the ball off instead of keeping it himself on a read-option play call. Tucker sprung through a wide-open hole for the touchdown, regifting SU the lead, 27-26.

Shrader wasn’t perfect on Saturday. He tried to run on one third-quarter carry but could only duck his head and go down on the ensuing possession. His deep ball moments later missed Queeley by multiple yards, something Babers said he wished SU had connected more frequently.

And on the game’s final drive of regulation, he relied largely on his legs to lead SU the length of the field. Earlier in the game, ESPN’s broadcasters called him a “magician.” But in overtime, the magic ran out, SU had to kick a field goal, and Hartman’s shot to Perry in the corner of the end zone won the game.