In 2003, Neel Bhattacharjee was working on a Ph.D. in geography at Arizona State. He had played goalkeeper for ASU’s club soccer team, and a friend asked if he would be willing to coach a high school player.

Bhattacharjee enjoyed the experience and began coaching high school players, club team players and the U21 United States women’s national team on nights and weekends while also working a full-time day job. After stints as an assistant for the women’s soccer programs at George Washington, Boston College and Syracuse, Bhattacharjee was appointed as Binghamton’s women’s soccer head coach for the 2016 season.

But when Bhattacharjee arrived on campus in 2016, the Bearcats had been a Division I program for just 15 years. During that time, the team had just three seasons with a winning conference record. The year before, they finished last in the America East Conference.

Now in his sixth season, Bhattacharjee has already overseen three seasons with a winning conference record, won a regular season title and appeared in the conference championship game last season. Since taking the job, he has emphasized getting to know his players off the field and forming team chemistry.

After three-year stints at both George Washington and Boston College — where he helped the latter reach the College Cup semifinals — Bhattacharjee moved to Syracuse. From 2012 to 2016, he served as SU’s recruiting coordinator and also assisted with goalkeeper training. In SU’s first year in the Atlantic Coast Conference, Bhattacharjee’s recruiting class was ranked among the top 20 in the nation by Top Drawer Soccer.

At Syracuse, Bhattacharjee received more freedom than he had received at previous assistant coaching gigs. At times during the year when then-head coach Phil Wheddon was away from Syracuse working for the U.S. youth national team, Bhattacharjee ran five to seven sessions in a row with the team to gain valuable coaching experience.

“I certainly felt like I was prepped and ready to take that jump (to Binghamton), and Syracuse played a huge role in that,” Bhattacharjee said.

When the head coach vacancy opened at Binghamton following the 2015 season, Bhattacharjee expressed interest and reached out to Binghamton’s men’s soccer head coach Paul Marco, who he had previously met at a United Soccer Coaches coaching course.

What Bhattacharjee didn’t know when he reached out was that Marco had already planned to recommend him for the job. In his interview, Bhattacharjee laid out his plans for every facet of the job, and once he got it, he immediately began installing his plans for what Marco calls the “three teams” — the incoming team, the current team and the outgoing team. Bhattacharjee also brought in Jackie Firenze — whom he coached for all four years at Syracuse — as an assistant. 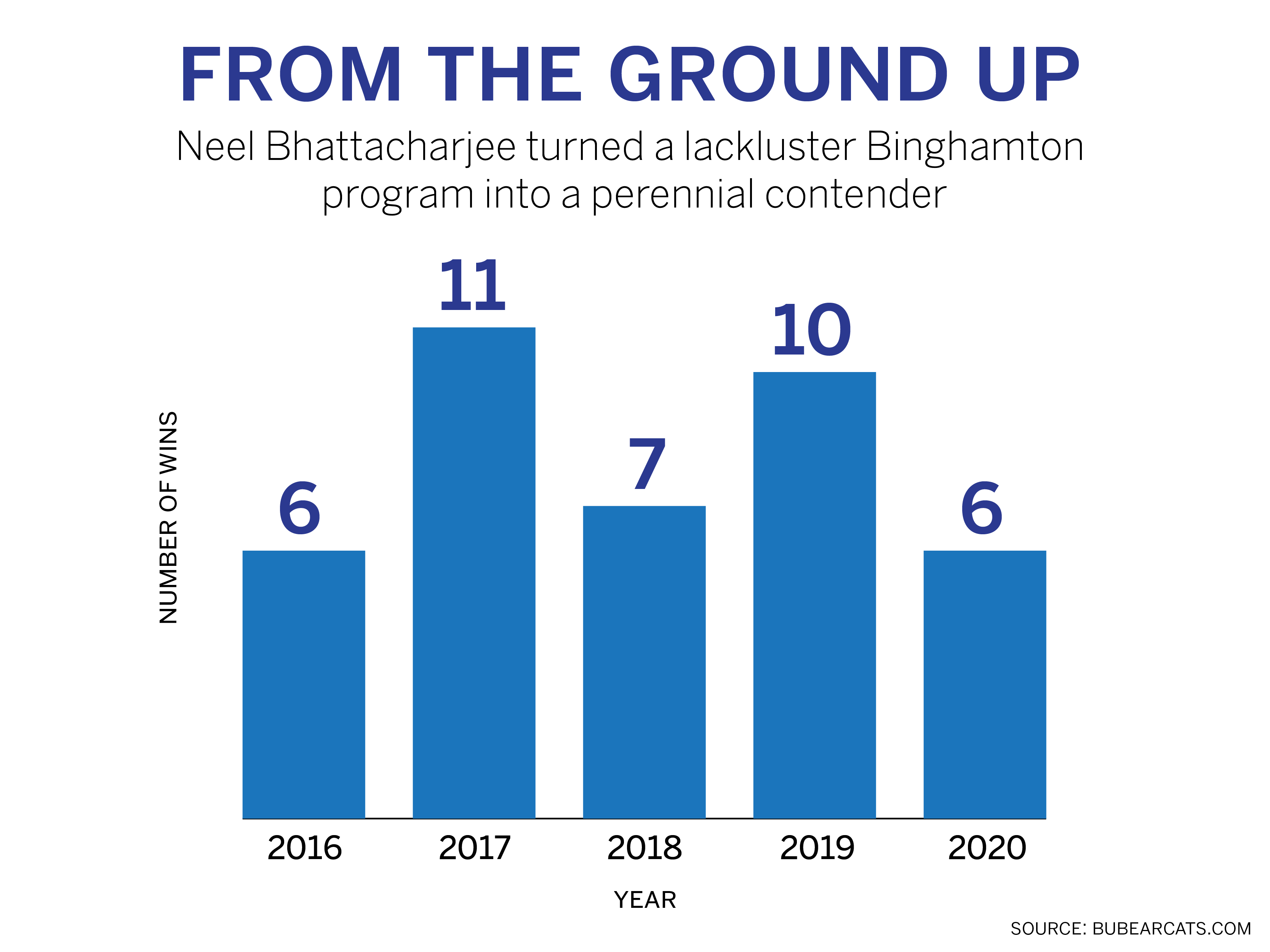 When Bhattacharjee started at Binghamton, he focused on forming relationships with players off the field, a skill he honed while at Syracuse, Firenze said.

“When moments are tough, that’s how you get players who really want to run through a brick wall for you because you know who they are as people and they know who you are,” Firenze said. “I think that’s something that (Bhattacharjee) does exceptionally well.”

The Bearcats struggled in Bhattacharjee’s first season, but they doubled their win total from 2015 with six wins. Although the team missed out the America East postseason tournament, Bhattacharjee was patient.

In 2017, Binghamton shocked the America East, winning the regular season title for just the second time in school history. Bhattacharjee and his staff were honored with America East’s Co-Coaching Staff of the Year.

But in 2018, the Bearcats hit unprecedented difficulties. Division between upperclassmen and underclassmen and arguments at practice led to poor team chemistry, and the team missed the playoffs after being the No. 1 seed the year before.

“It really spiralled out of control,” goalkeeper Haylee Poltorak said.

Bhattacharjee felt as though his work in helping team chemistry wasn’t working, so he turned to external sources for help. He enlisted the services of Nadine Mastroleo, a psychology professor, and Shelley Dionne, a management professor and the associate director for Binghamton’s Center for Leadership Studies. Mastroleo had previously worked with three other sports teams at Binghamton on communication and leadership training.

In the spring semester after the 2018 season, Mastroleo and Dionne met every other week with the team without the coaching staff present. They tried to identify goals and subgoals that players identified with. They also broke down aspects of gameplay, like how players responded to each other’s feedback on the field.

The team embraced the workshops and took them very seriously, Poltorak said.

“It was crazy to watch the transformation in their leadership in such a quick, short period of time,” Mastroleo said.

Poltorak and Mastroleo both commended Bhattacharjee’s awareness to see he wasn’t the best person to solve his team’s chemistry issues. College coaches, especially at the Division I level, often don’t ask for help because they think they know their team better than any outsider could, Mastroleo said.

“In doing that, he allowed himself to accept that he wasn’t perfect at something,” Mastroleo said. “That to me is a sign of somebody who is going to be an exceptionally successful head coach.”

In 2019, after the workshop concluded, the Bearcats went 10-6-2 and returned to the postseason. Eight different Binghamton players won America East weekly honors, a conference record. In 2020, the Bearcats tied for first in their division and played in Bhattacharjee’s first America East championship game.

This year, Binghamton sits second in the conference nearly halfway through its conference schedule. Poltorak and Marco credit much of the team’s adaptability to Bhattacharjee’s knowledge of the team’s players, both on and off the field.

“I have a young daughter who likes to play soccer,” Marco said. “I would be happy if she got to play for a coach like (Bhattacharjee).”

The post Neel Bhattacharjee’s creative freedom at Syracuse led to success at Binghamton appeared first on The Daily Orange.