By early October 2019, Syracuse was desperate. Without All-American Santita Ebangwese and Amber Witherspoon, who had the eighth-most blocks per set in the nation the season prior, Syracuse lost 73% of its blocking production to graduation and ranked 320th nationally in total blocks.

An 0-4 start was followed by three losses in SU’s first four Atlantic Coast Conference games, and head coach Leonid Yelin knew strengthening the middle was necessary. Looking externally for a middle blocker was no longer an option, so he turned within the program. Outside hitter Marina Markova was his answer.

“Out of the question, she was the one,” Yelin said.

Now a sophomore, Markova has filled the Orange’s (2-4, 2-4 Atlantic Coast) middle blocker role, which she shares with captains Yuliia Yastrub and Abby Casiano. Last season, Markova recorded 19 blocks during her first three games in the position, as well as 133 kills through 13 games. Her transition into an entirely new position was seamless, multiple teammates said. She averaged the second-most service aces per set in the ACC.

But Markova’s best move — her slide set, in which the hitter attacks the ball off a one-footed leap — flourished in the middle and helped propel SU’s offense.

In her first appearance as a middle blocker, a match against Duke on Oct. 6 of last year, Markova recorded the second-most blocks of any SU player in 2019. Though Syracuse went on to lose 17-15 in the fifth set, Markova notched three crucial kills in the final frame and combined with Yastrub and Ella Saada for two blocks. Her natural hitting abilities earned her 13 kills, even though she had barely practiced with a setter in the middle, Yelin said.

“If I didn’t know her, I would never feel this (was) her first time (in the middle),” Yelin said postgame.

But a week and a half after the Duke game, Markova suffered a season-ending injury when she broke her right index finger at practice — her first-ever major injury, she said. For the remainder of the season, she spent almost entire practices hitting against the wall on the sideline to maintain her form and technique. 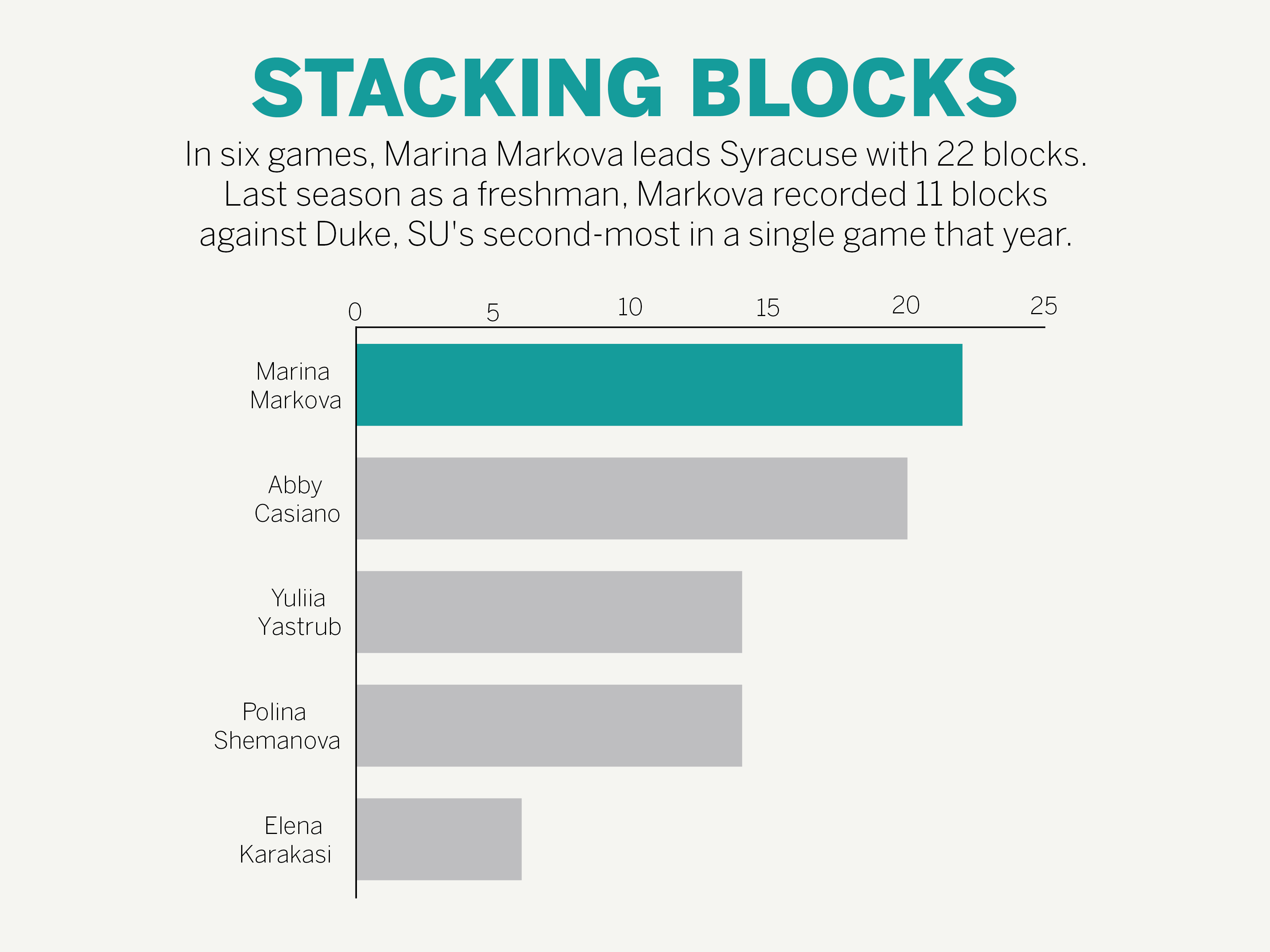 Initially, though, Markova was skeptical about the position shift. Back home in St. Petersburg, Russia, she had played middle a little bit, but the experience was frustrating. In a three-set match, her setter would only direct the ball her way two or three times, leaving her “running (out) there, screaming” for the ball without success. In American volleyball, it’s more common to set a middle blocker than in Europe, Yelin said.

Yelin didn’t want Markova to feel like he was “twisting her arm” — he wanted her to willingly change positions. And after she completed a few reps with setter Elena Karakasi ahead of the Duke game, notching kills from the middle of the court as opposed to her usual right side, Markova felt more comfortable in the new spot.

With surefire starters Polina Shemanova and Saada filling both outside hitter positions, moving then-freshman Markova to middle also allowed Yelin to capitalize on her talent immediately, guaranteeing that it wouldn’t be wasted. 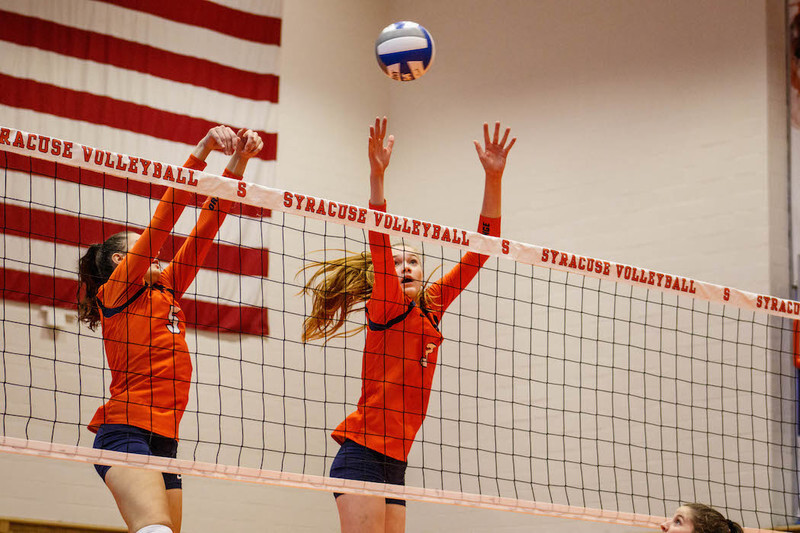 “I’m super proud of her because she doesn’t complain,” Casiano said. “You don’t hear her whining like ‘Agh, I just want to play outside, this is so stupid,’ like, none of that. She does her job, and she does it well.”

Like Ebangwese, Syracuse’s All-American middle blocker from 2018, Markova’s speciality is her slide play. It’s “the forte” of the position, said Casiano, a middle blocker. Yelin couldn’t believe how smoothly Markova executed the move during the Duke game.

On a slide, Markova started behind the setter and took a few long strides before quickening and jumping off one foot, striking the ball at its apex. A lot of people can replicate that sequence jumping off two feet, Yelin said, but doing it off one foot separates Markova.

“It’s such a weird footwork, so once she started getting that down, it just kind of came naturally with the arm swing,” Casiano said. “It’s so beautiful to watch.”

In the air, Markova looked up and assessed where her opposing blockers were. Her 6-foot-5 frame means she’s good at hitting over blockers, said Karakasi, her setter. But jumping high enough is still crucial, and it’s something Markova is focusing on. She’s also working on improving her timing and communication because Karakasi can’t see when Markova begins her run-up from behind.

“You have to feel (her), and she has to feel you too,” Markova said.

And when Markova heads back to the endline to serve, opponents can expect an aggressive, powerful shot that is hard to return, Yelin and Shemanova said. Her height allows the ball to rise and fall more, too, former libero Aliah Bowllan said. Markova’s still working on choosing the right moments to take bigger risks — such as hitting full power — and when to dial it back. Yelin’s hand signals from the sideline help with that, Shemanova said.

Serving is largely psychological, multiple SU players said, and building up energy and confidence is key for Markova. Starting at middle-school-age, Markova’s team played games against Shemanova’s in Russia; the two also played together on a team that represented St. Petersburg in the Russian Championship. Markova’s serve has always separated her, Shemanova said, and her 22 service aces in 13 games last season and six this season are a good indication that she’s continuing to develop.

“Her serve is getting better and better,” Shemanova said. “I hate it now, and I hated it six years ago.” 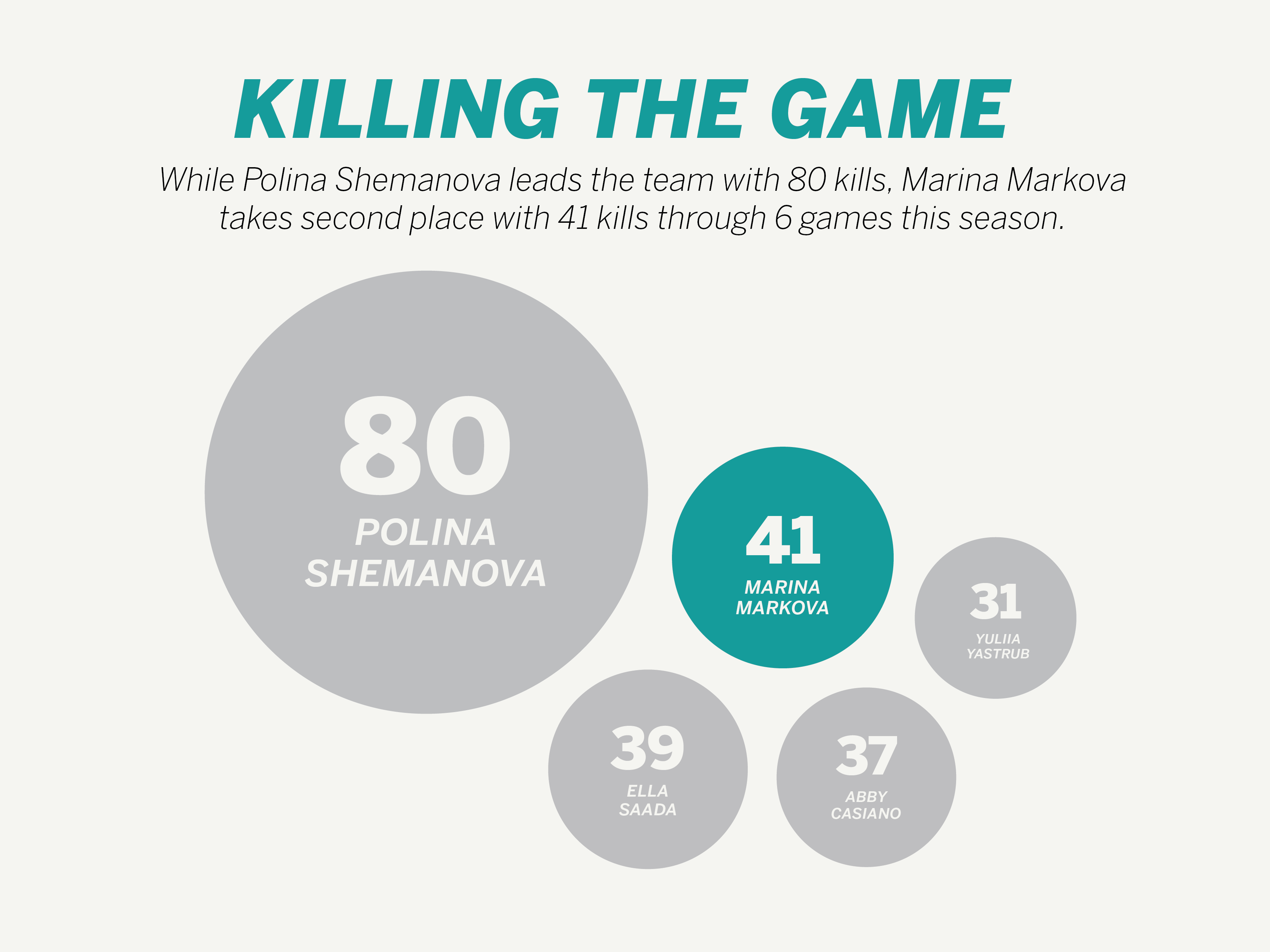 A year ago, against Duke, Markova showed her versatility when she was thrust into the lineup for her first college start at middle blocker. Her transition still isn’t complete, and she’s continued to develop aspects of her game through 22 blocks and 41 kills so far this season. But she showed that day she could adapt.

Postgame, in a sideroom adjacent to the Women’s Building court, Yelin reflected on his newest middle blocker’s performance.

The post Marina Markova’s move to the middle is like she’s been there ‘all her life’ appeared first on The Daily Orange.