Pleun Lammers scored two goals before halftime in Syracuse’s season opener against Sacred Heart. In the fourth quarter, Lammers had a clear opportunity to shoot, but she instead squared the ball to Tess Queen and assisted her second goal of the day. Lammers went on to notch a third goal with four seconds left in the game, completing the hat trick.

Now five games into the season, Lammers leads SU in scoring with eleven points and five goals. The Netherlands native has already reached her goal total from last season, earning All-Atlantic Coast Conference Player of the Week recognition in the process. This year, Lammers is a key part of Syracuse’s offense along with Charlotte de Vries. De Vries has scored 21 career goals for the Orange, and she earned All-ACC First Team honors in her freshman and sophomore seasons.

Lammers and de Vries both shift between offense and midfield. Neither have any problem dribbling past defenders, creating their own shot or creating space to open play for others. They both also spend periods of every game positioned in the center of the field as the focal point of the offense, especially when only one of the two is on the field.

The main difference between their playing styles is that Lammers tends to shift slightly toward the right flank throughout games, whereas de Vries moves toward the left. This was evident in Syracuse’s 5-3 win over No. 12 UConn, when Lammers frequently combined with Quirine Comans on the right flank, and de Vries with Laura Graziosi on the left.

For SJ Quigley’s second goal against UConn, Lammers cut in from the right side of the shooting circle before sending the ball to Quigley for an assist. Later in the game, de Vries was waiting on the left flank before receiving the ball from Lammers and dribbling into the circle. De Vries set up Comans for her first goal of the game off of Lammers’ pass, giving SU a 4-1 lead. 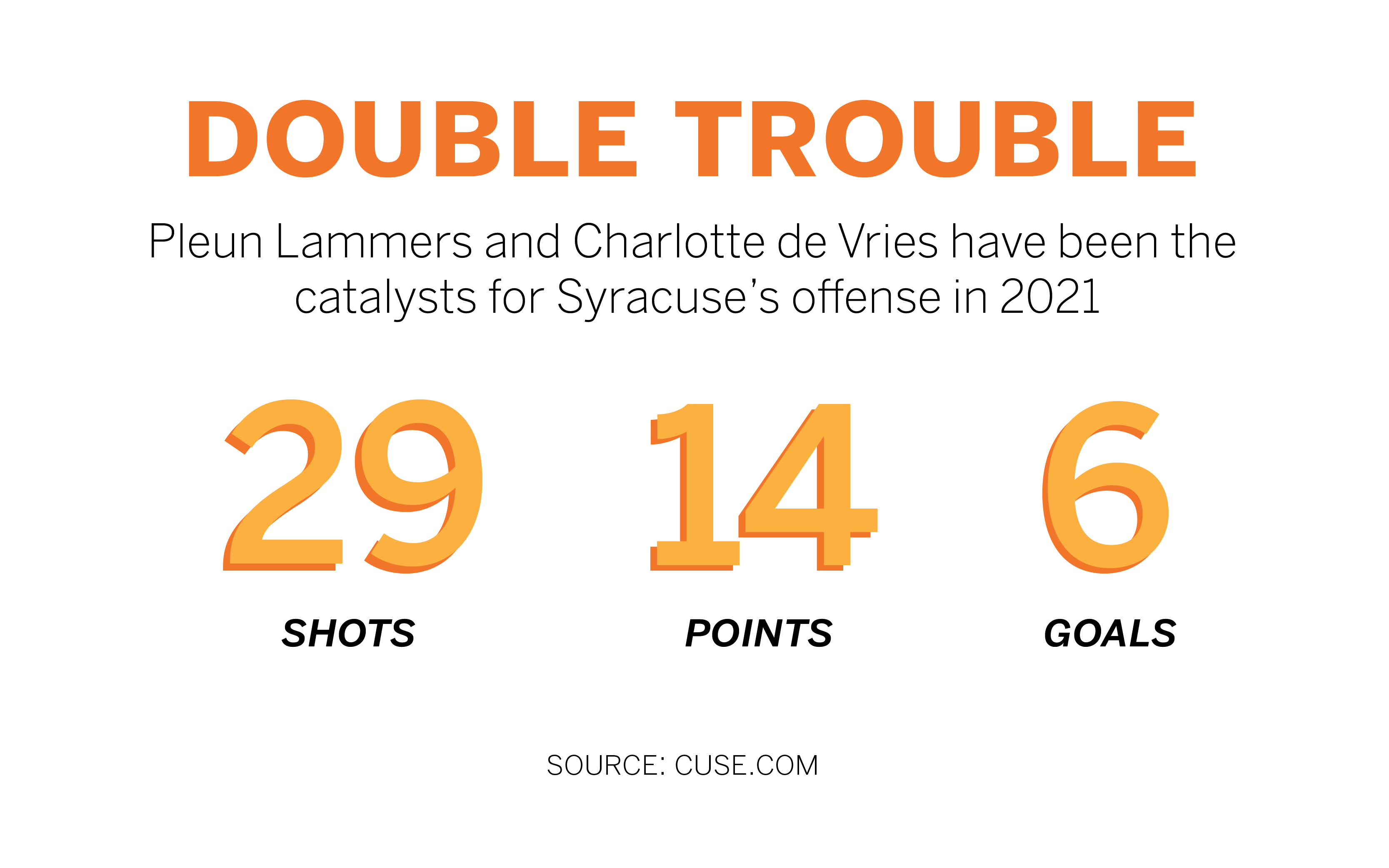 De Vries is now in her third season playing for Syracuse, so the team is very familiar with how she plays, forward Carolin Hoffmann said.

“It’s not that big of an adjustment,” Hoffmann said when asked about de Vries’ return.

With two new assistant coaches this year, integrating de Vries back into the lineup is more of an adjustment for the coaching staff rather than the players, Hoffmann said. SU dealt with an abnormal preseason, as Broenink arrived just a day before Syracuse’s first scrimmage. And assistant Mike Pallister only arrived a day before SU’s preseason started, head coach Ange Bradley said.

“It’s a lot of connecting and catching up and being able to find how to work with each other,” Bradley said.

De Vries scored her first goal of the season in SU’s 5-3 win against No. 12 UConn and was the catalyst for the bulk of the Orange’s goal scoring opportunities. Her contributions helped Syracuse in its win against UConn, following a dramatic loss in overtime to No. 8 Rutgers.

“We’re still fitting … roles and responsibilities,” Bradley said of de Vries’ return after SU’s win against Vermont. “That’s another change and another … wrinkle added in, a good wrinkle.”