Jenna Caira was at her Canadian Tire office desk in Toronto in August 2016 when she saw an announcement that softball would return to the Olympics in 2020. The former Syracuse legend had been retired from softball for a year, but the draw of getting to pitch in the Games was pulling her back to the sport.

Seven months later, Team Canada head coach Mark Smith called Caira, wanting to know if she would be interested in returning to the national team by playing in tournaments that summer. While Caira hadn’t pitched competitively since leading Canada to gold in the 2015 Pan American Games, Smith told her returning to the pitcher’s circle is “like riding a bike.”

“When I went out to practice again for the first time, I felt like I could pitch forever,” Caira said. “I came in even more rejuvenated.”

Caira’s decision to retire in 2016 — although temporary — came after seven years pitching for the Canadian Senior National Team. She competed in international competitions between 250-strikeout seasons at Syracuse, where she finished as the Big East’s all-time leader in strikeouts and Syracuse’s career leader in wins, starts, innings, strikeouts and ERA. This summer, she’ll have the opportunity to add to her legacy with an Olympic appearance.

Those record numbers were made possible in large part by Caira’s change-up, deemed the “best in the world” by both Team Canada catcher Natalie Wideman and Caira’s longtime trainer, Todd Martin. Martin taught Caira the pitch in her childhood driveway at just 14 years old, and it is now widely known as the “Jenna Caira change,” Martin said. The change-up is famous for both its strong location and deception, according to Team Canada assistant coach Melissa Basilio.

With one of the world’s most devastating pitches in hand, Caira routinely found success in the circle. She helped lead Canada to silver in the 2011 Pan Am Games and multiple top-5 finishes in the World Baseball-Softball Confederation Championships. Caira was named a co-captain of the national team in 2013, and she pitched again in the Pan Am Games in her hometown of Toronto in 2015, helping defeat the U.S. for gold.

Winning a gold medal in her hometown at the Pan Am Games was as far as Caira ever thought she could go with the sport. The International Olympic Committee was debating including softball in 2020, but it had done that for years with no results, and Caira didn’t believe it would come back. She decided to retire from softball, even against Martin’s wishes.

“I felt like I truly had done everything I could as a player, as a teammate, as a leader for this program and for my country in terms of softball,” Caira said. “I just felt like I needed to determine who I was outside of softball.”

When she retired, Caira recalled Smith telling her that if softball returned to the Olympics, she “had to be there.” But she never fully left the game — in between shifts at her public relations job, she ran softball clinics for kids in Ontario, Canada. The feeling of wanting to return to the field lingered, according to Wideman.

Canada won their Olympic qualifying game in September, but COVID-19 hit a few months later. On March 22, Canada became one of the first countries to pull out of the Olympics, and two days later, the Games were officially postponed a year. 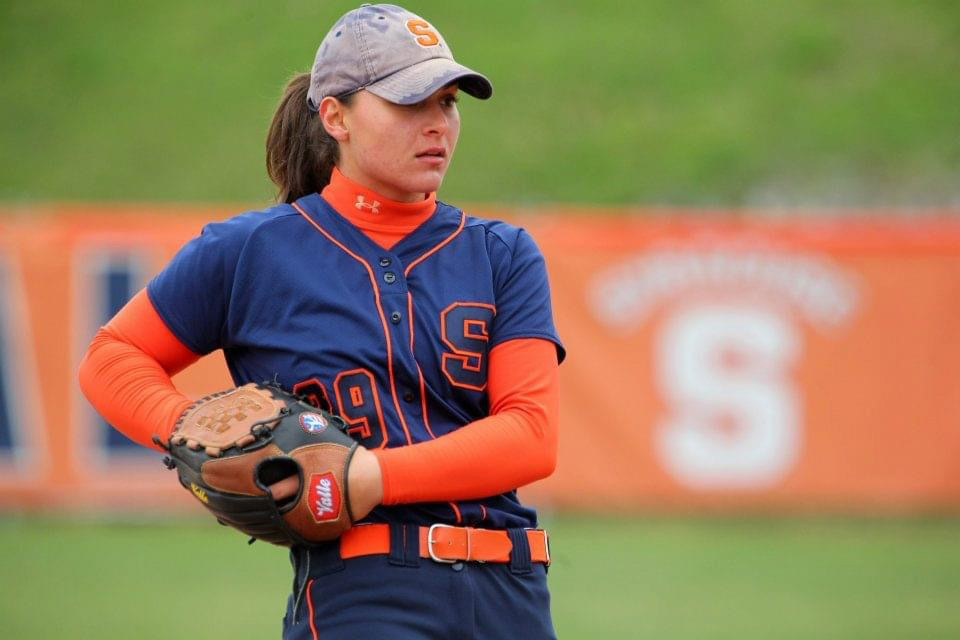 Jenna Caira is the winningest pitcher in Syracuse history. Courtesy of Jenna Caira

In less than a week, Caira went from lifting over 300 pounds on a trap bar with her teammates to using her dog’s food bag for weight training in her house, she said. Without a treadmill, she ran outside in the cold Ontario weather to maintain her speed. She read books assigned to her by mental performance coach, Wade Gilbert, and wrote letters to teammates as part of a virtual camp. After having the summer off, the coaching staff brought the team back on Sept. 1 to train.

Now, Caira finds herself just over four months away from living her dream of playing in the Olympics. She is expected to become the first Syracuse softball player to appear in the Games, and she will be looking to lead her country to their first softball medal.

“Having softball be away from her life and then realizing there’s still fire burning, it means that much more that it was gone and now it’s back,” Wideman said. “She wouldn’t be back if she didn’t want it.”