With Garrett Shrader as Syracuse’s new starting quarterback, the Orange’s offense became even more dynamic, utilizing the quarterback’s dual-threat abilities with read-options on almost every play.

Read-options in head coach Dino Babers’ offense leave the quarterback with several choices: pitch the ball to a motioning receiver, hand it off to a running back or keep it themselves. The decision is dependent on how one defensive player — left unblocked — reacts after the snap.

For most of the game Shrader made appropriate decisions, finishing with 178 rushing yards on 29 attempts. When he didn’t keep it, Shrader gave the ball to Sean Tucker, the Atlantic Coast Conference’s Running Back of the Week. Tucker recorded 153 yards on 26 attempts, recording his fourth straight 100-yard rushing game.

These are the key plays when Syracuse used the read-option against Wake Forest:

After hitting on this play — when Shrader handed the ball off to Tucker for a 15-yard gain — the Orange return to their bread and butter in Wake Forest territory. This read involves Tucker and Shrader getting rid of the motioning receiver that is present on most plays.

While Shrader struggled with his decision-making on this play in previous games, he made the right choice on almost every read against the Demon Deacons.

After the snap, defensive tackle Rondell Bothroyd — who was left unlocked — comes charging at Tucker, ready for a tackle for loss. But Shrader doesn’t hand off the ball to Tucker, instead shuffling with him for a few steps while he makes his decision.

As Bothroyd turns his body to Tucker, Shrader pulls the ball out from his stomach, running toward the left side of the field. With a good block from left tackle Matthew Bergeron, Shrader gets a free lane down the left hash, embracing a hit as he falls down deep into the red zone.

“That mesh-point is very, very delicate,” Babers said about the point where Shrader hands the ball off to Tucker. “They really have to have a fantastic feel for each other with their body language.”

While the Orange have run jet sweeps with Taj Harris in prior games this season, Syracuse updated its jet sweep after his departure. This play is usually a straight give to the motioning receiver. But Syracuse has also turned this into a read for the quarterback, allowing him to keep the ball if the receiver doesn’t have an opening.

“It makes the defense have to defend the whole 53 and a third yards,” Babers said about the use of jet sweeps. “We’re trying to make the defense defend not only vertically, but horizontally the entire football field.”

The blocking on this play allows Shrader or Courtney Jackson — the quarterback and receiver, respectively, in this play — to get past the line of scrimmage, leaving Bothroyd unblocked again for Shrader to read. Similar to the last play, Shrader sees Bothroyd extend himself to the outside, freeing up the middle for Shrader to run through.

While Jackson has two blockers in Tucker and fullback Chirs Elmore, Shrader makes do with Dakota Davis, who pulls and takes out the middle linebacker. This gain was shorter than some of the other runs that Shrader had in the game, but moving the chains and scoring points is all that Babers wants out of his no-huddle offense. 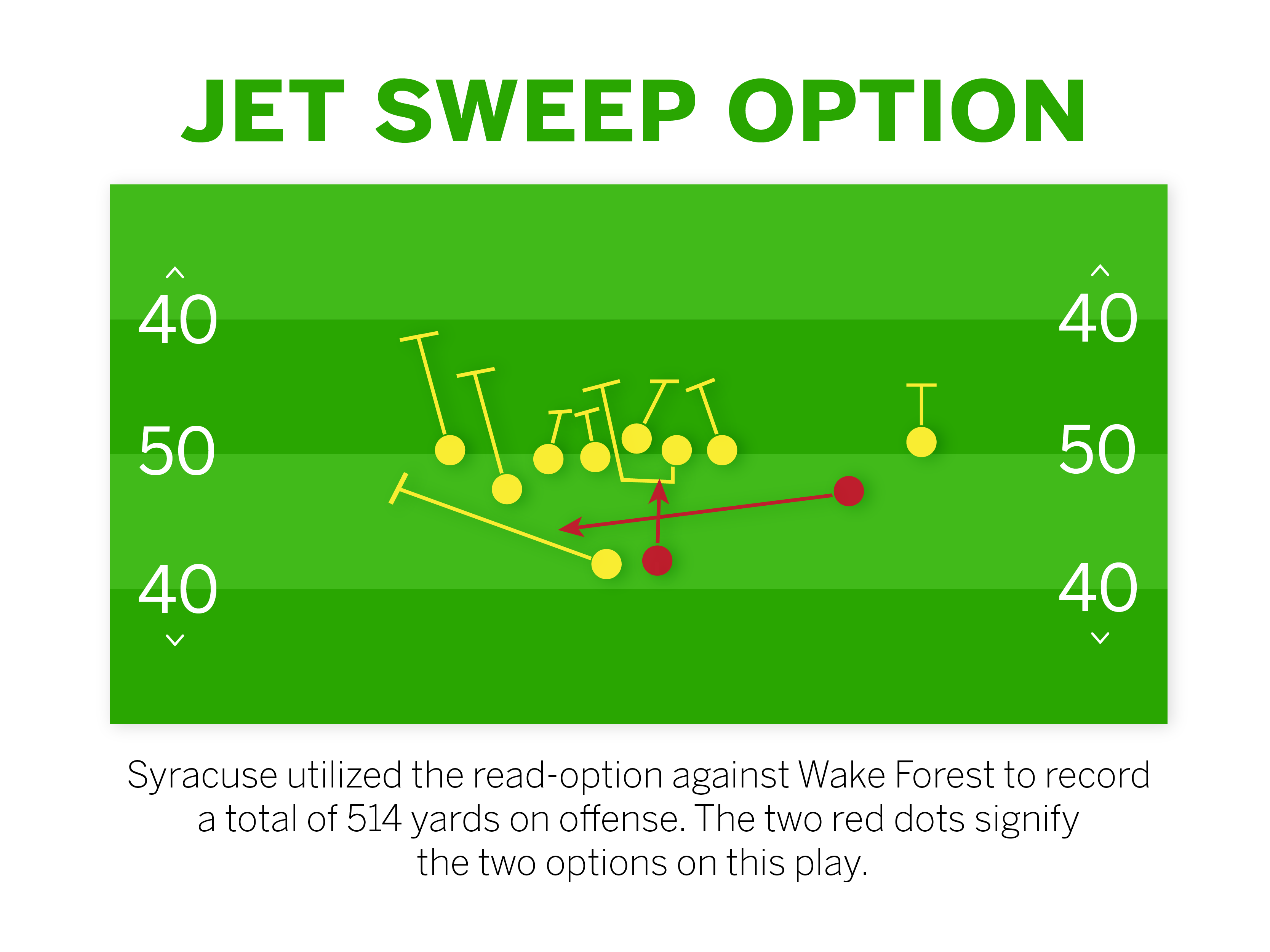 Confuse the defense, pass to Tucker

As Syracuse trails by five points 15 yards from the end zone, Wake Forest expects the Orange to run a screen pass, something they have done on most opening plays in the red zone.

SU knows the Demon Deacons are expecting this, which is why Devaughn Cooper runs a bubble screen on the far side. And before the snap, Elmore motions to the other side of the field, confusing the defense even more for what play is going to come.

Elmore’s shift causes WF defensive back Traveon Redd to move to the other side of the field while the ball is being snapped, leaving just one defender — linebacker Quincy Bryant — between the Orange and the end zone.

No matter if Shrader or Tucker had the ball, this play would’ve broken for a big gain. But Shrader probably wouldn’t have gotten past Bryant — which Tucker is able to do with a single cut. The quarterback makes a smart decision, giving the ball to the running back with the most all-purpose yards in the country for the score.

“We’re finally there, running the ball, definitely giving us a true-option offense,” Tucker said. “The defense doesn’t know who’s getting the ball.”

Syracuse runs the jet sweep option with Jackson, allowing Shrader to read the defense. He chooses wrong, keeping the ball instead of giving it, leading to a loss of yardage on the first drive of overtime. But Tucker picks up the first down, setting up the play in this clip.

Rather than Bothroyd, the much faster defensive back Chelen Garnes is left unblocked on the play. Just seeing Garnes out there should be enough for Shrader to know that he should give the ball to Tucker, but he doesn’t.

Instead, Shrader keeps the ball as Garnes slightly moves toward Tucker. Garnes quickly cuts back at the quarterback, taking him down and setting up a second-and-long. The Orange would settle for a field goal, allowing Sam Hartman and Wake Forest the chance to win the game.

“We’re moving the ball for the most part. We’re scoring points,” Shrader said. “We have to continue to be consistent for us moving forward.”

The consistency Shrader wants starts with him making the proper reads on each play and being cognizant about the importance of positive yardage in crucial moments of the game. Mistakes can’t happen in overtime, especially with the ACC top-ranked team on the opposite side of the field.