Syracuse sits at .500 halfway through the season with six Atlantic Coast Conference matchups remaining. If the Orange win three, they have a chance at a bowl game since six victories make a team bowl eligible.

With six games completed, the last three of which went down to the final buzzer, this is how each SU positional group has performed through the first half of the season and what the Orange can do to improve in the second half.

Below is my midseason report card, graded A-F. No Whitman curve here.

Syracuse has found its answer at quarterback in dual-threat Garrett Shrader. He seems to be making improvements in the throwing game every week, but his primary strength is still his legs. So far, no team has figured out how to properly contain him through three starts — he had two rushing touchdowns in his first start and has topped 130 yards on the ground in the last two.

The problem for the Orange was it took too long to figure it out. Head coach Dino Babers started the season saying Syracuse would play with a dual-quarterback system, leading it to switch back-and-forth between Tommy DeVito and Shrader for the first three games. The quarterback contest was too close, and one needed to outright win the job, Babers said. But that switching disrupted both quarterbacks’ flow and ability to get into rhythm. It disrupted the offense’s rhythm too. That switching likely cost SU the Rutgers game, one where the stagnant offense put up seven points and lost.

Shrader said his goal is to throw the ball on every down, but he also knows that isn’t realistic. He needs to improve his timing with his receivers, in particular on deep balls, so the offense can maintain some balance. His legs — and Sean Tucker’s — will take care of the rest. The second half of the season looks promising. But looking at the first half collectively, SU has only recently figured out its quarterback situation and system.

Tucker has been Syracuse’s best player, and it hasn’t been close. He’s responsible for 40.3% of the Orange’s yards from scrimmage, a staggering statistic that’s over 4% more than the next-most in the country. He also leads the nation in all-purpose yards and all-purpose yards per game and is second in the NCAA in rushing yards and rushing yards per game.

There are no questions about Tucker. Syracuse has been leaning on him heavily and will continue to do so, Babers said. So far, he’s proved he can handle the massive workload, something Babers was unsure of at the start of the season. Tucker said he recovers fast and that he’s taking care of his body, so he’s always “ready for the next one.”

Worth noting, however, was Cooper Lutz’s fourth-quarter fumble when SU was trying to force overtime against the No. 19 Demon Deacons. The Orange went from a wealth of depth at running back, with Lutz, Abdul Adams and Jarveon Howard, to being thinned out. Howard entered the transfer portal, Adams missed the last game for unspecified reasons, and Lutz’s untimely fumble may lead to questions about trusting him later in the season. In the event that Tucker gets injured, SU could be in serious trouble with its limited depth.

SU’s wide receiver core has actually looked impressive considering it played three games without its No. 1 receiver Taj Harris. The Orange will be without Harris for the rest of the season after he entered the transfer portal. But the bottom line is that SU doesn’t throw the ball much. The balance it’s currently found includes running the ball twice as much as it throws it, and that makes sense because Syracuse tailors the offense to Shrader and Tucker.

Without Harris, Anthony Queeley, Courtney Jackson and Damien Alford have had to step up. Jackson has looked good running after the catch, but SU’s offense still ranks the second-worst in the conference in terms of passing yards. The Orange have improved the timing of deep balls but still have a ways to go.

Shrader ends up scrambling on a fair number of designed passing plays, which isn’t necessarily problematic because the quarterback is very good with his legs. But it’s also an indication that Syracuse’s wide receivers aren’t creating as much separation as they should be.

This is a tough position to evaluate since Babers’ usage of tight ends is sparse. Maximilian Mang and Luke Benson have five catches for 29 yards across the first six games. Benson missed the Liberty game and didn’t play against FSU due to an injury suffered against UAlbany. Chris Elmore missed Syracuse’s first four games for reasons unrelated to injury or discipline, though the Orange have been using him more frequently at fullback than tight end. Mang is young and still learning.

The tight ends have contributed significantly in the rushing attack, primarily taking on blocking roles under this offensive system. Elmore has been a solid addition since the start of ACC play, becoming a more mobile, sixth offensive lineman for the Orange. He’s shaken off the rust, and the newly-elected offensive captain should have an increased impact soon. 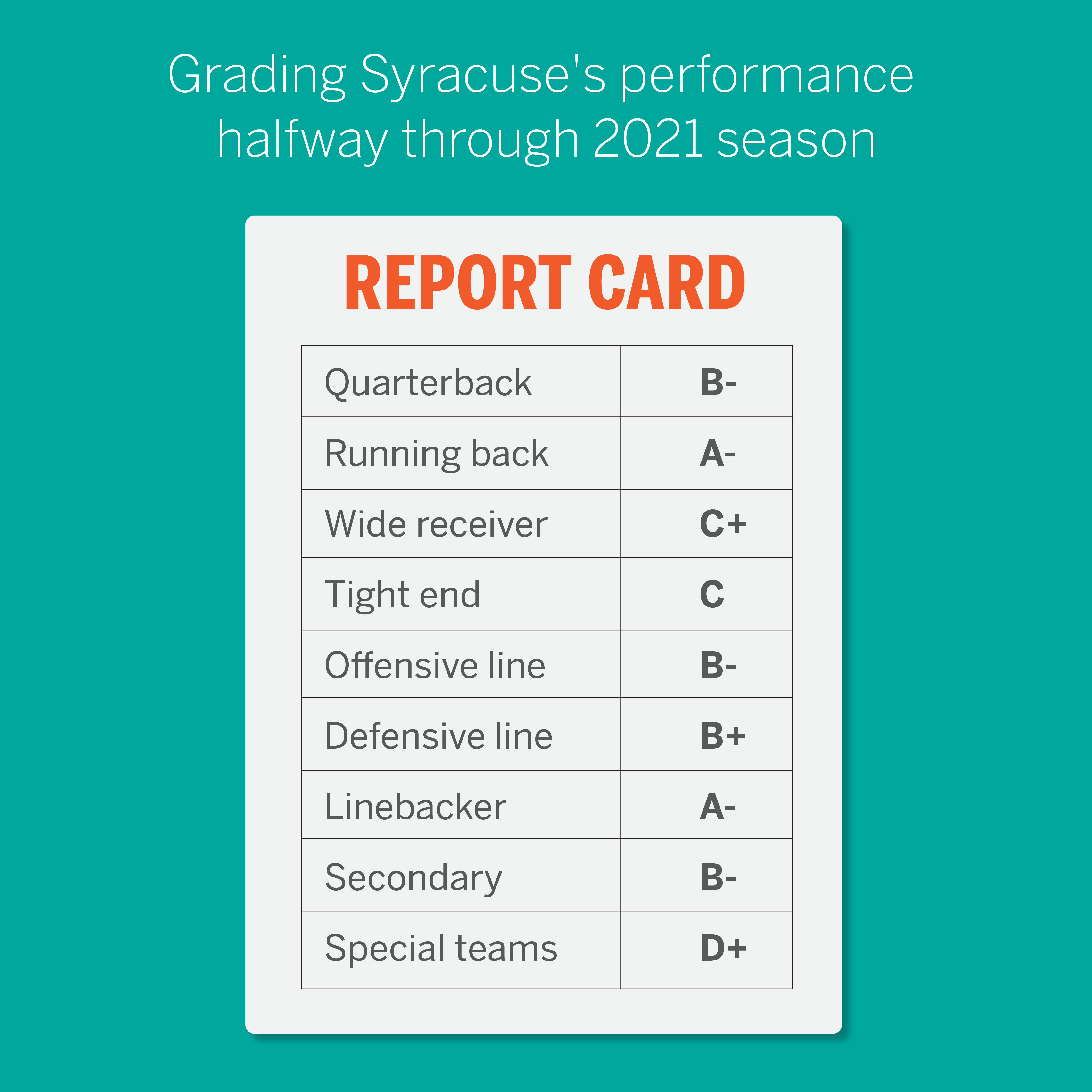 The offensive line has made drastic improvements since ranking 113th out of 127 Football Bowl Subdivision teams last season. The Orange rank 16th nationally in Average Line Yards, a stat adjusted to credit the line appropriately depending on how far the ball carrier runs. Several players have referenced the addition of new offensive line coach Mike Schmidt as a reason for improvements.

Matthew Bergeron’s pass-blocking grade was the highest in the country during Week 2, according to PFF (92.3), and Syracuse is allowing fewer than two sacks per game. Last year’s average was 3.45 per game. SU’s offense has been highly reliant on the run game via Shrader and Tucker, and the offensive line deserves their fair share of credit for that success.

But the Orange just lost key rotational players in Chris Bleich, Darius Tisdale and Airon Servais, and though their replacements (Kalan Ellis and Josh Ilaoa) played well against Wake Forest, it’s too early to determine what long-term impact those absences might have on SU. On passing downs, Shrader starts many plays by rolling out of the pocket, partially because it opens up his options to move the ball with his legs. But the quarterback also does that because SU’s offensive line still has room to progress when it comes to pass protection.

Syracuse’s defensive line leads the ACC in sacks (22, for a loss of 129 yards). Cody Roscoe’s 6.5 sacks through six games is tied for sixth in the nation. The defensive line has a good rotation going between McKinley Williams, Kingsley Jonathan, Curtis Harper, Terry Lockett, Caleb Okechukwu, Josh Black and Roscoe.

Geoff Cantin-Arku said the linebackers weren’t on the same page as the defensive line last year, but they worked all offseason to change that. They’re communicating more and getting pressure on the quarterback, particularly in crucial third-down situations. Defensive coordinator Tony White’s had a fair amount of success rushing three but added in more linebackers to change up the pressure. The defensive line is extremely experienced, and they’ve proved that with their play thus far.

The linebackers have been one of Syracuse’s most consistent units. Led by defensive captain Mikel Jones, an honorable mention All-ACC selection last year and SU’s leading tackler, the group that calls itself “the mob” has consistently wreaked havoc on opposing offenses. Stefon Thompson, who has the second-most tackles on the team, and Marlowe Wax, who has the sixth-most, have been constant forces at the second level.

All are in their second year of White’s 3-3-5 defense, and Wax said they all feel much more comfortable than they did a year ago. It’s shown.

In all six games, SU’s leading tackler has been a linebacker. In almost all, two of the top three tacklers have been linebackers, too. Part of that is the nature of the position, but last season, SU didn’t have much depth beyond Jones. This season, behind Thompson, Wax and Cantin-Arku, the group is having an excellent year, according to Babers.

Syracuse’s secondary sent three players to the NFL last season in Ifeatu Melifonwu, Andre Cisco and Trill Williams. Without them, the unit has still looked consistent. Cornerbacks Garrett Williams and true freshman Duce Chestnut have made big plays on either side of the field, with Williams breaking up six passes in six games and Chestnut leading the team in interceptions with two.

The secondary has made a couple blunders, particularly in deep coverage during SU’s overtime loss to Wake Forest. In the past two weeks, SU’s had concerns guarding the middle of the field, too.

The defense gave up over 30 points during back-to-back ACC games, but there aren’t drastic reasons for concern just yet. The Orange seem to have all the pieces they need — though both Williams and Chestnut have been banged up, along with Ja’Had Carter.

Tackling in the secondary has been good, and SU is allowing 194.2 passing yards per game, the second-fewest in the ACC.

Syracuse entered the season with a famed reputation for being “Special Teams U.” Against Rutgers, a plethora of special teams miscues tainted that reputation, including an 8-yard punt, a missed field goal from inside 45 yards and three illegal formation penalties on punts. That game was certainly the worst of the year, but the special teams unit has still been shaky for Syracuse.

Andre Szmyt did hit a game-winning field goal over Liberty, though it was from 35 yards. But he missed a crucial fourth-quarter kick against Wake Forest and an extra point against Florida State. SU had a 10-yard punt against the Demon Deacons and a 33-yard one when it was already backed up deep in its own territory.

Returner Trebor Pena has been a bright spot for SU — Babers said he thinks it’s only a matter of time before Pena breaks free on one — but this isn’t the esteemed special teams unit that the Orange have had in the past.

Roshan Fernandez is a senior staff writer at The Daily Orange, where his column appears occasionally. He can be reached at rferna04@syr.edu or on Twitter @Roshan_f16.