As soon as kids walked through the metal gate to the Kirk Park court, they were greeted by hand sanitizer, a mask, a free t-shirt and Eric Devendorf.

After a brief shootaround, Devendorf called everyone together. “Need you guys a little excited,” he said to the group of 12- to 17-year-olds, leading a round of clapping. Devendorf replicated that energy for three 40-minute training sessions throughout the day.

Devendorf, who played at Syracuse from 2005 to 2009 and ranks 14th in all-time scoring, led about 50 local boys and girls through free basketball clinics Saturday. Everyone wore masks and trained with Devendorf and two of his former SU teammates, Mookie Jones and Demetris Nichols. The kids were also treated to free Nike sneakers and a backpack, plus an optional haircut and food.

When Devendorf announced the back-to-school charity event on Sept. 24, all 75 available spots filled up in less than a day, Devendorf said. Not everyone who registered came on Saturday, but the event was a success nonetheless.

“We’re just grateful for the people that showed up and for the people we could impact and motivate, and hopefully inspire to do better,” Devendorf said.

Jones emphasized the importance of giving back to the community. Though Devendorf, Jones and Nichols aren’t originally from the central New York area, the three have made Syracuse home after playing for the Orange. Now, they’re trying to return the support that the people of Syracuse gave them as college athletes.

“We came here to play basketball, but we leave with so much more because of the love and support we get from the community,” Jones said. “So it’s only right that we give it back … Because for me, personally, I wouldn’t be able to live here without it. I appreciate it, all the other guys appreciate it. This is how we’re showing it, by giving back to the community.”

Devendorf and his teammates didn’t pull the charity event off alone, though. Dozens of their friends and family members, as well as Syracuse Police Department officers, volunteered. Jones and Nichols helped lead kids through drills from noon to almost 3 p.m.

“Hold that follow through,” Nichols said during a baseline jump shot drill. “When you shoot, look at the front of the rim,” he said.

Nichols, who played for SU from 2003 to 2007 and now calls Syracuse games for ACC Network, would occasionally walk out to the three-point line to instruct young hoopers individually. He showed them how to properly grip the ball and demonstrated how to step into a shot off the catch. Nichols’ shooting station focused mainly mid-range shots at the elbows and baselines. 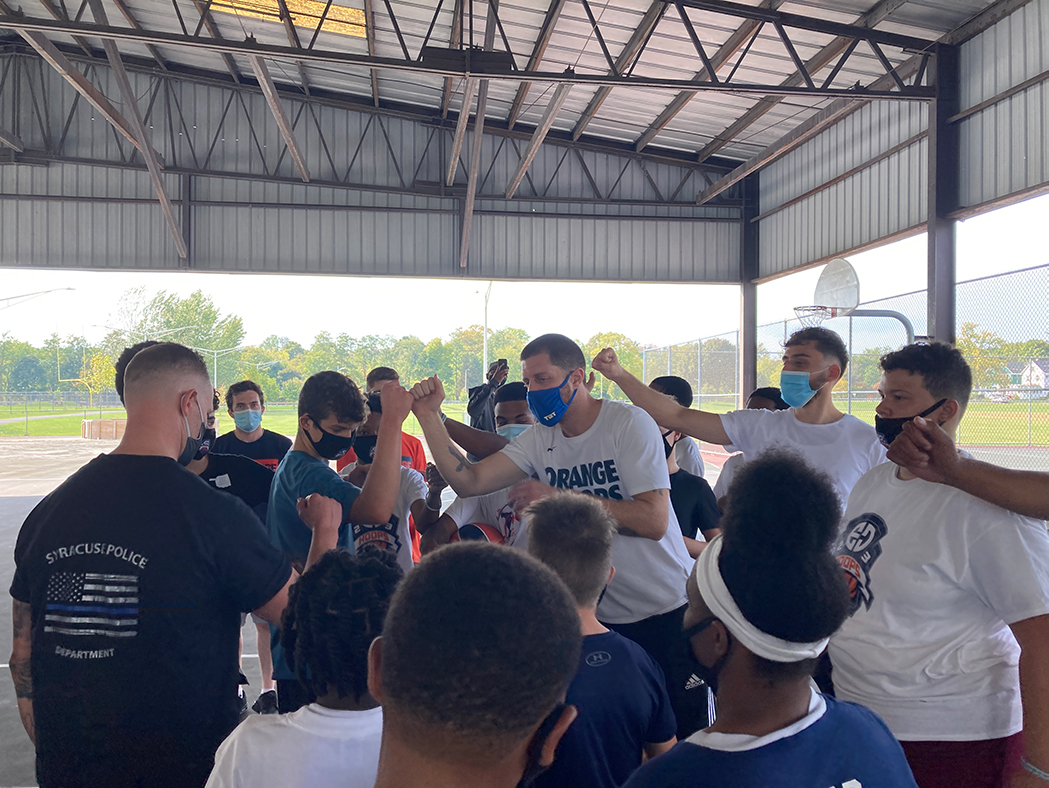 On the other court, kids first went through a stationary dribble session, then layup lines, then 1-on-1 practice. At one point, Devendorf told everyone to stay low, keep their eyes up and let their fingertips control the ball. For 1-on-1s, players started near midcourt, dribbled toward either a SPD officer or Jones, then made a move for a finish inside.

The Oct. 10 clinic wasn’t Devendorf’s first, as he organized a similar back-to-school event last year for students in the Syracuse City School District. When gyms were closed over the summer, he posted instructional skills videos to his Twitter.

“Basketball, obviously, is what I love to do, so I think it’s only right for me to be able to share all the knowledge I’ve gained from all the great teachers over the years and pass it down to the next generation,” Devendorf said in a late September phone call.

Marty Masterpole, the Onondaga County comptroller, brought his 14-year-old son to the clinic, which he said was “a great opportunity.” His son, a freshman at Bishop Ludden, has worked with Devendorf before, Masterpole said.

“It’s nice for Eric, Mookie and those guys around the community,” Masterpole said. “It’s really good when the guys you see on the big stage give back to the kids.”