True freshman Duce Chestnut wasn’t nervous during his collegiate debut against Ohio on Sept. 4, his mother, Leslie Brown, said. But he was nervous when he saw his mom standing on the side, behind a crowd of reporters, while he was giving his first postgame press conference at SU. Brown was listening, making sure the newcomer didn’t say anything he shouldn’t. She described it as just being “more of a mom.”

For just under four minutes, Chestnut fielded questions about his team-high eight-tackle performance, his fourth-quarter interception and what head coach Dino Babers later described as the first time in 35 years he’d ever heard of a player getting the game ball after their debut. Chestnut dedicated his performance to a hometown friend who died earlier that week, and he started to walk away from the podium when he finished.

As he left, Brown shouted from the back of the crowd. “Good job, son!” she yelled, and Chestnut and the group laughed.

Chestnut’s rise to fame at Syracuse began that Saturday in Ohio — he said his phone blew up more than when he announced his commitment to SU. His ascension continued through the Orange’s first six games, where he leads the team in interceptions (two) and has the fifth-most tackles (27). Chestnut has started every game for a Syracuse secondary that sent three players to the NFL last season, and he was the third true freshman to start at defensive back in an SU season-opener in over 35 years.

“Hopefully he stays around a lot longer than the last three (Andre Cisco, Ifeatu Melifonwu and Trill Williams),” Babers said on Sept. 27. “But when (he’s) ready to go, you have an opportunity to get drafted in the top three rounds … I’ll be the first one to tell him.”

Still, Chestnut hasn’t been perfect. Babers said that the cornerback has felt some “growing pains.” His holding penalty in the secondary against Wake Forest negated what would’ve been a Marlowe Wax strip sack and SU recovery in the second quarter. Chestnut was also beaten on the game-winning touchdown throw in overtime by an impressive catch from the Demon Deacons wide receiver.

But games like his debut at Ohio and plays like his fourth-quarter interception against Florida State where he jumped in front of a screen pass are the reason the Camden, New Jersey, native has become a household name on Syracuse’s defense. Yet Chestnut’s role as a starter for the Orange was “years in the making,” said Marcus Hammond, his 7-on-7 coach at Next Level Greats.

An elementary-school-aged Chestnut started playing 7-on-7 football when he went with his older brother to NLG practices. His brother, who’s six years older, was doing defensive back training drills while Chestnut was on the other side of the field as a quarterback at the time. They did core work with medicine balls, sprints with resistance bands and power sleds and footwork exercises, too. He did the same drills, including exercises for speed development, conditioning and explosivity, and although he couldn’t keep up with the pace of the older players, Chestnut never struggled, Hammond said. 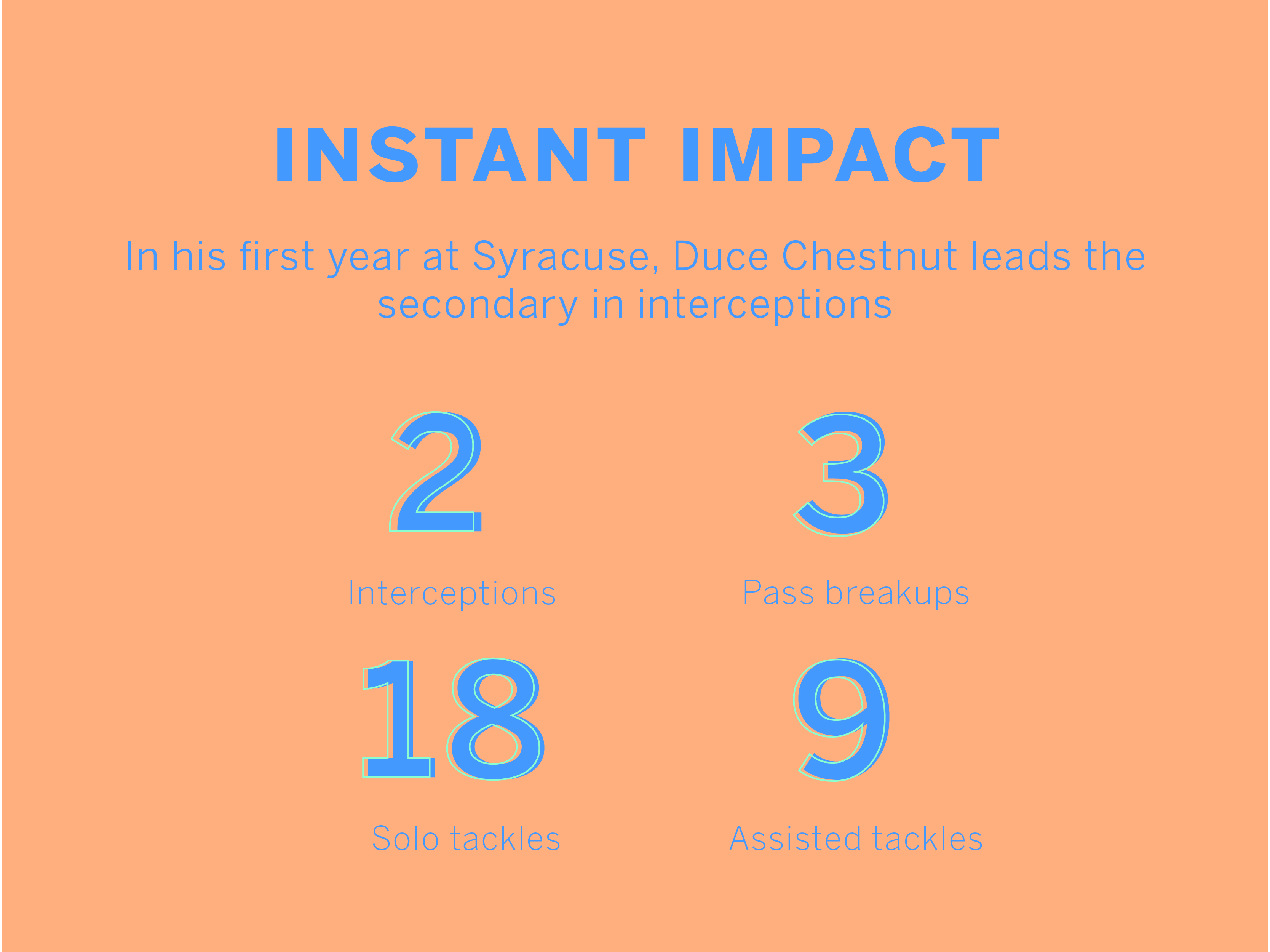 At the time, the program was in its early years and Chestnut was the youngest player there. But even now that NLG is well-known and has hundreds of players, Hammond said it’s not normal to have someone that young in the program.

“You don’t see 9-, 10-, 11-, 12-year olds finishing our workouts because they’re physically exhausting — our program is geared to get high school kids ready for college,” Hammond said. “The bulk of the players are 9th, 10th, 11th, 12th graders and college players.”

It was clear Chestnut was talented even at that age, Brown said. And because he was exposed to NLG at an early age, he was “so far ahead of everybody,” Hammond said.

Chestnut earned his place on NLG III — the program’s best team — by his sophomore year. He’d made his biggest jump during the offseason between his freshman and sophomore year, when Chestnut worked with NLG alums including Sean Chandler, a defensive back on the Carolina Panthers, and Brad Hawkins, a fifth-year starter at Michigan.

“(Chandler and Hawkins) said, ‘This guy is the next one up,’” said Dwayne Savage, Chestnut’s coach at Camden (New Jersey) High School. “They saw how he was able to do a lot of drills and hang with them and basically compete.”

NLG’s program had just begun to reach national prominence before Chestnut’s leap from freshman to sophomore year, so that meant increased travel to national tournaments, which exposed Chestnut to better teams and players a lot quicker, “expediting his learning curve,” Hammond said.

“By doing that week-in and week out, you get acclimated to the speed of elite players,” Hammond said.

7-on-7 is played at a quicker pace compared to traditional football since it’s played with a 40-yard field and it is one-hand touch instead of tackle. Rushing plays are nonexistent and the five wide-receiver lineup means defensive backs get more targets in one tournament than in an entire high school season, Hammond explained. 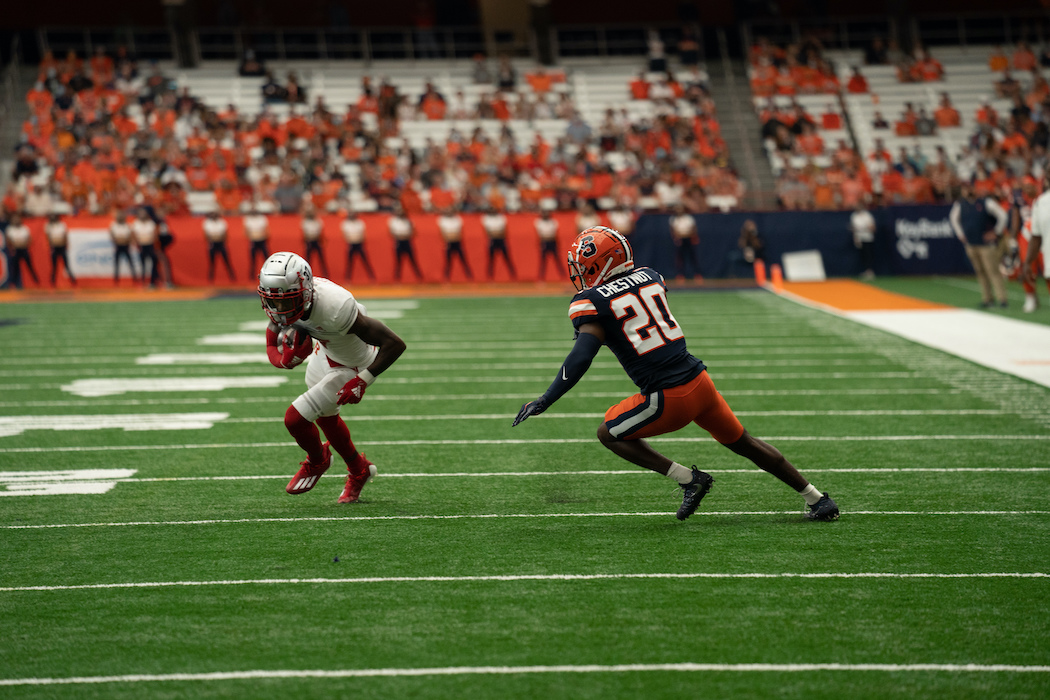 Defensive backs backpedal against a receiver 220 times in a four-hour practice, Hammond estimated, which means about 3,000 reps in 10-15 practices spanning from January to June. Add in 500 backpedals, times 15 tournaments, and players return to their high school teams with over 10,000 reps from one offseason.

“Now multiply that by three and you end up with Duce Chestnut,” Hammond said.

Chesnut’s “growing up moment” came during the first 7-on-7 tournament of his sophomore year, when he was lined up against 5-star tight end and future LSU commit Arik Gilbert. Chestnut, who was 5-foot-10 at the time, covered against the 6-foot-5 Gilbert. But the tight end extended in the back of the endzone, snagged the pass and dropped his toes for the score. Chestnut was noticeably upset, Hammond said, because he was in the right position.

It was a valuable learning experience, Hammond said. For Chestnut, that marked the first time an opponent was so athletic that no defensive back could’ve made that play.

But playing one-on-one with highly-rated recruits from all over the country shaped Chestnut into arguably the best 7s player on his team by his junior year, Hammond said. Quarterbacks have to hit tight windows and pockets, but Chestnut learned to “bait” them for interceptions.

He’s Duce Chestnut when he’s walking around Syracuse. But once he puts on that football helmet and stuff like that, now it’s Ballgame Chestnut.

In one tournament in Delaware, a receiver was wide-open, to the point where Hammond said he couldn’t even see Chestnut on the highlight tape. Then the defensive back flew into the frame, intercepted the ball and clicked his heels together in celebration, just like he later did against Ohio in his SU debut.

After each interception, Chestnut shouts out “ballgame,” the nickname he’s had since he was little because “a lot of special things happen” once the ball is in his hands, Savage explained. At SU, he still shouts that after big plays.

But playing 7s — and making those highlight plays — meant the 11-on-11 game was “way, way slower” for him because he was used to a faster speed, Hammond said.

“Just slowing down the game, being able to read coverages and being able to know where you’re at and seeing the plays in full speed is just a little different on the field,” Chestnut said.

Initially, it was nerve-wracking to be on an “island,” covering a receiver one-on-one. Chestnut said he was nervous about ending up on YouTube for the wrong reasons. Poor coverage was always exposed, and he remembers being frequently “picked on” as the young guy on NLG III during his sophomore year. But 7s — and all those repetitions — built his confidence. Savage put him on the island to lock up the other team’s best receiver in 11-on-11s. At SU, he occasionally does the same thing. 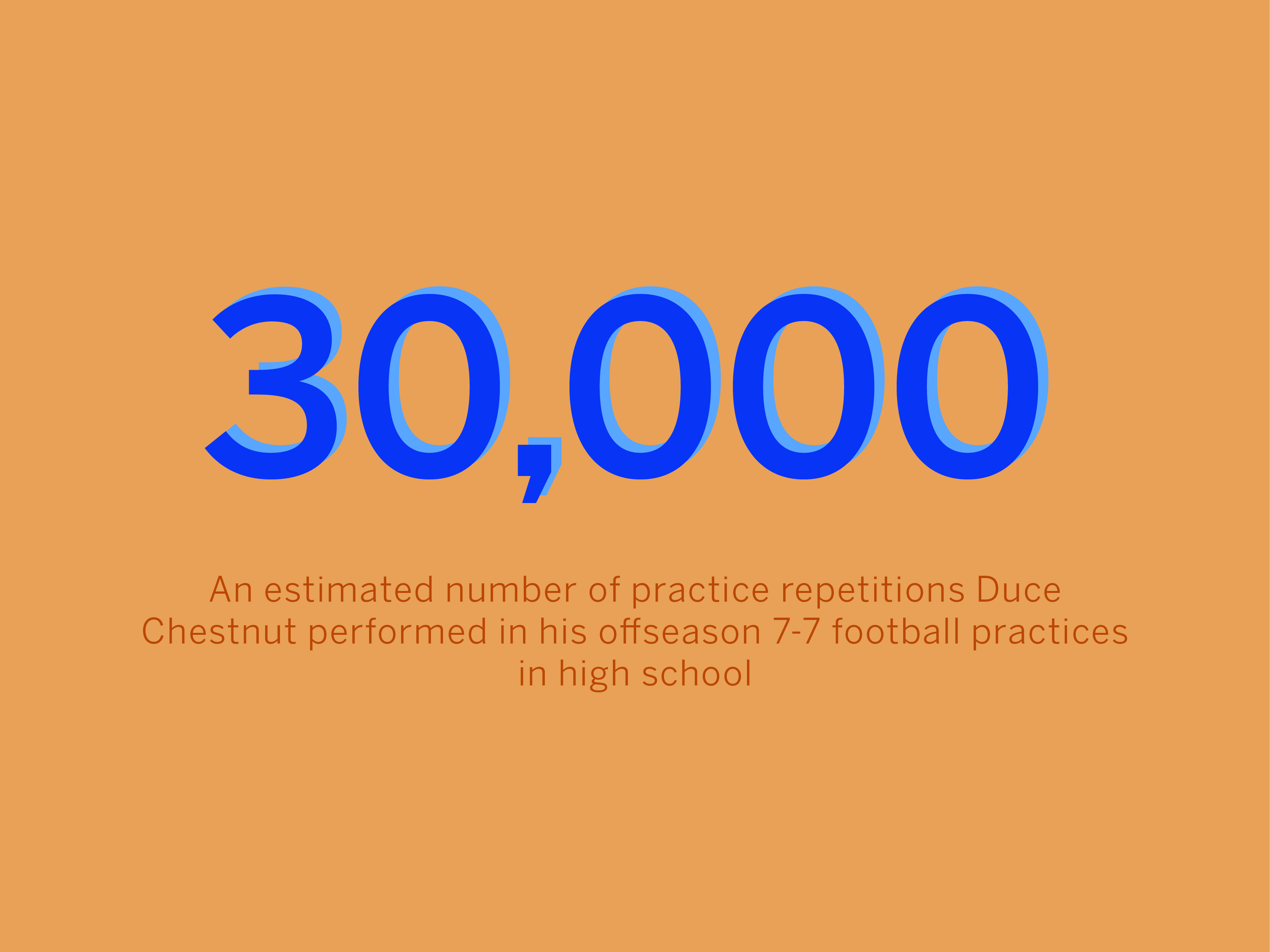 Babers said he initially saw Chestnut as a physical player who made interceptions in the Orange’s preseason scrimmages but also one who also lacked experience. He has the tools to be very good, Babers said, but he’s still growing. The head coach expressed disapproval of Chestnut’s decision to run back his interception instead of taking a touchback against Ohio, which Savage chocked up to Chestnut always “going for the home run, or the jugular.”

Sometimes Chestnut will get beat, and sometimes he won’t, Babers explained, but “all of a sudden we’re going to have a really good corner that people can’t throw at.”

Savage describes Chestnut’s rise as analogous to Clark Kent and Superman. He’s two different people on and off the football field, and he hasn’t let the hype get to his head, those close to him said. That’s been apparent from his play.

“He’s Duce Chestnut when he’s walking around Syracuse,” Savage said. “But once he puts on that football helmet and stuff like that, now it’s Ballgame Chestnut.”

The post Duce Chestnut’s rise to prominence at SU has been years in the making appeared first on The Daily Orange.