After Rutgers scored in the final seconds of the third quarter, Syracuse quarterback Tommy DeVito took to the field, looking to respond in the one-possession game.

But immediately after the ball was snapped, Rutgers defensive lineman Mayan Ahanotu mauled right guard Darius Tisdale. Ahanotu leaped onto DeVito, hitting the ball on his way down. The Scarlet Knights hopped onto the ball, SU’s second turnover of the outing.

Rutgers capitalized on DeVito’s fumble with its second field goal opportunity a few plays later, making it a two-possession game.

“There was a break in the protection, but it was my fault not taking care of the job,” DeVito said. “That’s what my number one job is, to take care of the ball.”

In a renewal of the Big East rivalry, Rutgers (2-0, 0-0 Big-Ten) beat Syracuse (1-1, 0-0 Atlantic Coast) 17-7 on Saturday. Rutgers’ strong defense forced the Orange to move away from the run game, which propelled them last week over Ohio, but they were unable to make the change today. DeVito and Garrett Shrader were unable to spark SU’s offense, going 2-14 on third down and punting eight times. Both quarterbacks finished with 191 passing yards, and SU’s offense had three turnovers against the Scarlet Knights.

Head coach Dino Babers’ up-tempo, no-huddle offense took first to the stage as Rutgers deferred to get the ball at the start of the second half. Like last week against Ohio, Babers’ marquee fast-paced system worked using quick routes and handoffs to running back Sean Tucker.

Tucker, who had 181 yards in 25 carries against the Bobcats, was especially crucial in 3-, 4- and 5-yard runs, Babers said. On second-and-long against Rutgers, he took the ball left and cut up 4 yards, moving the chains for the Orange.

But Rutgers plugged the holes that were open for Tucker in the opening drive, not allowing the running back to get going as he did against the Bobcats. Tucker finished with 54 yards on 13 carries against the Scarlet Knights.

“I think just watching the film, they kind of expected what was going to come,” DeVito said. “We hit the correct spots and the correct holes, but we had to finish in the pass game.”

DeVito wasn’t able to find any open players to pass to on the next two plays, throwing out of bounds to avoid the pressure. And on the punt from freshman James Williams on fourth down, Rutgers broke through the protection. Max Melton blocked Williams’ attempt, placing the Scarlet Knights in the red zone.

Rutgers botched its own special teams play a few minutes later, fumbling the snap on a field goal. The Orange picked up the ball at the bolded “S” in the middle of the field. The no-huddle offense marched down the field, gaining a third-and-long at the 14-yard-line. Babers called a timeout, allowing his team to get into its first huddle of the afternoon, designing a play to go to its most impactful offensive weapon — receiver Taj Harris. 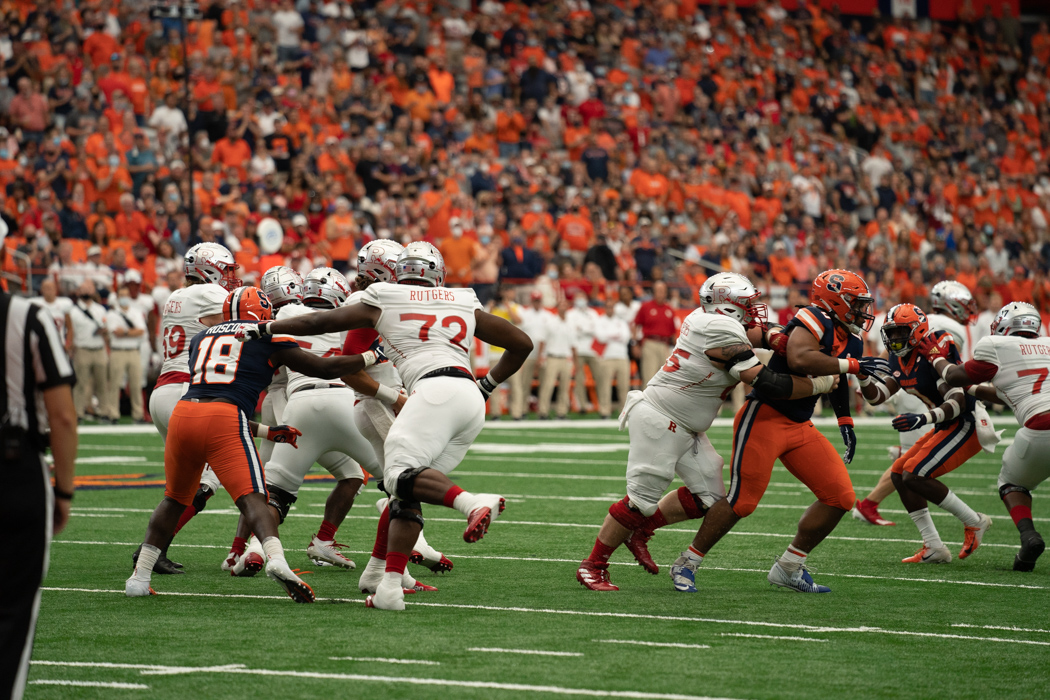 DeVito and Garrett Shrader were unable to spark the Orange’s offense, going 2-14 on third down and punting eight times. Lucy Messineo-Witt | Photo Editor

The New Jersey native received the ball on a screen, with an array of blockers creating a path for him to get the first down. He juked out one more defender coming from the other side of the field, inching further toward the end zone.

But the Scarlet Knights’ Avery Young punched the ball out, and Melton picked up the ball. Babers said earlier this week that the Orange had less room for error against Rutgers, but SU had a turnover on its opening two drives.

“Taj needs to hold on to the ball. He’s one of our playmakers,” Babers said. “We need him out on the field.”

Babers said that he knew before the game that he was going to play the Mississippi State transfer against Rutgers. He had hinted at it happening in SU’s opening win over Ohio, but Shrader only got one drive to end the game.

Shrader was brought into SU for his dual-threat abilities, using his legs to pick up 2 yards on his first play at shotgun. But on third-and-10, Shrader was unable to avoid pocket pressure, leading to Rutgers’ first sack of the outing.

Still, Syracuse’s defense continued to make up for the offense’s inability to make splash plays throughout the first half. After Mikel Jones made a tackle to force Rutgers to punt, Shrader took the momentum Jones created on the ensuing drive. Shrader dropped back on first down instead of running, heaving a long bomb to Harris on first down. But safety Christian Izien batted the ball down.

Shrader hit Sharod Johnson on the sideline on second down, with the crowd erupting as he had moved the chains for the first time in a Syracuse uniform. He went deep again, this time to Courtney Jackson, but the ball went too high.

With pressure on second down, Shrader scrambled out to the right, before looking back and hitting Harris at the 20-yard-line, the stands screaming once again. But on the next play, Rutgers’ defensive line came at him again, and he fumbled, the ball rolling out of bounds. Andre Szmyt fired a 43-yard kick, but like every other scoring attempt in the first half, it fell short.

After a scoreless first half, DeVito took on quarterbacking duties again, starting with the ball inside the one-yard line. DeVito said that the pressure Rutgers created in the first half stacking the box caused the Orange to turn to the passing game.

“Early on they weren’t bringing as much, but as the game went on and we started to pass the ball more, they started putting more pressure on me,” DeVito said.

Like Shrader, DeVito went deep to Harris on the first play of the drive, this time the ball soaring over any defender. But the ball bounced off Harris’ palms and on the next play, Johnson dropped another route.

After DeVito’s fumble at the beginning of the fourth quarter, Syracuse tried to answer back with designed run plays for the quarterback. He rebounded from his turnover, streaking down the sideline on first down for 21 yards. He was also hit as he went out of bounds, adding another 15 yards.

Babers repeated the same play, but DeVito wasn’t able to cross the line of scrimmage. On second down he dropped back, firing at Johnson, who was crossing into the middle of the field. He threw it too far behind, though, and Johnson was unable to haul in the ball.

On third down, DeVito looked to the other side of the field as Anthony Queeley ran a comeback route near the first down marker. Queeley caught the ball, but he was two yards out of bounds. Babers sent out the punting unit, and boos rang again throughout the Carrier Dome — this time against the Orange.

The post DeVito, Shrader fail to spark offense in Syracuse’s 17-7 loss to Rutgers appeared first on The Daily Orange.