Alexa Romero had just walked Virginia Tech’s Mackenzie Lawter in the fourth inning. As catcher Geana Torres squatted behind the plate and put her fingers down for the first pitch to Darby Trull, Romero shook off a riseball outside, wanting to instead go inside. But Romero didn’t get the ball inside. Instead, she watched as Trull knocked her first home run of the season off the outfield netting in right field, putting the Hokies up 4-0.

“If you don’t get the ball inside, it goes over the fence,” head coach Shannon Doepking said postgame.

Rochard pitched 22 out of the 26 innings played over the four-game series, allowing just one run and seven hits. Her no-hitter on Friday was the first time Syracuse (19-20, 11-17) had been no-hit since joining the ACC in 2013. Doepking said Saturday that the Orange knew they would have a better chance with Romero in the circle, and that showed in the second game of Saturday’s doubleheader, when Romero allowed just three runs over seven innings. On Sunday, Doepking opted to start the fifth-year in back-to-back games, something she said Romero has to adjust to if SU wants a chance in the ACC Tournament in two weeks.

“If we want any shot at the ACC Tournament, the kid’s going to have to go back-to-back games,” Doepking said. “I think Lex understands the role she’s in right now, that we need her to throw.”

With Syracuse outscored 22-1 in the first three games of the series and 85-15 against ranked ACC teams so far this season, Romero had little room for error Sunday. Virginia Tech was able to get on Romero early, though, with Kelsey Brown lining a single up the middle on the game’s very first pitch. Brown proceeded to easily steal second, and after two straight strikeouts, Romero hit Jayme Bailey near her elbow, putting two runners on base with two outs. Kelsey Bennett hit a single into shallow right field, which scored both runners after Angel Jasso was unable to make the diving catch.

“There’s nothing you can do on that ball. I thought it was played fine,” Doepking said. “I think we positioned a little bit differently after that. We pushed Angel more (toward the) middle of the field than on the line. (But) I don’t think you can defend that ball, it just found the spot.” 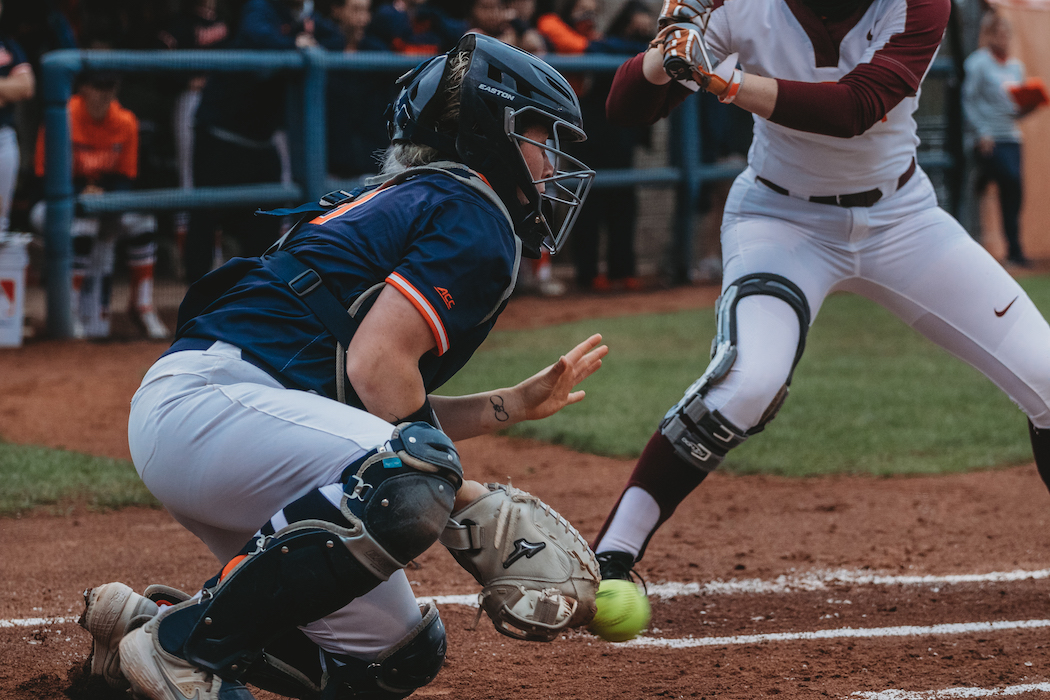 Fagan’s homer over the right-field fence in the top of the fifth knocked Romero out of the game, as Doepking brought in freshman Lindsey Hendrix in relief. By starting Torres behind the plate, Doepking said postgame that she hoped that Romero would get into “more of a groove” and would work quicker, which could create better results for the Orange. She said Torres needed to be more assertive when catching, particularly in situations where Romero shook off her pitch calls, such as on Trull’s home run.

The lack of communication between Romero and Torres on Sunday could be attributed to the minimal amount of innings that Torres has played with Romero this season, Doepking said. Before the two home runs on Sunday, Doepking said there should’ve been a timeout. Romero thought the ball should go outside, but Torres thought it should be inside, and the ball ended up over the plate and out of the park.

Romero finished the day with just three strikeouts, giving up more hits than strikeouts for the second consecutive day. She also earned her eighth loss of the season, which moved her below .500. With her final season at SU ending, and with only four games against No. 13 Clemson remaining before the ACC Tournament, Romero will likely be expected to continue carrying the brunt of Syracuse’s pitching load.

She has struggled against top-25 ACC teams this season, allowing a combined nine runs in two starts against then-No. 9 Florida State, as well as 11 runs in 14 innings against Virginia Tech this weekend. But Doepking mostly attributed her struggles to the level of competition that the Orange have been facing.

“At the end of the day, Virginia Tech’s just a better team than us,” Doepking said. “Unless we play really great softball, it’s gonna be tough where we’re at right now to keep up with a team like Virginia Tech. I think everybody saw that this weekend.”