Syracuse was down 4-0 in the first half on April 22, and the Orange needed to get on the board to stop Boston College’s run. Emma Ward curled around the scoring area and dumped a pass off to Emily Ehle near the right side of the scoring area. Ehle paused for a second as she corralled the ball in her stick and surveyed the field.

She could’ve made the simple return pass to Ward, who was running directly on goal and had outpaced her defender. But Ehle also saw a second defender shuffle over to cover Ward. In a split second, Ehle noticed the now-unmarked Megan Carney, wide-open on the left side of the scoring area. Ehle laid a perfect pass into the cradle of Carney’s stick, who caught the ball in one motion, turned and rifled a shot into the net.

Ehle transferred from Georgetown this season and has fit seamlessly into the right side of Syracuse’s attack. Every game, the graduate transfer runs on the field as soon as the draw specialist comes off, highlighting her pseudo-starter role. In four years with the Hoyas, she posted 52 goals and 64 assists in 58 games. Now at Syracuse, Ehle has already scored five times and tallied 12 assists in a new role in head coach Gary Gait’s offense.

Her primary focus as a lefty attack is to act as a playmaker for the likes of Carney, Ward and Meaghan Tyrrell. She’s often spotted holding the ball and surveying the field for a pass as the cutters on the team find open space.

“Emily Ehle is the perfect role player,” Gait said. “She’s not trying to make things happen every time she touches the ball. She keeps her head up, she hustles, she gets after ground balls.”

Ehle began playing lacrosse on a local youth team for Earl Hall when she was 5 years old. Hall, a Syracuse alumnus, played midfield alongside Gait in the 80s. Gait once stopped by a game Ehle was playing, and Hall told him “you better watch this one,” said Ehle’s father, Joe.

A native of Baldwinsville, New York, Ehle played on Christian Brothers Academy’s varsity team for five years, starting in eighth grade. Playing both attack and midfield, Ehle led CBA to two state championships in 2013 and 2016, the latter being the school’s only undefeated girls lacrosse state championship in its history. She was named a U.S. Lacrosse high school All-American in both 2015 and 2016.

“Sometimes young kids can get caught up in a stat narrative,” said Pat Britton, CBA’s then-assistant coach and current head coach. “Emily was pretty cut and dry, and she just wanted to win and wanted to bring everybody else with her.”

As a captain, Britton said Ehle made everyone around her better. Britton recalled the section semifinal against Fayetteville-Manlius, when the team entered halftime down a few goals for the first time all season. After making his locker room speech to the team, Britton turned it over to Ehle, who “lit a fire under the team” as they returned to the field and came back to keep their undefeated season alive. 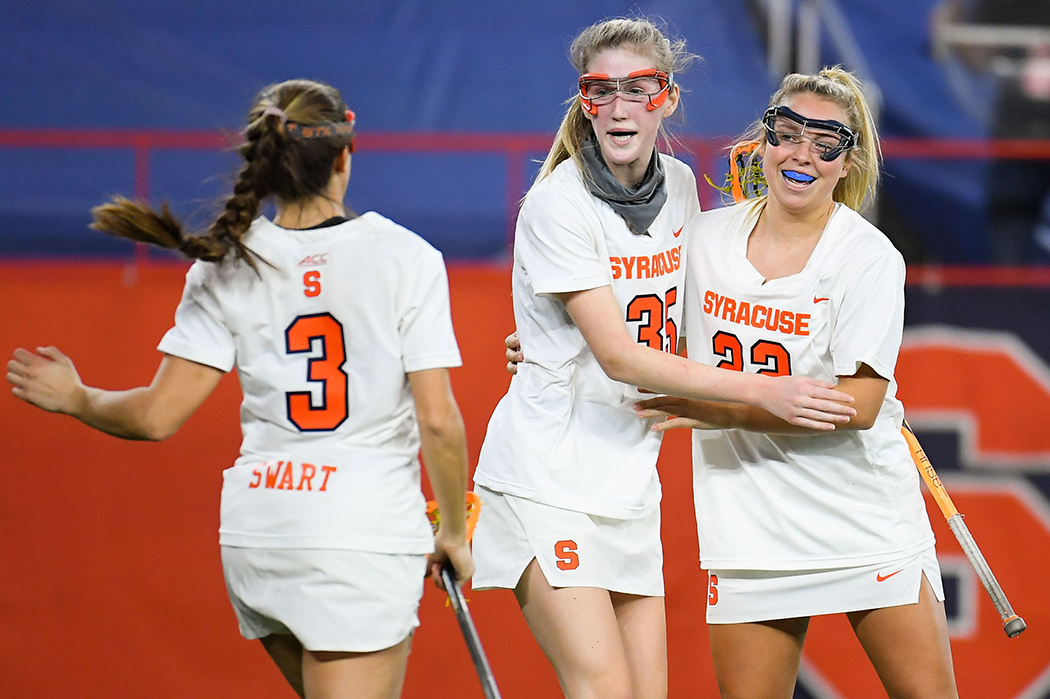 In six starts, Emily Ehle has 12 assists and 12 shots this season for Syracuse. Courtesy of Rich Barnes | USA TODAY Sports

“I have a pretty strong belief that you don’t become a leader, that you are a leader,” Britton said. “I thought from the very beginning Emily was a leader.”

Ehle was a player that could help anyone on the field, Britton said. Much of her on-field help came in the form of assists. When she was younger, Ehle would get angry when she didn’t score, but Joe explained how an assist was worth more than a goal because you set the score up. It clicked in her head after that, Joe said, and Ehle always looked to set her teammates up.

“A lot of coaches would tell her, ‘Just go shoot, just go shoot,’” Joe said. “She’d say, ‘If I don’t have a good shot, I’m not taking it, that’s not what I do. And if somebody else is in a better position, I’ll get them the ball.’”

That pass-first mentality led to multiple college lacrosse offers from Ivy League schools, Northwestern and even Syracuse. Despite hailing from the area and being a part of a die-hard Syracuse family, Ehle chose to play at Georgetown. It was a “a tough pill to swallow,” but as long as it wasn’t Notre Dame, her family supported it, Joe said sarcastically.

Ehle chose Georgetown for its academic program, the campus that was right next to a big city and the chance to play for a team in the top-25 at that time. Under head coach Ricky Fried, Ehle became a focal point of the Hoyas’ offense, playing in the same lefty wing role that she has here at Syracuse.

Fried said Ehle contributed an “immense amount” to the Georgetown offense in her four years, evidenced by her 116 points in just 58 games. She was never a captain, but a big part of her leadership on the field was getting her teammates involved in the offense, he said. Ehle is “a pass-first type of player,” which provided a new element to his offense, Fried said.

“Players that are dodge-first, everybody kind of stands and watches,” Fried said. “When they know somebody is a feeder and is willing and wants to pass the ball, they’re more apt to be active and cut.”

When the NCAA granted a blanket waiver to athletes affected by the pandemic, Ehle spoke to Gait about playing for the Orange. With Morgan Alexander having torn her ACL, Gait said the team was in need of a lefty, so it made sense to bring Ehle onto the team.

So far, Ehle’s pass-first mentality has led not only to 12 assists but also to just 12 shots this season for Syracuse. With only six starts, Ehle is fifth on the team in assists — she and Sierra Cockerille are the only starters on attack with more assists than goals.

After four years away from home, Ehle’s friends and family love that she finally suited up to play for Syracuse in the Carrier Dome, Joe said. No longer a true focal point of the offense like she was at Georgetown, Ehle has provided valuable scoring opportunities for Syracuse in her first season.

In her time at Christian Brothers, Georgetown and now Syracuse, Ehle has always been happy to set her teammates up for success, something that has become a key part of her role at Syracuse and a large part of the potency of SU’s offense.

“I never really cared about scoring because I had so many people around me that were so talented that it was easy to move the ball to the next person,” Ehle said.

The post After transferring from Georgetown, Emily Ehle returns to Syracuse appeared first on The Daily Orange.