Meghan Root asked her father why she was going to a low-level soccer camp during her sophomore year of high school. She was injured. Her right hip was ridden with an undiagnosed injury that had her crying in pain after practices. But Ravo, her father, convinced her to play at the camp and see how she felt.

“I went and my hip was actually a wreck,” Root said. “And I played, I played well.”

Her goal had always been to play for Syracuse. That year, Root sent an email to the Orange’s coaching staff but received no reply. After the camp, though, three SU coaches reached out to her — they wanted Root to be their next top goal scorer.

Before Root was on Syracuse’s recruiting radar, she played varsity soccer at Pioneer Central High School in Yorkshire, New York, as a seventh grader and, during her debut, scored the golden goal in the overtime of a playoff game. Head coach Frank Asquith made Root a full-time varsity member the following season, and two years later, Root played through that injured right hip and finished with career totals of 81 goals and 51 assists.

She verbally committed to the Orange in April 2016 and has since become one of their top offensive threats, tallying six goals and two assists across her three seasons at SU.

“The girl was putting so many hours into practicing and training that, you know, we just always wanted that to be her dream,” Ravo said. “So even with all the pain and the injuries, she was always focused on her dream of playing Division I soccer.”

But after committing to Syracuse, Root underwent hip surgery that caused her to miss her entire junior season. She had played through pain for at least a year and a half, Ravo said, and went to about five or six different orthopedics for MRIs. None of them found anything.

At first, the doctors said it was tendonitis, but the pain continued for months and months.

“They’d send her to (physical therapy), and she would cry every night because she was in horrendous pain,” Colleen Root, her mother, said. “But she didn’t stop.”

Eventually, Root found a doctor that pinpointed the source of her pain: a femoroacetabular impingement, which doesn’t allow the femur to move around freely in the bone socket and hip joint. After playing soccer since she was 6 years old, the repetitive motions had taken a toll on her body, and the injury caused a torn labrum and other complications in her core and groin that required surgery. Root was forced out of soccer for almost a year.

“She was well on her way to becoming one of the top scorers in western New York at the time, and then all of a sudden, disaster struck. She had to undergo the surgery,” Asquith said.

After Root’s surgery, Erin Byers, one of Root’s closest friends and a longtime teammate, went to her house almost every day to watch Netflix and cheer her up. At school, Byers would be the one to wheel Root around in a wheelchair or help her get to class when she was on crutches.

They had their first varsity call-up together, where Root scored the game-winner on a night Byers called “the most exciting day of my life thus far,” and were named captains as sophomores, something Asquith didn’t usually do, he said. Both played on the same club teams — Empire Revolution and the Western New York Flash — but then Root’s latest injury prevented her from sharing the field with Byers. 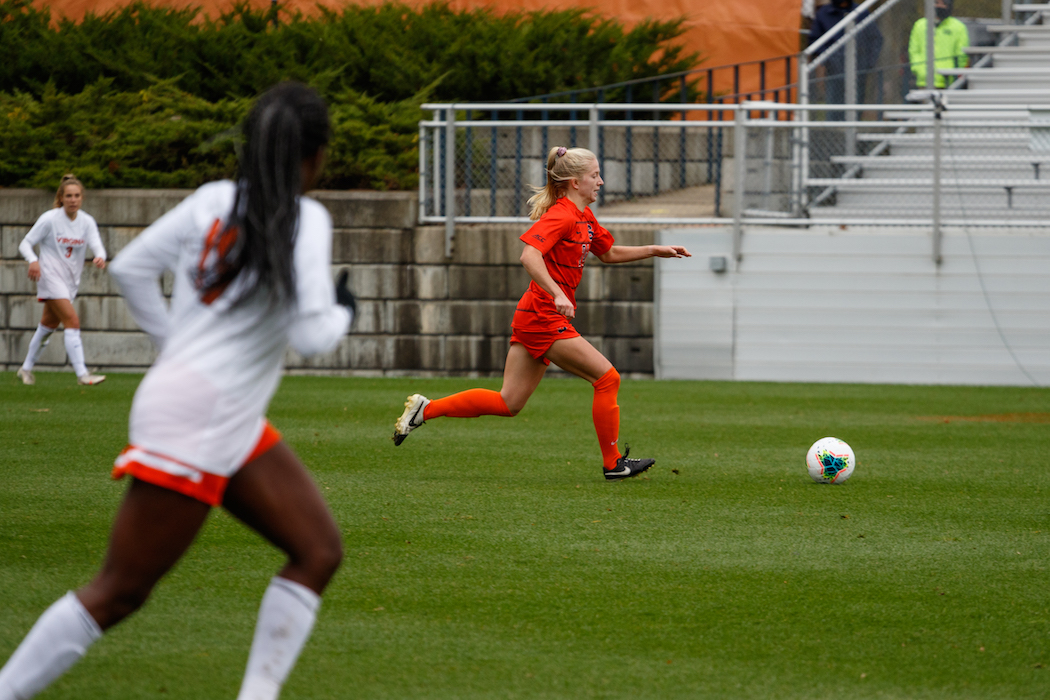 Root still attended almost every practice and game that season, helping with drills during practices and game-plans. But on the field, her absence was still felt. She’d scored so many of the Pioneers’ goals, averaging 27 per season, but suddenly the offensive burden fell on to the rest of the team.

“It was kind of like other people had half of what she had, so together we could maybe make up for it with two, three, four people,” Byers said. “But it’s such a huge loss to lose one person that was such a complete player and that has so many of the best qualities on the field.”

Root returned for her senior season to score 45 goals and tally 13 assists. She ended her career at Pioneer Central with 126 goals and 64 assists, despite missing a whole season.

When Root first joined Syracuse in 2018, she was shy and quiet off the field, then-junior Georgia Allen said. She started 11 out of 18 games in her freshman fall campaign. In the second-to-last game of the season, played a season-high of 89 minutes against Wake Forest two weeks after recording her first collegiate goal.

She was well on her way to becoming one of the top scorers in western New York at the time, and then all of a sudden, disaster struck.

In the spring, Root suffered torn abdominal muscles, a torn groin, a left hip impingement and a torn labrum. She knew that corrective surgery would sideline her all of the next season. Root decided to skip surgery and play her sophomore year, despite the injury, under new coach Nicky Adams.

In Root’s three seasons with Syracuse, the Orange have yet to win over three games in a single season. She has demonstrated her ability to create scoring chances and maximize offensive opportunities, and notched SU’s first goal of its shortened 2020 season.

She started all 16 games her sophomore year, recorded 12 shots on goal and led Syracuse with three goals and tied the team-high with two assists. At the conclusion of the fall season, Root underwent hip surgery, knowing she would miss the Orange’s spring season.

Her sidelined spring season was cut short by COVID-19, which sent the team home in mid-March, as Root continued rehabbing in her Syracuse home and joined the team for preseason workouts this summer.

“I feel like my body’s finally in a place where it’s healthy.” Root said. “It is nice.”

After returning, Root competed in a fitness test. She didn’t limp anymore.

The post After 2 hip injuries, Meghan Root prepares to lead Syracuse as a senior appeared first on The Daily Orange.