Bourama Sidibe’s meniscus injury four minutes into the Orange’s season turned the phrase “not ready” into arguably the two most important words of the Syracuse 2020-21 campaign.

Marek Dolezaj was supposed to be the temporary stopgap, but he became much more than that when Sidibe’s knee issues persisted through the entire regular season. As the undersized Dolezaj struggled against bigger Atlantic Coast Conference forwards, Jim Boeheim continued to acknowledge, again and again, that his trio of backup centers was “not ready” to play significant minutes and that he was looking for “anything” from his backups. He wanted to see them improve in practice before playing them in games.

After the first game when SU narrowly escaped Bryant, Boeheim said, “If they don’t play the whole year, it’s because I don’t think they can help us.” The Orange have seen brief appearances from John Bol Ajak, Frank Anselem and Jesse Edwards off the bench, but there’s no bigger positional question mark in 2021-22 and beyond than the center position — a spot that’s been a perennial uncertainty for nearly half a decade.

Syracuse (15-8, 9-7 ACC) enters its second-round ACC Tournament matchup with NC State on the bubble, with a chance to make the NCAA Tournament with one or two wins in Greensboro. But if the Orange hadn’t lost Sidibe, or were more equipped to handle his departure, they may never have been on the bubble in the first place.

Boeheim said Sidibe could be back in 2021-22, but the senior center hasn’t proven that he can remain healthy for a full season. Sidibe has missed at least five games in three of his four seasons with the Orange and has never averaged more than 24 minutes a game. Foul trouble, injuries and ineffectiveness have cut down his minutes and games played for Syracuse.

“Bourama, I think, will and can be healthy,” Boeheim said March 4. “We’re trying to explore that now, in the next week or so, and see if he would want to come back, which he has indicated he would if he’s healthy.”

If the Orange bring the same crew of centers back next season, they run the risk of a similar situation developing at the five position. Dolezaj’s future is also uncertain, and his natural position is the four spot, not the center of the 2-3 zone, Boeheim said. The senior initially told Boeheim he wouldn’t return, though no decision has been made.

If Dolezaj and Sidibe don’t return, Syracuse’s recent crop of center recruits will be tested. Edwards has shown promise in a few games this season, as the 198th ranked player in the 2019 class shined against Miami and North Carolina. His 7-foot-5 wingspan has disrupted opposing offenses and helped him grab some interior rebounds. UNC forward Armando Bacot said postgame on March 1 that Edwards did a much better rebounding job than Dolezaj.

It’s not clear what Ajak’s best position is at Syracuse, or if he has one at all. The redshirt freshman began as a forward, but Boeheim said he struggled there. He moved to center, where he’s seen limited time this season. Ajak is both mobile and vocal in the middle of the zone but has two points, seven fouls and four rebounds in 50 minutes — scattered across nine games. Ajak was ranked 480th in his class, per the 247Sports composite rankings.

Anselem is the option that Syracuse fans have seen the least this season. It’s effectively been a redshirt year for Anselem, who played 26 total minutes in four of the first five games of the season but hasn’t played since Dec. 12. When asked about the center’s development, Boeheim said that Anselem should probably still be in high school, as he only played three high school seasons. Anselem was the 198th player in his class.

Syracuse only has one confirmed signee in the 2021 class: Benny Williams, a wing. The 2021 summer offseason is projected to feature more transfers and player movement than ever due to the NCAA’s decision to waive the one-year sit-out period for transfers. But the Orange haven’t shown an ability to find the caliber of recruits at center they have needed for almost a decade.

“There’s not enough talent at that position on (SU’s) roster,” one scout told The Daily Orange.

Boeheim has suggested Syracuse may look to add players through the transfer portal. But the question is whether Syracuse can compete with other teams from major conferences to bring in high level center talent, via recruiting and the portal. If Syracuse wants to recruit at or near the top of the ACC once again, most of its centers will have NBA aspirations. And Boeheim’s 2-3 zone isn’t particularly compatible with the professional level, scouts said.

“The style of center that they like to play with is becoming less and less common, guys are working less on rim protection and more about guarding in space,” another scout told The Daily Orange. “You’re never going to have the opportunity to do that in a 2-3 zone if you’re a center at Syracuse.” 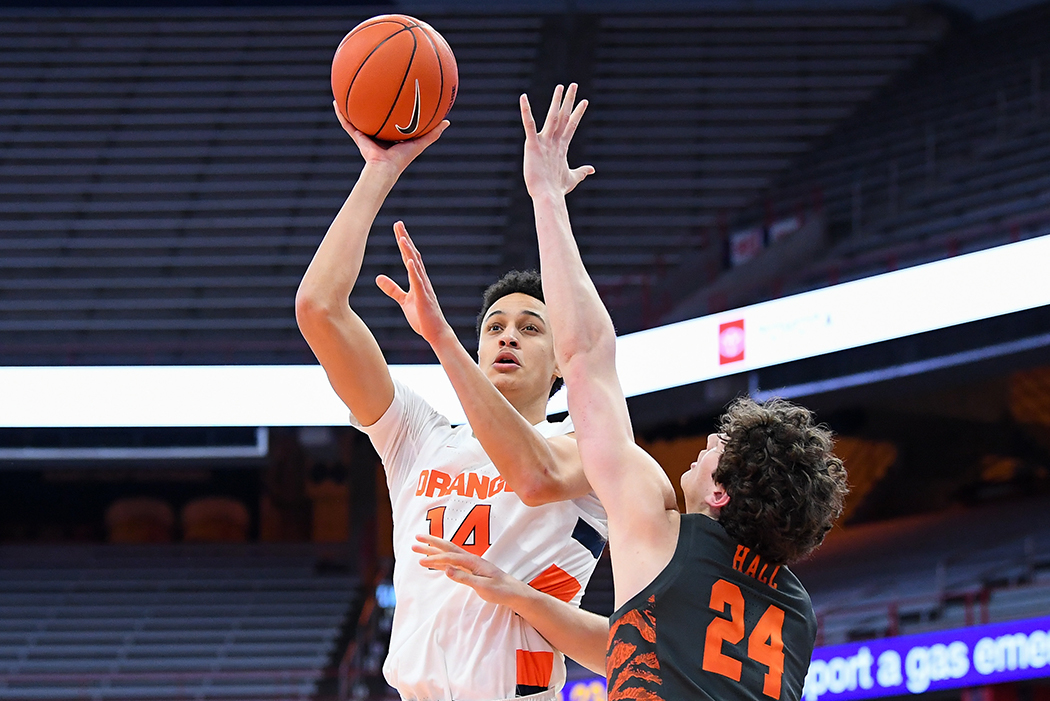 Jesse Edwards has seen the most minutes this season out of the next potential centers on the team. But he’s played less than 100 minutes in the season so he has a long way to go before he can make Boeheim’s starting lineup. Rich Barnes | Courtesy of USA Today Sports

Syracuse made a December offer for Brandon Huntley-Hatfield, a 6-foot-9 2022 big man with offers from high majors such as Tennessee, Auburn and Kansas.

Huntley-Hatfield is ranked No. 6 in his class of centers and could be a marquee addition to the frontcourt if the Orange are able to secure his commitment. He might be the long-term answer, but he still doesn’t address the immediate short-term issue of next season.

The Orange could hope that Edwards, Anselem or Ajak makes the leap to provide productive starting minutes. They could try to rely on Sidibe to stay healthy again, a move that backfired this season.

More likely than not, though, the question mark at center position will continue into the 2021-22 season, unless the Orange find a transfer ready to provide starter’s minutes.

The transfer portal is gonna be out of control over the next month. Already 20 names in there today …

Syracuse’s recruiting at center in the last five-plus years have culminated in the issues this season. Since Rakeem Christmas in 2011, DaJuan Coleman was a top-20 recruit when Syracuse added him in 2012. Paschal Chukwu transferred in from Providence and was a consistent starter for SU but rarely offered any offensive production. Sidibe was rated 190th in his class. The Orange had other players who might have been able to play center, like Taurean Thompson, but he transferred to Seton Hall after his freshman season in 2016-17.

If the Orange brought in a transfer center to start next season, that could have a domino effect for current developing players on the roster. With only so many minutes to go around, it could lead to departures.

The Orange need their anchor in the middle of the zone, and there’s no clear answer to the position that’s arguably the lynchpin of the defensive scheme.

“For as much as the zone can hide a bad defender, you need a defensive-minded center to anchor the zone that is the solution for hiding other guys,” a scout said.

The post A look at Syracuse’s future at the center position appeared first on The Daily Orange.