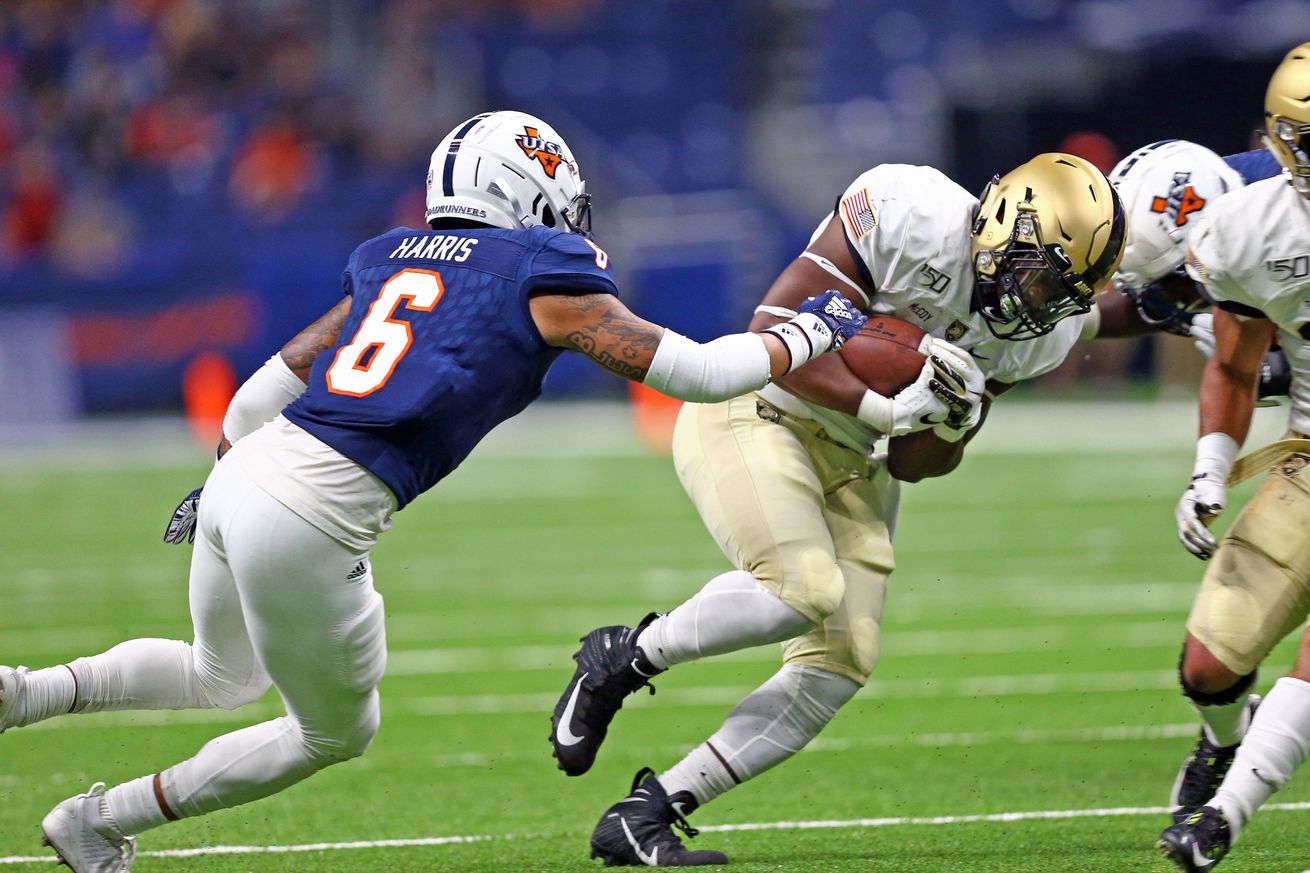 Has Army has cleaned up enough on offense to outscore the Roadrunners?

At 4-1, it’s hard to be mad at Army’s current record but that doesn’t mean there isn’t any room for improvement. For this team, those improvements will hopefully come on offense as they meet the UTSA roadrunners for their second road game of the season.

The Black Knights defense has been steadily chipping away at opponents, holding them to just 12.6 points per-game, the seventh-best average in the country. But on offense, the Army hasn’t been as successful.

Last week, against The Citadel, the team managed just 153 rushing yards and averaged 3.1 yards per carry.

“I think that we need to block and be able to sustain blocks in the running game. That’s an area where we need to improve,” Army head coach Jeff Monken said earlier this week. “And we’ve done that very well at times this year. We didn’t do it particularly well on Saturday, but we’ve got to do that consistently if we’re going to be the offense that we want to be.”

UTSA started off their season strong with wins against Texas State and Middle Tennessee, but after two straight losses on the road, the Roadrunners are looking to get their schedule back on track.

Quarterback Lowell Narcisse has been dubbed a “dual threat” quarterback in Texas. Against BYU, he completed 19 of 25 pass attempts for 263 yards and rushed for 79 yards. BYU is currently ranked 14th in the nation and was arguably one of the more challenging opponents on their schedule. But even a 20-27 loss is something to hang a hat on.

However, Nacrisse isn’t the only UTSA quarterback in the lineup. Earlier in the fall, Frank Harris was the one “to watch.” Before suffering a knee injury against Middle Tennessee in week three, Harris netted three touchdowns, two interceptions and completed 64.5 percent of his passes for 566 yards.

Following MTSU, grad transfer, Josh Adktins, yet another quarterback helped lead the team in Harris’ absence. He threw a touchdown on his own before suffering an injury during a scrimmage before the team met UAB. It’s unclear who exactly will be the starter in this Saturday’s matchup but UTSA clearly isn’t short on talent.

Along with QB, running back Sincere McCormick will be a major weapon that Army will have to stop. McCormick has totaled 569 rushing yards thus far, averaging 3.8 yards during last week’s game adjacent BYU.

In 2019, UTSA finished the season 4-8 overall, 3-5 in their conference. This year, the Roadrunners are going in almost the complete opposite direction it seems.

“They just look like they’re playing very confident football and playing like a team that expects to win – playing fast, executing very well. They’ve been in some close ball games,” said Monken.

Nate Woody and the defensive crew might not be enough to keep Army above the fray in this matchup. Ranked 13th in the nation, UTSA is right behind Army in turnover margins with three fumble recoveries and interceptions.

Of course, Army has one of the major keys of triple option locked down this season — the possession battle. If the Roadrunners offense proves to be too much handle, this, like against The Citadel, could be the key to another victory.

Watch: CBS Sports Network — Dave Ryan will handle play-by-play with Corey Chavous as the analyst. The sideline reporter is Justin Walters. Active and Reserve service members can also stream the game for free.

Spread: Most sport books have Army favored at -8, with the over-under at 49.