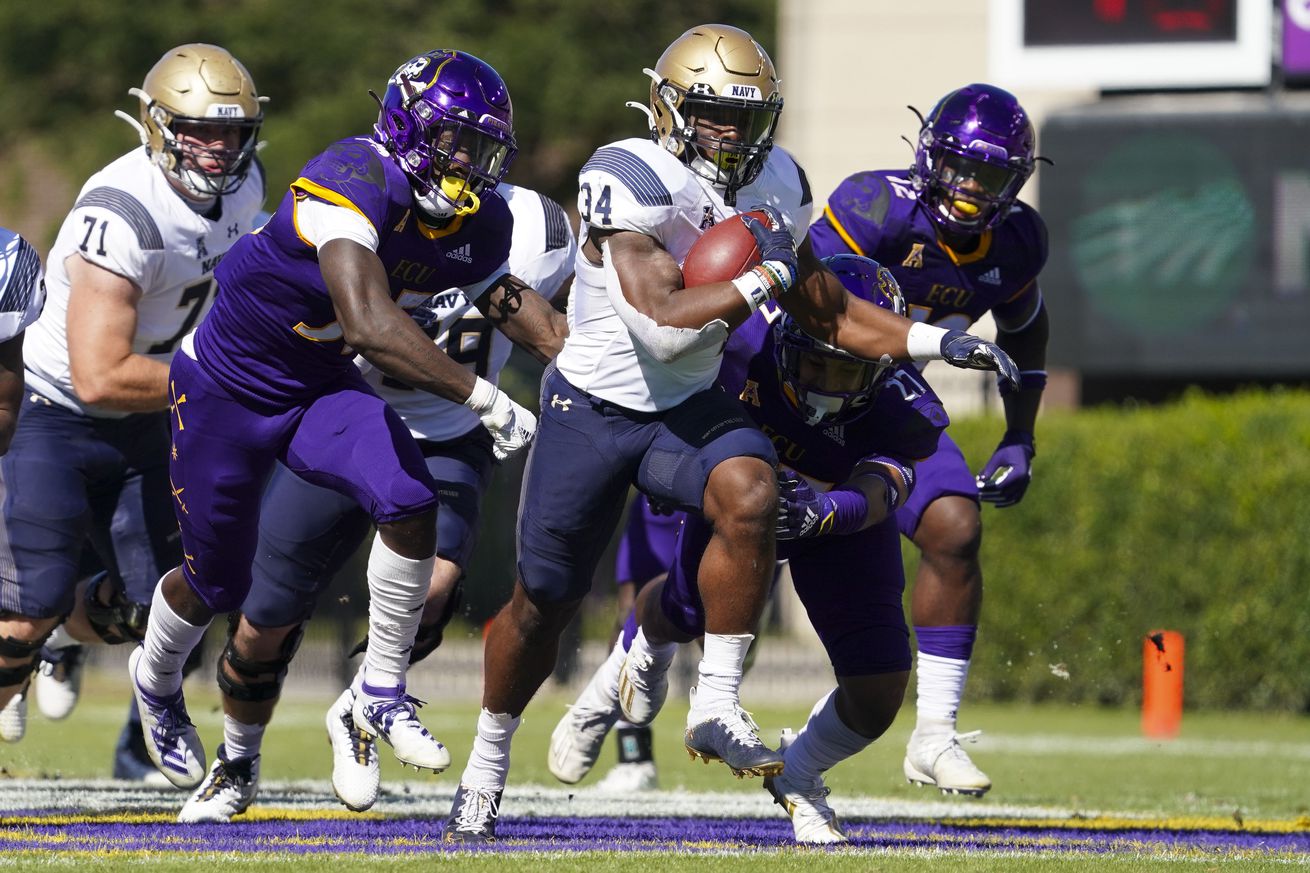 The Midshipmen are now 3-0 in American Athletic Conference play after a trip to Greenville.

GREENVILLE, N.C. — After two blowout defeats and two narrow wins, the Navy Midshipmen were searching for consistency. They found it in their fullbacks at Dowdy-Ficklen Stadium.

Senior Nelson Smith surpassed 100 yards rushing for the second straight game, and he and junior Jamale Carothers both found the end-zone again, just like they did last week against Temple. On a chilly Saturday afternoon, Navy rode its fullbacks to victory as the Midshipmen won 27-23 over the East Carolina Pirates, improving to 3-0 in American Athletic Conference play.

“Super proud of our team to come on the road and get a hard fought win. I thought the defense played awesome today; just gave us a chance when we were struggling on offense to move the ball,” Navy head coach Ken Niumatalolo said. “I think right now on offense, the B-Backs, along with the line, have kind of sparked our team. They’re running physical, getting hard yardage, the line is blocking good inside… Really proud of them.”

It wasn’t always pretty for Navy on Saturday. On the fourth play of the game, Dalen Morris overthrew his target and had his pass stolen out of the air by a Pirate. Carothers fumbled away Navy’s third drive of the game, Bijan Nichols misfired on an extra point attempt in the second quarter, and the Mids’ defense gave up a big play late, allowing ECU’s Rahjai Harris to scamper away for an 80-yard score.

But other than that, Navy played pretty well.

Smith got going early. To cap of a six-play drive for Navy in the first quarter, he received a short toss to the right, broke a tackle and rolled ahead for 20 yards and a touchdown. He found the end-zone again in the third quarter, running off tackle for a 29-yard pick up on his way to pay-dirt. In all, Smith covered 157 yards of ground on 17 carries, good enough for a 9.2 yards per-carry average in addition to his two scores.

“We like hugging Billy Honaker and Peter Nestrowitz. I love running behind those guys,” Smith said. “They really open it up for me.”

Carothers would make up for his fumble later too. Near the end of the third quarter, Navy was in the red-zone, faced with a fourth-and-two. A field goal would’ve increased the Mids’ lead to 10 points, but Niumatalolo opted to roll the dice. He handed the ball to his bully, Carothers, who picked up three yards and muscled his way into the end-zone. It ended a 12-play drive that covered 50 yards in about five-and-a-half minutes. Carothers finished the day with 82 yards on 18 carries.

In all, the two fullbacks combined combined for 239 yards and three touchdowns on the ground. The offensive line usually made good holes for them to burst through, but even when the lanes weren’t there, Smith and Carothers created them with their bruising shoulders, churning legs and determination.

“It’s just a testament to our offensive line,” Smith said. “They were blocking their ass off, especially these last two games, and we just kind of followed their lead. They opened up the holes for us and we just hit ‘em.”

Aside from the Pirates’ big run in the fourth quarter, Navy’s defense was mostly stout and played with a bend-don’t-break attitude. They halted East Carolina in the red-zone three times in the first half, holding them to a pair of field goals and blocking a third. ECU picked up its first touchdown near the end of the second quarter thanks to a short run from quarterback Mason Garcia.

The Mids forced the Pirates into three punts and two fumbles. In his return from injury, star linebacker Diego Fagot led the unit with 12 tackles, two of which were for a loss and one of which was a sack. Also returning from injury was Tama Tuitele, who finished with eight tackles and a forced fumble.

“We were able to just dig deep there in the red-zone and Coach Newberry made some great calls there to give us a chance,” Fagot said. “We had a good day… It wasn’t perfect.”

Navy didn’t finish the game unscathed though. In the third quarter, Morris was hit while trying to slide and appeared to suffer an upper body injury. He was taken out of the game and an ECU’s Jireh Wilson was ejected for targeting. Sophomore linebacker Terrell Adams also left the game with an upper body injury.

Before leaving the game, Morris did score the first rushing touchdown of his career.

Junior Tyger Goslin stepped in under-center and played admirably; much better than how he looked at Air Force. Goslin guided the Mids’ offense to two scoring drives and — perhaps more importantly — executed the offense in the fourth quarter to burn some crucial time. With its final possession, Navy covered just 32 yards in 11 plays, but grinded 6:11 off the clock.

The drive nearly stalled out when the Mids were faced with a fourth-and-two with 3:16 to play. Niumatalolo could’ve punted and trusted his defense. Instead, he gave the ball to his fullbacks again. Smith rumbled forward just enough for a first down, and then Carothers extended the drive with a 15-yard pick-up.

“There’s no analytics. It’s all gut-feeling, just looking at the course of the game,” Niumatalolo said of going for it on fourth down. “Some gambles, fortunately, worked out for us.”

ECU had to burn both of its timeouts. When the Pirates finally got the ball back, they were on their own 15-yard-line with 22 seconds to go. The Pirates managed to run four plays, the last one ending with a lateral that was picked off by Jackson Perkins.

Navy’s final drive proved to be a masterclass in clock management and defense bleeding.

“As a back-up quarterback, my role is to be ready,” Goslin said after the game. “The last drive, it just shows you — Coach Niumat says it all the time, how hard it is to win — it felt like every single yard we were getting was a scrap… I feel like we did our job at the end there. Can’t complain about a W.”

While the Mids can feel good about this win and their 3-0 start in conference play, their schedule doesn’t get any easier. Next up is a home game vs. Houston before traveling to No. 17 SMU on Halloween.

Loving Saturdays with the boys!!!