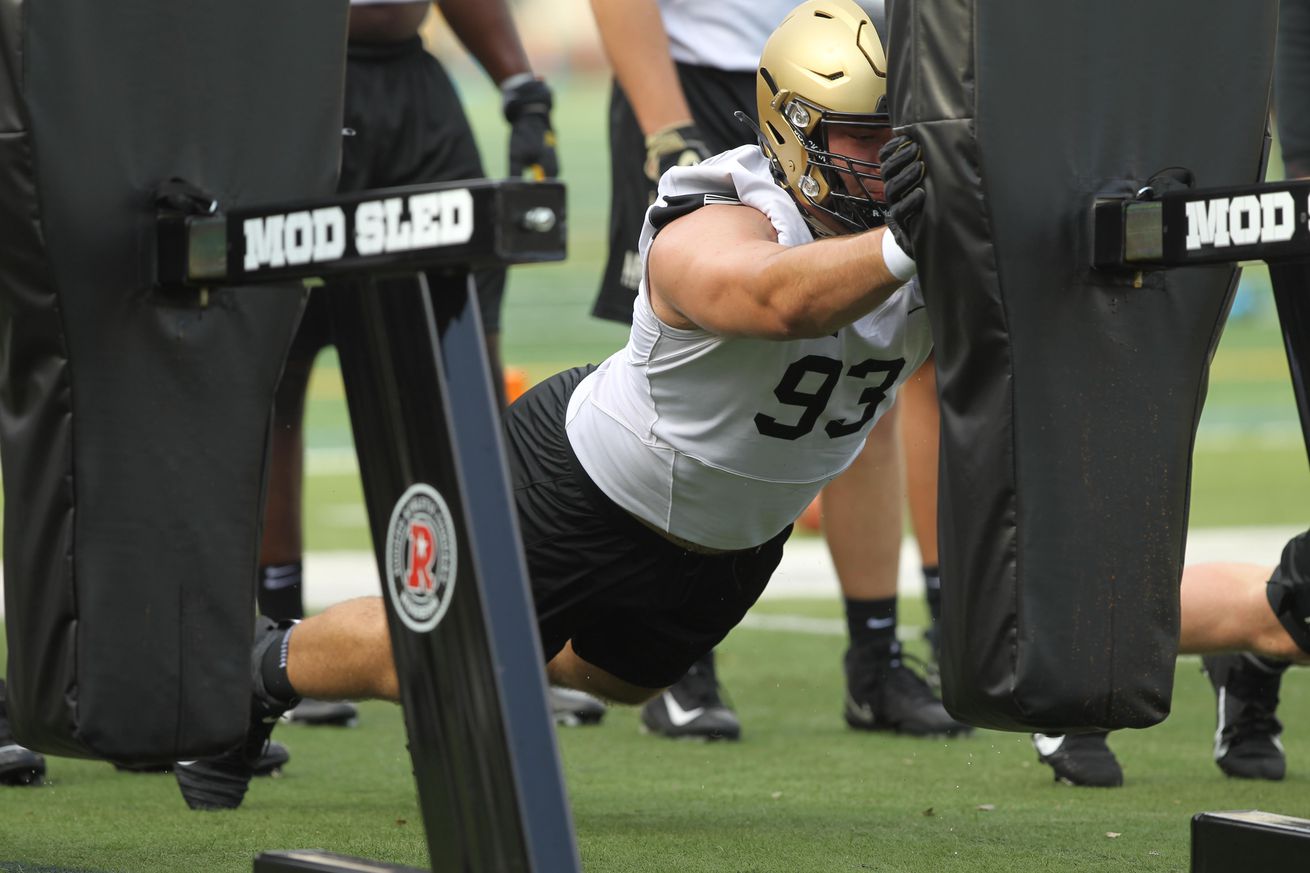 Junior and senior linemen put 2019 in their rear-view and are preparing to meet whatever the 2020 season turns out to be.

For Kwabena Bonsu and Edriece Patterson, Army defensive linemen who have seen the very high and drastic lows of Black Knights football, the creation of an almost entirely new defensive coaching staff has lit a fire under them and their teammates.

“From day one as soon as we got back on campus the energy was just different, everyone [was] locked in just ready to go,” Bonsu said. “After last season, left a sour taste in our mouth so everyone’s just ready to get back, get after it, and show college football what we’re really about.”

On the heels of their season-opener against Middle Tennessee State University, Bonsu named himself as one of the “unlucky guys” that didn’t have a weight set at home during quarantine. Though undeterred, he like many other college athletes, improvised under less-than-favorable conditions.

One solution for him: He went to a supply store, bought a few bags of sand, threw them in a duffle bag and lifted that.

“[I] had a big field across the street from me, so, you know I was over there in the mornings,” Bonsu said. “Just feet conditioning and stuff like that over the last week of quarantine.”

Patterson did some of same — using his high school as a resource for weights and rallying together rookies in group chats to pair up with vets and keep in contact with the team members. The senior lineman said coming back on campus was the culmination of months of individual hard work and an opportunity to redeem themselves from the previous 5-8 season.

“At first, when we got back, we couldn’t really lift and be on the field and do everything together, but we would have small group meetings, some times it would be positions,” Patterson said. “Now, being on the field with everyone, the energy is great.”

Following months of Zoom and FaceTime calls and group texts, Army is now facing a season with a vastly modified schedule, the first two of the 12 games limited to attendance by cadets.

“The biggest thing that Coach Monken has been preaching to us is it’s Army versus Army every single game,” Bonsu said. “So as long as we make sure we don’t beat ourselves it doesn’t matter who pops up on the schedule.”

An attitude of preparation for whatever happens has only been intensified by the coaching staff, particularly on defense where Army made considerable additions earlier this year. Following the 2018 departure of then defensive coordinator, Jay Bateman, the Black Knights took a downward turn on that side of the ball in 2019.

The Black Knights then pried Nate Woody away from Michigan and made him their new defensive coordinator. Shortly after, Army brought on another member of the Michigan staff, making Tank Wright its new defensive line coach this past April.

“Coach Tank” as he’s known by the team, shows up to 7 a.m. meetings full of energy. And, as Patterson tells it, Wright shows up to practice with his own cleats on.

Wright, along with the other defensive staff, is harping on new pass rush techniques that will hopefully make for a revived Army defense. Black Knights have come to call Wright’s techniques as “Tank’s Toolbox.”

“I always tell them ‘it smell nasty, but it taste good.’”

Whether it’s finesse moves, speed to power, the get off, a bull rush, whatever — Wright hopes this diverse “menu” of techniques will hopefully focus and invigorate the defensive line.

“I always tell them, ‘It smell nasty, but it taste good,’” Wright says. “I want our guys to knuckle up and fight through.”

Patterson finished last year with five tackles for loss and three sacks, while Bonsu capped 2019 off with six tackles for loss and two sacks. The pair is betting on high intensity, the pace of Wright’s style and his new teachings to invigorate the defensive line, composed mostly of veterans.

“Obviously after last season you know, there was a lot of things that we had to work on, especially right after the Navy game,” Patterson said. “Following that game we talked about it as a team. We all knew that we needed to come back here and get to work. Everyone’s demeanor changed.

“And we’re gonna make a statement this year.”